[Editor's Note] In light of Rodney Harrison's inevitable retirement announcement, I thought it fitting to re-post this story written by our very own JohnHannahRules after Rodney was injured.  Enjoy.

For this fan, the defining image of Rodney Harrison will always be a scene from the aftermath of the 2003 AFC Championship.  The Patriots had just defeated the Colts.  Peyton Manning had been picked off 4 times, and  Harrison had led off that string in dramatic fashion.  After the Patriots took the opening lead, the Colts drove the length of the field.  It was beginning to look like the game might be a shootout—not something you wanted to engage the Colts in that year.  But on 3rd and 5 from the Patriots' five, Rodney stepped in front of a Manning pass in the endzone to snuff the drive.  Manning never found a rhythm after that, and as we all remember, the Pats went on to victory, 24-14.  It was a monster game from the Patriots' defensive backfield, from Eugene Wilson’s crushing hits to Ty Law’s three interceptions. 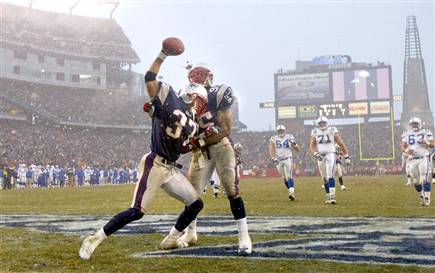 In the confusion and clamor of the post-game field, NFL Films caught Belichick and Harrison in a celebratory hug.  "Great game, great game," Belichick was saying.  Rodney, eyes red and bathed in emotion, pulled back from his coach and said, "Thank you.  Thank you."

For a brief second, the curtains Belichick keeps drawn parted very slightly, and a sliver of the man shone through.  "Thank you," Rodney said.  "You bet," Bill replied, and in the tone of his voice and the look on his face, you could see what makes men into coaches.  In just two words, Belichick was saying: I chose you because I knew you were the vessel I needed.  I always knew it was there and you proved me right.  Don’t thank me.  I’m thanking you.  You are my soldier, you are my safety.  Thank you.

Then the curtain snapped shut: "One more, now."  The Super Bowl, of course.

It has been noted: 35 years is old for a safety.  Those of us beyond the gateway of youth know that, finally, the body is not as resilient as it once was.  It is quicker to complain, slower to recover.  We hear this from our older brothers, from our fathers, but we always laughed, never believing, until one day after a routine workout or a pick-up game of basketball, we woke up feeling bruised and battered.  And then we slowly shook our heads, understanding:  Youth is finally gone.  For a man to be playing safety in the NFL at the age of 35, particularly the way Rodney plays the game, is proof of toughness.  I doubt there’s a night between late July of one year and early July of the next where Rodney Harrison goes to sleep pain free.

On Monday night, Rodney was at work doing something with his body that few of us could have contemplated in our prime.  Quickness is the capacity to change direction without losing speed.  It is an ability that blooms early and fades.  The cognoscenti see that while Rodney’s mind for football is perhaps sharper than ever, his body no longer responds with the whip and elasticity of even two years ago.  On Monday night, making a cut back to his left against the full-speed momentum of his body, Rodney’s right quadriceps finally let go.

A devastating injury.  It would sideline a 20 year-old for the season and even he might not be the same again.  For a 35 year old, well, that’s probably the final chapter of a career.  We all agree.

At the beginning of the season, when young Shawne Merriman seemed determined to play for the season on one knee ligament, I wrote this about loving a game:

They squeeze you for every ounce, push your psychology to the limit. You're desperate to make the team, prove yourself, live up to the expectations of the coaches, your teammates, your self. And when they threaten to take it away, to tell you, "Hey. Sundays are over for you," you do anything to keep it. You know how I know Rodney Harrison loves the game? Because Mr. Harrison, a good man, resorted to HGH to get himself back on the field. He was desperate and he was scared that they were going to take his Sundays away.

In retrospect, perhaps that will look like a tactical gambit in the face of advancing age.  But the Sundays are very likely over now.  Though I wouldn't put it past Harrison  to try to take one more bite of the apple.  His motor runs at full speed, in the weight room, at practice, on the field.  It can't be easy to shut that down.

Two days ago, NFL.com’s Adam Schefter wrote that Harrison should garner Hall of Fame "consideration."  My response was an emotional shot from the hip:

If he never plays again, Rodney Harrison is still a shoe-in for a bust in Canton. For almost a decade and a half, he embodied the strong safety position. While his will to take on runners and play ‘inside the box’ was reminiscent of Ronnie Lott or Steve Atwater, in his prime he was also an instinctive covering safety with a nose for the ball. Patrolling the defensive backfield with remorseless ferocity and tireless energy, he was an emotional leader of every defensive unit for which he played. In spite of a reputation tinged with a Dobleresque viciousness, Harrison was a very heady footballer. A "coach-on-the-field" type, Harrison anchored the Patriots defensive backfield under head coach Bill Belichick during a time when Patriots defensive schemes were widely regarded as the most varied and complex in the NFL. A fan favorite, deeply respected by his teammates and coaches, Rodney Harrison is one of the best players of his generation.

I got a little carried away, maybe, but that was Rodney’s true magic.  Thinking about him as a player, playing with him as one of his teammates—even talking or writing about him as a fan or journalist—you tend to get a little more amped up.  Not in an angry way, but in a swashbuckling, king-of-the-universe, baddest m-f on the field sort of way.  Heath Evans:

"What he brings to practice, what he brings to this team on game day, and then you get into his years of leadership, years of playing this game – the loss is huge.  He’s a player that I wish I could be more like him on the field.  He’s someone that plays with his reckless abandon but still seems to find a way to be in control and make plays.

I can’t say enough good things about him."

So.  With that sort of injury to a man of a certain age, we may not see him again with a helmet on.  Antwain Spann has been signed off the practice squad.  Brandon Merriweather will get Rodney’s assignments.  The sporting press is full of speculation on how New England will fill Rodney’s shoes.  Will it be John Lynch?  Will we sign Ty Law off the street for some veteran skills?  What’s the next move?  Nobody knows.

And I don’t much care, to be honest with you.  The Game will grind on—that’s the only guarantee.  On a radio interview a couple of weeks ago, Tennessee head coach Jeff Fisher made an interesting remark.  He said that when players come into the league, all they’re thinking about is making that first play, playing their first down in the NFL.  But very few of them understand the truth:  It’s their last play that’s very close.  All they can do is hope to hold it off as long as possible.

I suspect he’s gone from the field for good.  And if he prays, I bet he’s praying for a man in a gray hooded sweatshirt to walk through the door and remind him: "One more, now."  But I don’t think that’s going to happen.  So I just want to say this:

Thank you, Rodney.  Thank you. 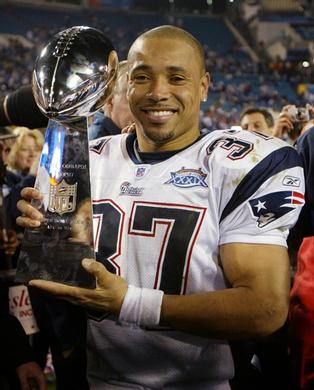