Share All sharing options for: Pats prepare for Indy - a few quick thoughts

After a loss to AFC South rival, the Tennessee Titans, the 3-4 Colts are out to prove something.  Guess who's in the way?  Yup, Matty and the boys.  There are  problems on each side of the ball, but to sum it up - not firing on all cylinders.

For the Patriots, the most obvious place to start is at quarterback.  The team, having enjoyed an impressive run over the Brady years, is suddenly without all that experience at the helm.  I say experience because I think Cassel is beginning to show flashes of the things that make top tier field generals who they are.  In the Broncos game, Matt ate fertilizer for 6 sacks.  St. Louis?  3.  Different teams and different defenses, most assuredly, but what I saw was a young QB getting a bit more comfortable in the pocket.  Why do I believe this?  I saw the ability to move vertical in the pocket vs. get jittery and go sideways.  He was stepping INTO the pocket, giving him the momentum to throw the ball.  And he hung there.  I recall one throw where a defender was a millisecond away from crushing him before he let go of the ball.  Earlier in the season, he would've been shaken and gone sideways.

The DBs worry me.  With Rodney Harrison gone, we've lost the defensive on field coach so important to that group.  Brandon Meriweather is doing a decent job, but he's not there yet.  He's not putting himself in the box as much as Harrison did.  Our CB situation is a little shakey as well.  Jonathan Wilhite got torched when he had assistance from Meriweather; he simply didn't turn around.  Ellis Hobbs suffered a couple of those as well.  I simply don't see the swagger so important to that position.  Remember Asante?  Swagger up the wazoo.

On the positive side, Randy Moss is getting better on the inside routes.  I still cringe everytime I see him turn inside, but his footwork has progressed, very Welker-like.  Richard Seymour and Adalius were HUGE at generating pressure, something we haven't seen for a while.  They made the corners difficult to get around, ultimately containing the Rams to 90 yards on the ground.

In my mind, Kevin Faulk was the game MVP.  With 60 yards rushing and 47 yards receiving, he was all over the field and a major threat whenever he lined up, which was often due to the battered RB corp.  Quite simply, he does what has to be done, including pulling in a beautiful floater from Cassel for a highlight reel TD catch.  Just awesome.  I leave you with that image. 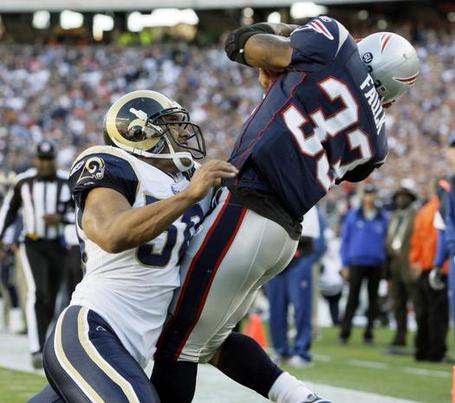