Share All sharing options for: BigBlueShoe dominates the Pats fans

I've done it. I'VE DONE IT! I've taken over Pats Pulpit. From now until Saturday, I will run this blog that has for many years been the mortal enemy of Stampede Blue. There are so many things I want to do I just... I just don't know where to begin. One thing I was hoping to do was go around delete all the "Manning Sucks!" FanPosts and stories.

But, surprisingly, I don't see any.

Could it be that the fans of the dreaded and vile Patriots have finally accepted the fact that Peyton Manning is indeed a great QB? If so, wow. I now have faith that peace in the Middle East is possible, a black woman will one day be President, and flying cars are just around the corner. I think this season, more so than any other, we fans see why the NFL needs a healthy Tom Brady and Peyton Manning. 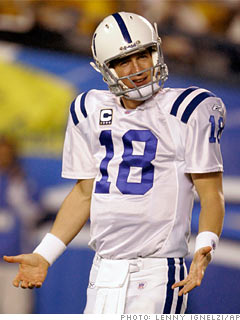 Why don't y'all hate me no more?

Let's be honest folks, I don't think the NFL brass are jumping for joy that Manning is playing sub par, Brady is out, and Palmer is about to be out. Replacing them are an ancient Kerry Collins, Kyle Orton, and Jason friggin Campbell.

Someone shoot me, please.

Unlike the Colts, the Patriots have  managed to eek out a solid 5-2 record despite suffering two devastating injuries. The Pats do not seem to excel in any one particular area. They just play solid in every facet, and do not beat themselves with dumb penalties or costly turnovers. Also, LB Jerod Mayo looks like a future star, Matt Cassel has quietly played some solid football, and Kevin Faulk continues to do what Kevin Faulk has always done: Score TDs and drive people like me CRAZY!

I think, more so than any other year (even the Super Bowl years), Pats fans should be proud of their team. Other teams might have folded up and quit after Brady went down in Week One. This one didn't. That says something, and don't think your rival fanbase hasn't taken notice of it.

For the next few days, I will post stories and FanShots that will offer you a Colts fan's take on your team. Believe me, it is far too easy to say you suck! and simply dismiss your Pats as a shell of their former selves. One, it isn't true, and two, because to truly know your enemy you must walk around in his skin. And that is exactly what me and MaPatsFan are doing these next few days.