Should the Colts beat the Patriots this Sunday night in Indianapolis, it would put Indy's record at 4-4. That is a record not ideal at this time of year, but it is not something to dismiss off hand. Back in November of 2005, the New England Patriots, fresh off their second straight Super Bowl winning season, lost to Indianapolis in Foxboro. They started November 2005 off 4-4, and went on to win their division at 10-6. That season, the Patriots suffered through some devastating injuries. Many had written them off at 4-4 in November, but they somehow managed to claw their way back. The Patriots went on to win a playoff game, but lost in the second round to the Broncos. In 2008, the Colts are in a similar situation the 2005 Patriots were in: Injured defense, inconsistent play, and questions as to whether or not they will make the playoffs.

New England's 2005 team stats had their offense scoring 24 ppg and their defense surrendering 21 ppg. During their opening 4-4 stretch, they surrendered 27.5 ppg and scored only 22.5. The current 3-4 Colts are scoring 21.3 ppg and surrendering 23.1 ppg. New England in 2005 had to contend with numerous injuries to various key defensive players like Tedy Bruschi, Rodney Harrison, and Richard Seymour. They lost Ty Law to free agency in the off-season that year, and on offense thier starting LT, Matt Lyght, was done for the year. Corey Dillon broke down, teams seemed to run the ball on the Patriots at will, and their homefield advantage lost its mystique.

Yet, they gutted it out and salvaged their season. How?

Well, first off, playing in the horrid AFC East certainly helped. The Dolphins were mediocre that year, and both the Jets and Bills sucked. So, having an easy schedule is a good way to dig yourself out of a 4-4 start. Most of their difficult games were in the 4-4 stretch while the bulk of their lunch meat schedule (aka the AFC East) was in the second half. Obviously, this is no comfort for the Colts, who pretty much have a hard schedule from start to finish. The next three game are New England this Sunday, then at Pittsburgh, and then Houston in Lucas Oil Stadium. None of those teams are lunch meat, including Houston who has won three in a row after blowing their game against the Colts a few weeks ago.

But what also helped New England eek out a playoff birth was the steady play of Tom Brady. Other than 2007, Brady's 2005 was one of the best statistical seasons of his career. He threw for over 4,000 yards and 26 TDs that year, completing 63% of his passes. He also threw 14 INTs, but considering his running game was pretty inconsistent, that's good. 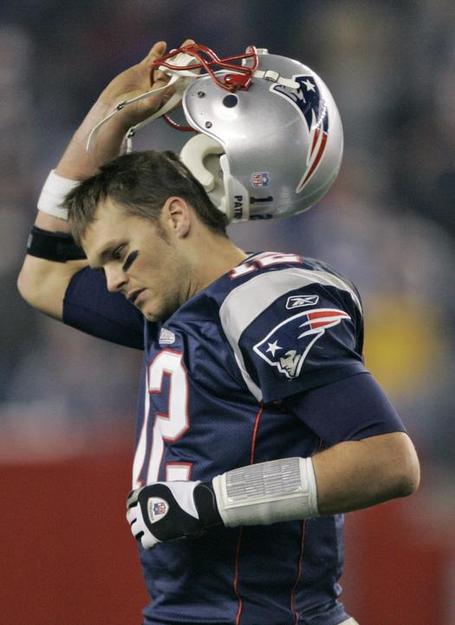 If the Colts are to stablize their team and dig out of the current 3-4 hole they are in, they must get more consistent play from Peyton Manning. Peyton has been up and down all year. It is a combnation of injuries, unfamiliarity with new players, missing training camp, missing preseason, and poor execution. He has thrown 10 TDs and 9 INTs, complting only 61% of his passes. That is very un-Peyton-like.

Just as Tom Brady's steady play was the key to New England slavaging their season in 2005, the Colts must get better, more consistent play from Peyton Manning if they are to salvage their 2008 season.