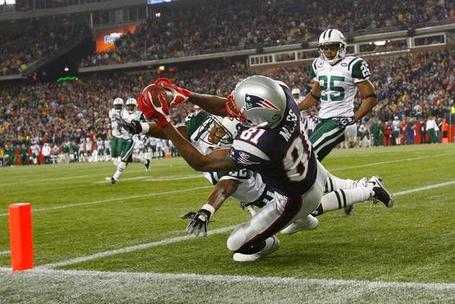 I don't like losing.  In fact, I hate losing games that easily should've been won.  This game was not one of those.  Coming back from a 24-6 deficit to drive this game into overtime was incredible; inspiring, if you will.  Forget all the pundits who say this team is a shell of its former self.  They are damn good and, as the list of injured or IR'd players grows, they STILL continue to scare the living daylights out of any team that underestimates them.

But the awesome effort of last night just wasn't enough to overcome the smoking start the Jets got off to in the first half.  Aside from any team affiliation and homerism you may have, this was an exciting game to watch.  Tons of yardage, huge plays on both offense and defense, and overtime made for a great night of football.  Unfortunately, the toss of a coin during overtime determined who got the ball and, as is often the case, possession is 9/10 of the law in OT.  Score first, you walk off the field a winner.  There's no chance for the opponent.  NFL OT sucks.  But, that's the rule and every team has benefitted or been bitten by it.

Stats-wise, this game makes little sense.  In a number of categories, the Patriots had a clear advantage:

Where things start to break down:

A very dubious defensive holding penalty against Vrabel with 3:38 left in the game was a difference maker, in my mind.  Bringing the ball from the 7 to the 3 may not have been the key to NYJ taking the lead (they could've scored from the 7, but we'll never know), but it's there and certainly a factor.

With a better defensive stand in the first half, we would've crushed the Jets.  Cassel proved shutting down Moss and Welker simply won't do the job.  Ben Watson (88 yards) and Jabar Gaffney (86 yards) both had TDs while Wes Welker, smothered all night, STILL had 108 yards.  Let's also give credit to the pig pile; many times, Cassel could've consulted his arm band for the appropriate play and then thrown the ball.

The 7-3 New York Jets now sit atop the AFC East with 6-4 NE in 2nd place and 5-4 Buffalo and Miami bringing up the rear.  Get ready for all the hype proclaiming the second coming of His Favre-ness.  It'll be ridiculous this week.

Props to fans from other blogs for stopping by and chatting it up.  Very cool.  Frankly, that's one of the main reasons I do this - chatting with fans from everywhere.  Wait, I think I have something in my eye...