Bring on the Tuna! Pats face the 'Fins this Sunday

Share All sharing options for: Bring on the Tuna! Pats face the 'Fins this Sunday

So last week, I was in Fort Lauderdale. I know, no one's feeling sorry for me, right?  I was meeting with my new boss, so it wasn't all fun and games.  But, it WAS all wrong.  I'd look at the date on my cell phone, see an 11 where the month was, and walk out into high 70's temperatures.  That's not right.  I mean, this is football season and it's supposed to be cold, right?  Today, a Florida-based co-worker told me it was freezing and he had a coat on in his house; outside temps had hit (are you ready for this?) the mid 60's.  THE HORROR!!  I cut & pasted the weather report from my zip code - 37 degrees.  No more whining.

In 2007, the 1-15 Dolphins were the laughing stock of the AFC East and most of the league.  The CamCam feel good era (why don't you sit this practice out if you're not in your happy place) had turned the team sideways and did a crapload of damage to a once storied franchise.  I'm sure Don Shula had a contract out.  Then "The Tuna" rolls into town. 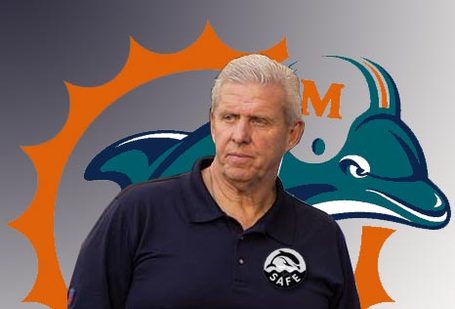 Now, we all know what Bill's about.  He doesn't coddle and he doesn't give a rat's a$$ about your feelings.  As head coach of the New England Patriots starting in 1993, he took us to 2 playoffs, including a Super Bowl.  Riding into Miami, he promply fired CamCam and his loser staff and threw away their meditation beads while driving over the Japanese sand gardens with a bulldozer.  My way or the highway.  You wanna dance with the stars Mr. Jason Taylor?  Take a hike.  He's quietly and without much fanfare, reshaped a team that is absolutely wreaking havoc on the AFC and it's not because they're a juggernaut, mind you.  They're simply winning games against AFC rivals, 5 to be exact.  In the world of playoffs and wildcard spots, besting conference opponents is king.

This is why the Patriots need to go deep sea fishing.  They need to Squish the Fish and be rather deliberate about it.  After an embarrassing loss in game 3, it's time to seek revenge.  Forget about our Patriots looking like the orthopedic ward.  It's time to get us some fish and do it in front of a packed Miami house, just like they did to us (I was at Game 3 and have been told by Marima and JHR I can never go again).

Joey Porter?  Hey, great sack record and all, but Matt's no longer got that deer in the headlights look, K?  I think Matt, Randy, and the boys have a few things to say and they come in sevens.  Welcome to Hoodie-ville.