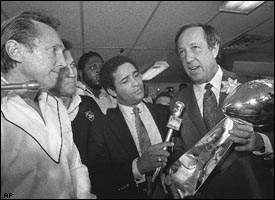 When Al Davis walks into the "Black Hole" at Oakland-Alameda County Stadium on Sunday and looks across the field, he may receive a bit of a fright.   There, reflected in the 21st century New England Patriots, he'll see the ghost of a young Turk with pompadoured hair and a confident, almost cocky, air about him.  The Patriots’ collection of last-chance veterans and untested rookies will seem a mirror image of the Raiders in Davis’ younger days.  On the other side of the field, however, those Patriots with a grasp of football history will look down a long corridor of time and see only a funhouse reflection of themselves.

Davis was born in Brockton, Massachusetts in 1929. In 1963, at the age of 33, he was named the youngest general manager and head coach in pro football history. He led the Raiders to a record of 10-4 that season, and Davis was named coach of the year by a host of publications. The Oakland Chamber of Commerce named him “Young Man of the Year.”

What began with “Pride and Poise” quickly morphed into “Just Win, Baby,” as Davis discovered the value of veterans.  As the 60’s became the 70’s, pro-football, ever the conservative society, was undergoing the cultural upheaval already endured by the rest of the country.  “Troubled” and “difficult” players cast off by other organizations found in Davis a kindred spirit, if something of a contradiction: an anti-authoritarian autocrat.  Al loved to wrangle with the league.  He was Pete Rozelle’s personal nightmare, and later famously sued the NFL to move from Oakland to LA in a fit of pique over luxury boxes.  He was single-minded in his drive to win, once saying, “It’s a tunnel vision, a tunnel life.  I’m not really a part of society.”

The Raiders were a dominant AFL force throughout the 60’s and the 70’s, intimidating other teams and flinging the ball all over the field.  In 1969, Davis promoted a young assistant coach named John Madden to the top slot.  Madden was a great fit for the Raiders.  The merry leader of a band of misfits, Madden didn’t care what the guys did off the field as long as they showed up to play – and win – when the time came.  John “Tooz” Matuszak, Warren Wells, George Atkinson, “Kick ‘em in the head” Ted Hendricks – it seems like everyone on the team had a story.  And I wouldn’t be me if I didn’t mention one of the most fearsome offensive line duos of all time: Gene Upshaw and Art Shell. (If you’re interested, Pat Toomey did a great series on the Raiders for ESPN’s Page 2, here.)

They are too many to list, a veritable who’s who of 60’s and 70’s football.  The Raiders were the big older brother of the AFL.  As commissioner, Davis had lead the way to the merger and then made it stick by fielding highly competitive, physical teams for more than a decade.  He won three Super Bowls with his personnel philosophy, one with Madden at the helm and two with Tom Flores.  The last was a signature Raider win in 1984, a dominant effort over the Redskins keyed by Rod Martin and Patriots cast-off Jim Plunkett.

But at some point, Al Davis stepped through the looking glass.

It’s hard to say precisely when it all came down, but the Raiders organization has been sick for a while.  For poetry’s sake, you might pick 1992 as the date when things began to turn sour, when Al was voted into the Pro Football Hall of Fame.  If you’re feeling vindictive, you could choose the “Snow Bowl” (aka “Tuck Rule”) game.   In reality, there was no specific point.  Like old age, it has come on slowly, imperceptibly, but surely.

In the New England Patriots organization, however, Davis could be forgiven if he sees a ghost.  As the Raiders have fallen, so have the Patriots risen.  These AFL brothers have long been oddly intertwined: There’s Plunkett, of course.  Sugar Bear Hamilton and the phantom “roughing the passer” call by Ben Drieth.  The tragic Stingley-Tatum collision (followed by an emergency landing of the team charter in Oakland).  The Tuck Rule.  Just as the Raiders under Davis crafted champions out of cast-offs, so have the New England Patriots:  Mike Vrabel, unwanted by the Steelers.  Corey Dillon, a “cancer” in the Cincy locker-room.  Heath Evans, released by the Dolphins.  Rodney Harrison, too old.  Randy Moss, too old and a cancer.  Matt Cassel.  Who?  Like the Raiders’ cast of characters, the list is long and like Al Davis in his prime, Bob Kraft is a league heavyweight.

“Just Win Baby” has become “Do Your Job.”  It’s not as flashy or as brazen a motto, perhaps.  But it reflects a key difference: flexibility, adaptability.  Your eyes aren’t fixed on a desperate prize, but at the here-and-now.  What you have to do, today.  And it isn’t as simple as “just win.”  It’s a different kind of tunnel vision.  Al Davis still believes in his model: spread out the defense, stretch the field, intimidate the opponent when he has the ball.  In contrast, the Patriots are chameleons.  The defense changes almost weekly; it has for nearly ten years now.  The offense has gone from plodding and grinding, to dink-and-dunk, to a fireworks display, and back again.  Schemes are adapted to personnel and to the opponent.  The Raider Way is not the Patriot Way.

When the Patriots gaze across the field at the Raiders organization, they will see the AFL of the past.  But will both teams be looking at the future?  For the Patriots, it is to be hoped not.  The calcification, the intransigence of Davis should serve as a warning – if it is needed – to Patriots management.  Do not become too confident of your methods nor too sure of your plan.  In the last decade, we have seen no danger of that.  Indeed, this season has been a showcase of philosophical flexibility and personnel resourcefulness.

For the Raiders organization and all the faithful bozos in their shoulder pads and spikes and war paint, perhaps the Patriots will be an image of their future.  Hopefully, for the league and for the fans of Oakland, the time is coming when the spirit of Al Davis will outlast the manager he has become, and the Raiders will mount a “Return to Dominance.”

Just not this week.