What to fix: Running Backs

Share All sharing options for: What to fix: Running Backs 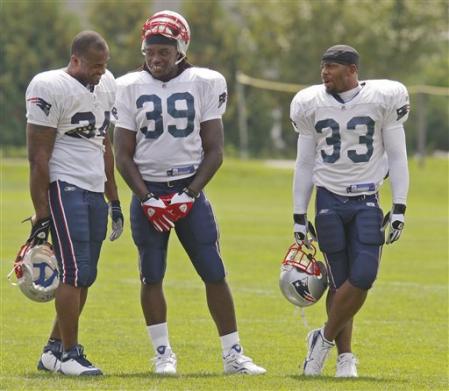 At the start of the season, I was stoked.  After 2007, the Patriots were accused of being an aerial team only, of having zippo on the ground.  Look a little deeper and you'll uncover 4 of the last 6 2007 games were 100 yarders for Maroney, but that's beside the point.  Belichick, after investing in our linebacker corps during the draft, made 2 excellent moves: undrafted free agent BenJarvus Green-Ellis and free agent LaMont Jordan.  Add Heath Evans to the mix and we were carrying 5 backs on the 53 man roster.  Depth up the wazoo, if you ask me.  Nuts?  Later in the season, we'd find out just how smart Belichick was.

Laurence Maroney missed the Week 3 matchup against Miami with a shoulder injury and would be IR'd on Oct 20th.  Sammy Morris was declared inactive in Week 10 and would see little action until Week 15.  LaMont Jordan, inactive for the Week 6 matchup with the Chargers, wouldn't return until Week 14.  During the "Lean Weeks", practice squad back, BenJarvus Green-Ellis, and fan favorite, Kevin Faulk, were left to carry the load.  Now, does anyone think we had too many running backs?

It's hard to fault him for being IR'd so early in the 2008 season, but I'm done with the Laurence Maroney experiment.  He's a decent enough back, but is fragile.  I also feel he tends to bounce off the line too much rather than slicing through holes like Morris.  The issue with cutting Maroney would be youth at that position; Jordan, Morris, and Faulk are all in their early 30's.  Wait, there's a solution: Law Firm.  BenJarvus Green-Ellis proved himself to be a physical, talented, hard working kid; just the kind of guy Belichick likes and probably the reason he was kept on the practice squad.  Jetison Maroney and elevate Green-Ellis.

Another interesting end-of-the-season move?  Backup G/C, Russ Hochstein, saw action as a fullback and blocking back.  He's even talked seriously about losing 30 pounds, putting him at a paultry 275, and making the change permanent (lookout Heath Evans).  Can you imagine the USS Hochstein clearing away DL's for Morris, Jordan, Green-Ellis, and Faulk?  Cool.

Jetison Maroney, promote Law Firm, and move Hochstein to fullback/blocking back.  What would do?