Share All sharing options for: Super Bowl XLIII, I remember those days

No, I'm not depressed.  With four Super Bowl visits since 2001, it would seem gluttonous to want more.  I should be happy with the 3 rings we already have.  Screw it, yeah it'd be nice to be there, for sure.  I'm not so much of a sad sack that I don't want to see my team in the biggest show around.  However, given all this team has gone through, I'm dang proud of their accomplishment.  The list of injuries and IRs reads like a starting lineup and yet we nearly foiled teams' chances that were playing the best football of their recent memories.  Have we answered the question of whether or not Belichick hit the QB lottery with Brady?  Huh?  Have we?

I'll be watching the Super Bowl as a football fan instead of a fan of one of the participants.  Plenty of Patriots will be providing commentary (Bill Belichick, Rodney Harrison) and Matt Light is tripping the light fantastic with Justin Tuck and Ray Lewis: 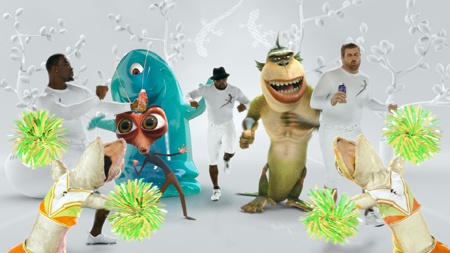 Check out some behind-the-scenes video of the commercial and you may come to the same conclusion I did: Tuck and Lewis got some moves, but Matt should stick to football.

Aside from the commercials, I'll be rooting for Arizona.  It seems almost surreal that they're in the Super Bowl after dominating a very poor NFC West, but that's the way the cookie crumbles.  NFL playoffs heavily favor division champions.  Getting all worked up over it is like frothing at the mouth about the insanely stupid and moronic NFL overtime rules, but those are the breaks.  At any rate, I hope they find a way to squelch the Steelers' defense which I think is one of the sneakiest in football.  I'm not taking away from any of their talent and the brilliance of defensive coordinator Dick LeBeau, but many of their hits, claimed to be "tough football", are on the hairy edge of unnecessary roughness.  Complain and players and fans alike are called sissies.  Bullcrap.  Anyway...

Grab a beverage, some hot wings, and a bowl of chili.  Crank up the tube and watch the greatest show on earth with a little Springsteen tossed in for good measure.  Let's pray at the temple of all things pigskin and have some fun.