Share All sharing options for: The impact of sidelining "Fast Freddy", Patriots RB Fred Taylor out for ankle surgery

I love Fred Taylor.  It's not in the man crush sort of way I love another Patriot, but yeah...I love Fred Taylor.  My dad tells me it's because I had the chance to interview Fred.  Well...yeah.  He gave me the time of day and was a super nice guy.  But that's not all of it.  What I REALLY like is the idea of Fred.  Now, before I get all existential or metaphysical or zen on y'all, let me just say I think you'll get it.

As most of you know, Fred was a Jacksonville Jaguar for the first 11 years of his career.  At that point, Jacksonville decided to jetison "Fast Freddy" in favor of their younger back, Maurice Jones-Drew.  For teams who rely on workhorse backs to carry the load, this was probably the right move for them.  Not so for the Patriots.  If you've been following this team, you know our current answer to the run game is "backfield by committee".  Whether by necessity or strategy, it's what we have.  It seems to be effective.  In 2008, we were #1 in the AFC East and #6 in the NFL for rushing.  You read that right.  NE?  A rushing team?!?!  Apparently.

Back to the Idea of Fred (SMP, I need a special Fred font).  Because we're a backfield by committee, we keep many different backs with varied skill sets.  Laurence Maroney and BenJarvus Green-Ellis would be our general purpose backs.  Sammy Morris may have been in that category until he became a receiving threat in our Baltimore Ravens matchup.  Kevin Faulk?  Mr. Third Down.  Deadly holding the ball, deadly pulling it out of the air - he scares rivals.  Now, Fred is what I would call a general purpose back.  And, he's known for crazy downhill speed; when he breaks loose, it ain't pretty.  However, during the Falcons matchup where he racked up 21 carries for 105 yards, we saw another side of Fred.  That is, the "put your shoulder down, turn a bit, and blast through the hole" Fred.  He created holes where none existed before.

My favorite side of Fred?  That's the "do you really want to tackle me?" Fred.  He blasts tacklers, explodes on them.  It's like they're standing in front of a big "Fred Cannon" when it goes off. 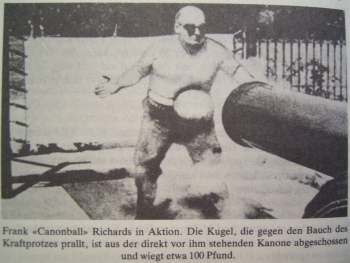 The Fred Cannon.  So, aside from his obvious talents as a running back, Fred is a true veteran presence.  That shoulder drop, blast through the line stuff is something our "young buck", Laurence Maroney, is sorely lacking.  Laurence dances, bouncing off the line, seeking a spot to run through.  Fred has great downfield vision and "creates" a hole to run through.  Sure, the O line does a bangup job of parting the 300 pounders, but ultimately Fred has to slice and dice his way through.  And the young guys take notice.

In my humble opinion, Fred is on this team to be a mentor, most likely for Laurence Maroney.  Taylor suffered unending criticism in his early years as he sustained an endless barrage of "Fragile Freddy" insults while he recovered from one injury after another.  Maroney is experiencing much the same.  Whether or not El Mo can develop this year into a Fred Jr. remains to be seen, but I think he's only got one year, THIS year, to figure it out.

So where does this leave our backfield?  As many of you have surmised in other comments, Law Firm will, most likely, play a bigger role.  Maroney and Green-Ellis will continue what they always do - general purpose running.  Next, Faulk will assume third down duties and whatever else he's asked to do.  Sammy will do general purpose and surprise 'em with a little option or screen from Tom Brady.