A tale of the tape: New England Patriots @ Denver Broncos

Share All sharing options for: A tale of the tape: New England Patriots @ Denver Broncos

We all know the story by now.  Belichick, spending about 3 seconds as head coach of the Jets, becomes HC of the New England Patriots and leads them to 4 Super Bowl trips, 3 of which end up with hardware.  Young football dude McD rises through the ranks and becomes OC of the Patriots.  After leading what some might consider his most successful season, given what he had to work with, he parts company on good terms and takes over for the ousted Mike Shanahan as Denver's new head coach.

Leading up to this Sunday's matchup, the 2 claim they haven't spoken to each other.  Eerily, they both said almost the same question when asked if they'd been in contact: "I've only been in contact with my staff.  We have a game to prepare for."  Sounds like the kid has pulled a few lines from his mentor's media playbook. 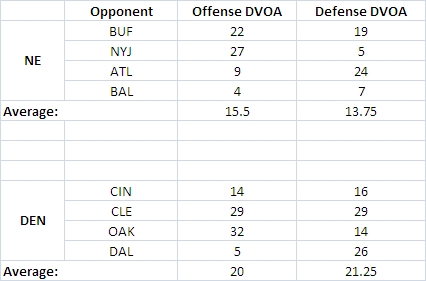 Utilizing Football Outsiders' DVOA analysis, it's clear the Patriots have played higher ranked teams on both offense and defense.  Now, I wouldn't be foolish enough to proclaim this a definitive analysis.  For example: this is the DVOA rankings AFTER 4 games.  A better analysis would adjust for the opponents DVOA at the time of the matchup.  Be that as it may, we'll just have to go with Denver having a weaker schedule for the first 4 matchups.

For Sunday's matchup, the rankings are: NE 7th on offense and 18th on defense while Denver is 11th on offense and 3rd on defense.  Interestingly enough, Football Outsiders has Denver's defense ranked higher than Baltimore's based on DVOA: 3 to Baltimore's 7.  That could indicate a tougher time for Tom Brady and crew.  Using NFL statistics, Denver is an impressive opponent, ranked in the top 5 for Overall Defense, Passing and Rushing Defense.  Offense is where things fall off a bit, only showing at #4 for Rushing.  The ONLY category where New England hits the top 5 is Passing at 5th.  Denver doesn't appear to have many weaknesses.

However, looking at some of the past matchups, one could safely say this Denver team was one lucky bobble away from a 3-1 record.  The same could be said about the Patriots, too.  The Bills' Leodis McKelvin should've kneed the ball in the endzone instead of running it out and ultimately having the ball stripped.  Luck is being prepared to take advantage of a situation and both teams have been there.

You can read what you want into statistics, but in my opinion, this game comes down to 2 people: Belichick and his former student McD.  Both know each other so well that they will be trying to outsmart the other.  Hoodie will try to lull McD into a fall sense of security with a few things he's seen, then switch it up a bit.  Maybe Josh, with his knowledge of Tom Brady's tendencies, he'll show him one thing and do another.  This is a chess match.  We know Belichick is a grand master but is the kid up to the challenge?

I think these 2 teams are so evenly matched it's very difficult to call.  When you look at the statistics, the Patriots have played tougher opponents, but there's that whole, "We're playing at Mile High" thing: we're 2-4 during Belichick's reign.  While I always view the Colts matchup as a premier game (the whole Brady vs. Manning thing), this matchup has to be right up there.

I think we're gonna see some football on Sunday.