Now that I own this blog, and all the souls of the people currently reading it (which kind of makes me sound like the Freddy Krueger of sports bloggers), I'll dump on you what I dump on my own readers every Thursday during the NFL season: My game previews. 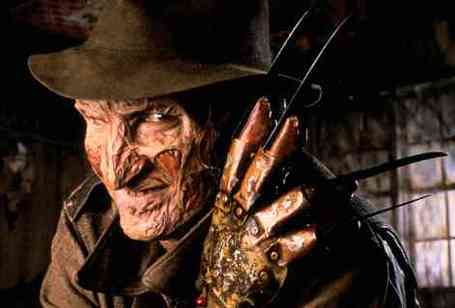 If you don't get the Freddy Krueger reference, just keep your mouth shut or you will make MaPatsFan and I feel very old.

For this preview, I am required to (ugh!) do it from the POV of a Patriots fan, which basically means I cannot insert snide comments about Bill Belichick's sleep-inducing press conferences, or state that players "suck" just because I don't like them. For me, this takes all the fun out of writing a preview. I mean, what good is a preview if I can't make YET ANOTHER joke about Spygate, the Pats choking in the Super Bowl, and the laugh-rot-comedy-musical-review that is a Bill Belichick's post-game handshakes, which for Belichick seem less about sports congeniality and more akin to getting water boarded in a tank of gasoline. 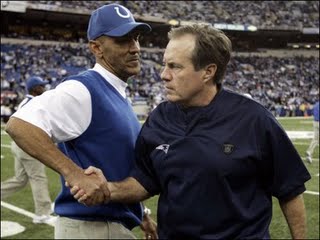 Someone is NOT enjoying this handshake

Nevertheless, I will saunter forth with this preview, which (both on paper and seemingly in practice) might pit the two best teams in the NFL against each other this Sunday.

While the surprising Denver Broncos and New Orleans Saints are getting much of the "WOW!" headlines, the bigger story is the play of the New England Patriots. Gone from last year's defense, which ranked #8 in scoring at 19 points per game, are Richard Seymour, Tedy Bruschi, Mike Vrabel, and Rodney Harrison. More so than Tom Brady, the foundation of three championships was built on defensive players, who always had a knack for coming up HUGE in big games (don't... think about... that damned Rhodes fumble...). This year, with all those players gone, with Adalius Thomas seemingly declining before our eyes, the Patriots sport the #2 scoring defense in the league, giving up 14 points per game.

They are second only to the Colts, who give up 13 points per game.

Again, Denver and New Orleans are getting the headlines for defense, but the real story (aka, the one more interesting to people who actually know football) is the play of the Pats and Colts defenses. No one expected these two teams to have such outstanding defenses in 2009. With Indy losing longtime head coach Tony Dungy to retirement and letting Ron Meeks go (rather unceremoniously, I might add), the feeling from many was Indy's defense would regress even further from the mess it was last season.

The Colts and the Pats continue to prove that excellent pass defense, coupled with smart pressure packages that maximize the risk of the opponent making a mistake, are the best practices to stopping NFL offenses.

So, for me, this game is actually less about the legendary quarterbacks (Peyton Manning and Tom Brady... perhaps you've heard of them) and more about the defenses for the Pats and Colts.

For Peyton Manning, players like Vrabel, Brushi, and Harrison used to give him fits. No defense bothered Peyton like the Patriots defenses from 2001-2004. Now, with those players gone, can new faces like Jerod Mayo and Brandon Meriweather provide equal frustration to "Perfect Peyton"? Currently, Peyton is well on his way to winning his fourth NFL MVP, a feat no player has ever done. A "bad" day for Peyton now is "only" throwing for 350 yards, completing 65% of his passes, and no turnovers.

If the Patriots want to have any hope of winning this game, they must attack and frustrate Peyton. They must confuse, disguise, and rattle him. That is, by no means, an easy feat. In fact, no team has really been able to "rattle" Peyton since, maybe, the 2004 Patriots in the playoffs.

For the Colts defense, they hired longtime Brady nemesis Larry Coyer as their defensive coordinator. Pats fans remember coyer as the "real" mastermind behind the Denver Broncos defense from 2002-2006. Coyer coached their defense during Denver's playoff win over the Pats in 2005, which saw Tom Brady throw an INT for a TD. From 2002-2004, Coyer was instrumental in keeping the "Holy Trinity" of the AFC intact (Patriots would beat the Colts, Broncos would beat the Patriots, Colts would beat the Broncos).

Now, Coyer is in Indy, and he has their defense playing as well as it has ever played. Dwight Freeney will own an NFL record if he sacks Brady this weekend, which would give him a sack in ten straight NFL games (going back to last year). Though Indy's secondary is beat up, losing longtime Patriots boogeymen Bob Sanders and Marlin Jackson for the season, the Colts do sport some impressive safeties with Antoine Bethea and Melvin Bullitt. Colts rookie corner Jerraud Powers is a legit Rookie of the Year candidate, and Jacob Lacey (another rookie) has looked impressive as well. Despite their youth, this group has indeed been tested against passing attack from the Arizona Cardinals and Houston Texans. They have passed with flying colors.

Like all great Patriots v. Colts games, this one will likely go down to the wire. And while the QBs will likely get all the jeers and glory, it will be the defenses of these two NFL giants that will decide the game. While neither team runs the ball well (numbers-wise), both defense want to opponents' QB to throw more than they want to. The pass defenses for both clubs are their strengths. Look for both to find ways to pressure the QBs and force them into short-field mistakes.

Likely, the team with the fewest mistakes will win.