In the history of the NFL draft, only three offensive lineman have been picked first overall:

In 1968, the Minnesotta Vikings made young Ron Yary the first pick.  Coming from Chicago by way of Cerritos Junior College and USC, Yary anchored the right side of the Vikings' line for 14 years.  Over a 15 year NFL career, Yary missed only two games due to injury.  He was a seven-time pro-bowl selectee and would be enshrined in Canton in 2001.

In 1997, Orlando Pace was taken in the first slot by the St. Louis Rams.  Pace came roaring out of Ohio State as the hands-down best offensive lineman in that year's draft and, by some writerly lights, one of the best young tackles in a generation.  Starting 13 games in his rookie year, Pace is now under a 3-year agreement with the Bears in this, his twelfth season.  Like Yary, Pace has been selected to seven Pro Bowls and, like Yary, will one day be given a very ugly yellow jacket to go with a bronze bust of his head and a place in the Hall of Fame.

Finally, in 2008 the Miami Dolphins made Jake Long from the University of Michigan the third offensive lineman chosen first overall.  They also made him the highest paid offensive lineman in the game, with a five year, $57.75 million contract, $30 million guaranteed.  He started immediately, helping to lead a resurgent Miami to an 11-5 record and the AFC East title.  In his first year, he started every game and played in the Pro Bowl as an alternate selection.

Long's selection was the first big move by the Sparano-Parcells partnership, and it represented a commitment to youth that paid immediate dividends.

In all, the Dolphins have 24 players on their roster with two years or fewer in the NFL.  And they play:

In 2008 the Young Fins rode the surprising introduction of the so-called "Wildcat" to media acclaim though, as detailed by Cold, Hard Football Facts, it was pinpoint passing by underrated Chad Pennington that made it all hum.  With a season-ending injury to Pennington (brittle hardly begins to cover it) the 2009 Wildcat has seemingly lost much of its bite.  Miami stumbled out of the gate, dropping its first three in a row before beating hapless Buffalo and scoring two wins over the fraudulent New York Rex (thanks, gents).

These wobbles are perhaps to be expected from a young club with a young new leader, as it tries to sort its identity in a competitive division with inbred franchises that all hate each other.  To be fair, the Dolphins have lost to some very respectable teams.  The Falcons, the Colts and the Saints are not to be sniffed at.  All three of those teams were pressed by the feisty Phish to their respective limits.

Anyone watching the tilt with the Saints will have been impressed by an opportunistic Miami defense and a spirited and resilient offensive unit.  The "O" was at its best when Jake Long and company were paving roads with golden helmets and fleur-de-lis. Wildcat or pussycat, Miami's run game is legit.  They average 4.5 yards per carry (5.4 when running the old single wing) and have racked up enough running yards to rank 4th overall.  (New England's run defense is, shall we say, a bit porous at 14th league-wide.)

The Miami team that pressed New Orleans ripped into the Jets (in an odd scheduling arrangement, only two weeks after their first meeting) with special teams success, again led by a youngster -- this time Ted Ginn.  Given the Patriots' uneven performance in coverage, it was a sobering sight.  (Our coverage unit ranks 20th in average yards per opponent's return.)

Keeping with the youth movement in South Beach, we'd be remiss not to tip the tri-corner in the direction of Henne.  He isn't lighting up the highlight reel by any stretch.  But as a young guy who wasn't slated to start until 2010 at the earliest, he is settling into the role.  His biggest trouble on the field has been a sustained case of the dropsies in the receiving corps. (Besides, Henne's all they've got before Pat White.  White's a project for now, but don't sleep on him.  He's got a rifle arm and in spite of all the yak about his potential as a runner, he's a more complete passer than people give him credit for.)

There is plenty of promise in the Sunshine state.  Luckily for us, "promise" is a word which, like "potential," better describes what is missing than what is there.  This young team is mistake-prone.  Where it isn't young, it sadly lacks discipline.  Joey Porter and Channing Crowder continue to lead the league in the "losing your cool and costing your team 15 yards at the worst possible time" category.

Perhaps more unsettling to the Phins Phaithful is the questionable play-calling and game management of Dan Henning, OC and playcaller for Tony Sparano's men.  When then-65 year old Henning was fired by the Panthers following the 2006 - 2007 season, he was heavily criticized by fans and media for being overly conservative in his play-calling.  In what might be considered a reaction against that label, Henning installed the single-wing in Miami.  Ironically, it could be argued that this was the ultimate in conservatism, as the single-wing had its hey-day when Henning was in high school.  Nevertheless, the catPhish have made for some exciting times and entertaining football.  For a year at least it was also associated with winning football as Miami won the east.

This year, however, the Wildcat doesn't surprise anyone.  It's still effective -- yielding a respectable 5.4 yards per carry -- but the shine is off the apple and no longer dazzling the eyes of the defense.  With Pennington sidelined, the pinpoint passing of last year's run is largely gone, showing the difference between a leading game manager (Pennington) and a quarterback for whom the game must be managed (Henne).

Yet confusingly, Henning has kept the pattern fresh -- even when some regularity might be of help.  Miami was giving New Orleans all the Ronnie Brown and Ricky Williams it could handle and more.  But as the second half dawned, Henning turned to his young gun, bizarrely engaging Pro-Bowler Brees in a shootout with a first year quarterback.  He was in a back-alley brawl, bashing a flashy foe with two big bats, but he picked up a BB gun and dared Drew to draw: Dumb, Dan.  (Needless to say, I gave him a "D.")

Nevertheless, there can be no denying that the Dolphins are stockpiling the young talent.  Jake Long should be the poster-child for that movement, a brilliant draft choice and a very solid cornerstone for the franchise's future.  As Henne develops, one thing he won't have to worry about is what's going on behind him.  That's peace of mind worth paying for.  The Miami youth movement will certainly pay dividends as the young shoots mature.  But without the steady hand of old head Pennington, 2009 isn't looking like 2008. 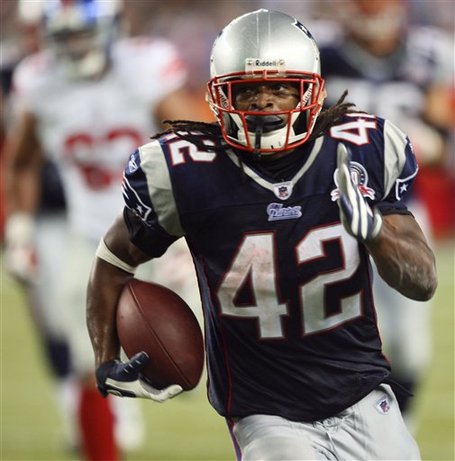 Youth will be served, but not this Sunday:  Patriots 28, Dolphins 13.