Sunday Fish Fry, Part I: This Chowda not "Dolphin Safe," but pulling in the nets no easy task

Share All sharing options for: Sunday Fish Fry, Part I: This Chowda not "Dolphin Safe," but pulling in the nets no easy task

Well friends, we're in it now.  With the bye week in our rear-view, the true meat of the schedule is here.  In what promises to be an absolutely brutal five week stretch, New England will face, in order: Dolphins, Colts, Jets, Saints and Dolphins.  If that doesn't look like a sphincter-clenching run through the briar patch of the AFC, then you must know something about football that I don't.  Or you're clueless and at this point I'm prepared to go with that.  Other than the Steelers, the Pats will have played the class of the Conference by the time all is said and done, plus the best the NFC has to offer.  Right now, we're 1-1 against better teams, with a squeaker over Baltimore and an overtime heart-breaker at Mile High (I hate playing in Denver).

High School, college or pro, the best teams discipline themselves to focus on only the next game.  It is for the fan to agonize and prognosticate over what the future holds.  But that's all part of the fun and the media are more than happy to help us along.  Below the fold, I've swiped wholesale Tim Graham's first half/second half graph, analyzing the relative strength of schedules for the AFC East.  Under the heading of "it figures," the 'Phins have the easiest road the playoffs.  The hardest row to hoe belongs to your New England Patriots.

Take a gander, but this week we face the first game of our annual series against Miami.  Since that's what's on the menu, let's get out our tartar sauce and lobster bibs and look at how to catch some Phish.  Part I is a look at the Dolphins on offense and some of the challenges they pose.

(Note: Part I may also be the only part I get to, as I need to be on the road this weekend.  But if it isn't, I'll be taking a look at the Miami defense in Part II.)

The two-headed monster:  Ronnie Brown and Ricky Williams.  Coming out of Auburn, Ronnie Brown weighs 230 pounds.  He's not slow, he doesn't shy away from contact and he's smart with the football.  That's a good thing, because in the catPhish offense, he's the guy that makes ballhandling decisions.  He'll throw, too.  He's only 1 of 4 this year, but that one went for over 20 yards.

Unlike a team might do if it were running the 'cat as a gimmick, Miami will frequently pull quarterback Henne off the field altogether, rather than splitting him out wide.  They do this for a couple of reasons: first, it discourages the corner blitz -- a quick way to stuff up the 'cat if you're asking a QB to get in the way.  Second, because they trust Brown to throw the occasional pass, defenses can't load up against the run.  They have to honor the pass at least a little bit.

That puts Brown on the field with Ricky Williams along with a full compliment of blockers.

The attraction of the single wing for most amateur teams that run it is the misdirection piece.  It lets you move the ball effectively against bigger or faster defenses by using their superior ability against them.  You can line up with a smaller line, or slower backs, and still grind out yards by getting defenders to chase players instead of staying home and playing their assignments.  That's one way it works.

The other way it works is by taking that misdirection piece and complimenting it by smashing you in the mouth at the same time.  That's what Miami does.  As Vince Wilfork said, "They're not trying to trick you.  They're going to try to run the ball."  Their two-fisted, body-blow approach to running the ball is balanced with the much-maligned Ricky Williams.

I will say straight out: I am a fan of Ricky's.  There are two reasons for this:  First, when it came about that Ricky likes the reefer, the cry that went up condemning him was so loud and so strident that you'd have thought that he beat his girlfriend.  Or obstructed a murder investigation.  Or broke a teammate's jaw.  Except all that he did was a) smoke weed and b) admit that maybe football isn't the most important thing in the world.  In fact, it might not even be the most important thing in Ricky's world.  Second, Ricky fought with and overcame social anxiety disorder, in public.  So anything he does in the way of paying back the 'Phins on his contract, rehabilitating his image, or being a success, I'm willing to celebrate. 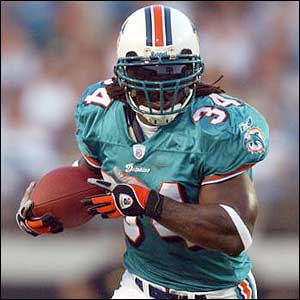 Plus, he brings the wood.  Ricky is averaging 5.4 yards per carry right now, more than he ever has.  He's also catching the ball, with 15 receptions for an average of 12.3 yards per catch.  As Belichick said, "I think either one of those backs could be the back for anybody."  The Jets, the Saints and the 'Phins are the only teams that run more than they throw.  They aren't fooling around.

The obvious implication is that you have to stop the run.  At times, the Jets and the Saints had eight men in the box to do that.  Can the Patriots follow suit, and will that work?

Phlying Phish:  We all know Chad Henne is young.  He's starting at least a year ahead of schedule, and he's struggling a little bit.  But one thing that he has which Chad Pennington does not is a cannon.  Henne can air it out if he gets the chance.  We know our pass rush has been anemic, and we know that Miami has a good offensive line.  Who is catching Henne's passes?

The Patriots match up well, in my opinion, against the Dolphins pass-catchers.  The Dolphins' two leading receivers are Davone Bess and Greg Camarillo, with Ted Ginn Jr. in the number three slot.  Ginn's troubles with route running and catching (you know, the two things receivers do) have been mentioned before.  He's probably the most explosive return man in the East, though.  Bess has had similar trouble of late, with two fumbles and a dropped ball in the last two games.  Still, if Henne has a go-to wideout, it's probably Bess.

Don't sleep on Brian Hartline.  He's only got 10 catches, but they've gone for 157 yards -- highest average on the team.  He's the kind of gut-punch white slot receiver that always seems to kill us (see, Stokley, Brandon).

Patriot Pride:  Defense used to be the name of the game in New England, forget what you heard from the press.  During the second Super Bowl Run in 2003, New England enjoyed one of the finest defenses to play the modern game.  That unit grew old as the offense matured and later days have seen lots of fireworks, but no championships.  I believe the defensive side of the ball is on the way back.

There has been an enduring impression, created over the past few years, that the Patriots defensive backfield is weak.  That is no longer true.  I expect to see Brandon McGowan playing close to the line -- perhaps getting a "shadow Ricky" assignment -- in his key run support role.  The Patriots will rotate corners through according to matchups, down and distance, and who seems to have the hot hand.  I'm going to predict that UConn's own Darius Butler pulls down another pick and that Brandon Meriweather does at least one thing that blows your mind (in a good way).

That leaves the front of the house, and what is still something of a soft underbelly.  I hope that someone shows that to the fellas, 'cause they're going to have to man up this week.  If you grew up watching the Dolphins of Dan Marino, as I did, you'll remember a team with a questionable running attack and an erratic defense.  Well, this is not your father's Miami Dolphins.  These guys aren't going to carry the fight with the pass -- they want to run it down your throat.

The Patriots have been good against the run, but only when they're concentrating.  The front 7 have yet to put together a complete game in that way, and every team we've played has seemingly had at least one drive where they ran through, over and around our guys.  We can't have that this week, which makes it an even tougher time to lose Jarvis Green.  Pryor, Wright and probably Brace are going to have to step up and match Wilfork and Warren.

I'm not worried about Mayo, but I am worried a bit about our outside linebackers.  There isn't one among the five of them (Banta-Cain, Burgess, Ninkovich, Thomas and Woods) who hasn't had some trouble setting the edge this season.  I think Ninkovich and Banta-Cain have been the most consistent in that regard, but maybe this is finally Thomas's week to show us the real deal.  I hope so, because you don't want to see Ricky Williams get into the flat.

Special Note:  Tyler Thigpen can throw and run, and Pat White can run and throw.  If you're looking for the Dolphins to launch a surprise on the league by slashing the Pats like they did last year, I'd look for more passing out of the catPhish.  White could be dangerous on some of Williams' sweep-style plays, particularly if he pulls up and chucks it. Vice versa for Thigpen out of Brown's customary slot.  He's not averse to running outside the tackle.

Overall, I think this game will come down to our safeties.  The Dolphins are going to break off their share of runs.  The key will be to limit big plays and that goes to discipline in the middle of the secondary.  Run-force is a critical role for the secondary as a whole, but a misdirection running attack is a great opening act for play-action passing.  If Meriweather and McGowan can keep everybody on the same page while making their own correct reads, the Dolphins will eventually screw up.  You can't win it all with a run game -- since the invention of the forward pass, no one has.  Dan Henning has shown that he won't stick with it anyway, even if it's working.  If our safeties have solid outings, we'll be able to keep the score down.

Then it will be up to our offense to hang up some points.

(For the record, I hadn't yet read Bruschi's Breakdown when I wrote this up.  In it, he tips safety play as a key.)