Share All sharing options for: The farthest Patriots fan? 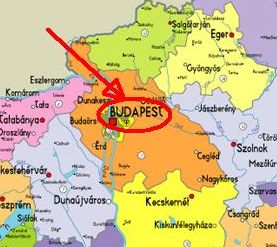 That's Budapest, Hungary folks - 4,201 miles from the center of the universe, Foxboro, MA.  In case you're wondering, it's in the Central European Time Zone or GMT +1 for you time zone geeks.  A Patriots game for bartHML is 7:00 PM, 10:15 PM, or 2:00 AM CET!!!  That never seemed to stop him.  He was on every game thread, chatting about plays and interacting with all of us.  A true fan.

I was very curious how a guy from Budapest became a fan of American Football and, more specifically, a fan of our New England Patriots.  I asked bartHML to do a Q&A and he was more than happy to (Thanks Andras!!).

Tell us a little bit about yourself.  What part of Hungary did you grow up in?  What do you do for work?

My name is Andras Mundy. I'm a few weeks away from being 20. I was born and raised in the capital city, Budapest. Currently I'm a second year university student, majoring in American studies.

Tell us about Hungary:  foods it's famous for, most played/watched sports.

We had some misfortunes over the last few centuries, and we were on the wrong side in both world wars. Our politics and economy are not so good, and that's obvious if you compare life standards with the surrounding countries. But I don't think that's interesting for you :) Goulash, porkolt, and pancakes are famous Hungarian dishes. We used to be famous for our national soccer team, the Golden Team, but that is long gone. We are pretty good at water polo (beat You guys in the Olympics finals for the three-peat :) ), kayak-canoe, and we have some good swimmers (Phelps vs. Laszlo Cseh) We are Top 6-8 in the world in handball, and sometimes we have success in various individual sports. Plus there are numerous thermal springs and spas in the country.

Growing up, what was the sport or sports most played by you and your friends?

We played soccer almost all the time, and sometimes basketball. Near the end of high school, we tried some American football, but soccer remained our major sport.

How did you become a fan of the NFL?

The Hungarian Sports channel broadcasted the Pats-Panthers Super Bowl. I knew almost nothing about American football before that, and at first I didn't really want to watch that game either. Fortunately, we recorded it, so I watched it later, became a fan, and had a full offseason to become familiar with the sport. Since the following season, two games per week are being broadcasted. The time difference (ET+6 hours) sometimes makes watching the games hard, but I try to watch as many as possible :)

Most people in the US are fans of a team because of their geographic closeness to a particular club.  Out of 32 NFL teams, why did you choose the Patriots?

I have a complex answer for this question. First, as I've already mentioned, a Pats game was the first that I was able to watch. Second, my brother rooted for the Panthers, so I "had" to pick the Pats... :) And third, I have to admit that it also helped that we won that game.

Who is your favorite Patriot and why?

I couldn't name one single player as my favorite. I like Brady because he is a true leader. Maroney because I have great success with him in my online Madden league :) I like Welker because once I translated an ESPN article about him and he has an unbelievable story. Tedy and Rodney, leaders on the other side of the field.

Also, you can't forget Vinatieri's kick through the blizzard(although I'm happy for every FG he misses in Colts uniform), and Ty Law's "special relationship" with Manning... :)

Is American Football popular in Hungary?  If you walked into a bar or pub, would it be playing on the television?

American football was almost unknown for most of the people here until that first broadcasted Super Bowl. Since then, however, it has become a very popular sport. We have 26 teams playing in three different divisions according to strength. There are also some junior teams. There are two, well-managed websites dealing with the NFL and NCAA. Also, The Hungarian Patriots Fan Club is registered on patriots.com, and there is a website dedicated to the Pats where I'm a co-editor. We mainly collect and translate the news from around the web, especially from Mike Reiss, and sometimes we translate or write some longer articles. As for pubs, there are some sport bars/pubs where you can watch NFL games with original broadcasts.

A big Thank You to Andras for chatting with us about his country and his love of American Football.  Andras writes for the Hungarian Patriots Fan Club at www.pats.hu, an official Fan Club of the New England Patriots.  Andras translates news from around the web, especially our very own Boston Globe sportswriter, Mike Reiss.  You better brush up on your Hungarian, though. :-)