Let's see, what can I rant about today?  The whole Julius Peppers thing is a little ludicrous if you ask me.  First, nfl.com is reporting ther 4-3 DE is going to the Patriots as a 3-4 OLB:

The trade that sent Matt Cassel and Mike Vrabel to the Kansas City Chiefs appears to be only the first phase of some major wheeling and dealing by the New England Patriots this offseason.

The second phase, NFL sources say, is likely to involve a trade that would send Carolina Panthers defensive end Julius Peppers to the Patriots in exchange for the second-round pick (34th overall) they received from the Chiefs on Feb. 28.

According to league sources, the Patriots and Panthers are hoping to complete the deal at some point between the March 22-25 NFL owners meetings and the start of the draft on April 25.

Maybe Vic Carucci didn't get his story right because Adam Schefter said just the opposite:

Schefter said Peppers "will not be a Patriot" and that he was 99.9-percent sure that the deal would not happen. Pretty definitive stuff, although Monday’s report on NFL.com was also pretty definitive saying the deal was nearing completion. I guess it depends whose sources you trust more. Although Schefter isn’t wrong too often.

Who you believe is a matter of opinion and your leanings towards your favorite journalist, but the thing that drives me nuts is that both these guys work for the same organization.  I guess, just like any other business, they're subject to the left hand not knowing what the right is doing.  It seems like Carucci fell to the "I need to publish this news first" syndrome and Schefter is left to clean it up.  Whatever the case may be, this stuff drives me nuts because we end up quoting it, just like a gazillion other blogs, and it mushrooms out of control.

Tom Terrific was back in Foxboro for the start of voluntary workouts.  Always a good sign to see the leader of the team in the locker room, he chatted it up with new receiver Greg Lewis:

"I met Tom today at a workout and in the locker room," said Lewis, who recently was acquired from the Eagles. "He came up to me and welcomed me to the team. He seemed like a great guy. I’ve seen him on film do great things. I’m just looking forward to (getting to work)."

In a final interesting tidbit, Jets are reportedly keeping a close eye on Jay Cutler.  Apparently if he can't find his binky in Denver and McD won't hug him and tell him what a good boy he is, the boys in green are ready to roll out the red carpet:

Cutler told the Broncos through his agent, Bus Cook, who represents the retired Favre, that he wants to be traded, the team confirmed Monday. The Broncos have said they have no plans to trade him, with the rookie coach McDaniels hoping to salvage the relationship by meeting again with Cutler. But the situation appears to be deteriorating, as the strong-armed passer, upset that his name was floated last month in trade talks, seems determined to strong-arm his way to another team.

Oh, one more thing.  I leave you with a pretty funny picture about the whole Peppers saga: 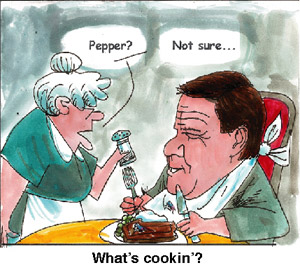