Share All sharing options for: Ten Patriots for 2009: No. 2, LB Adalius Thomas

You've probably heard it all offseason. "The Patriots need a better pass rush." There are questions as to who will be up to the task of replacing Mike Vrabel after he was traded to the Kansas City Chiefs along with Matt Cassel for a second round pick. Along with our secondary, this is probably the biggest perceived weakness for our New England Patriots. They made no moves in the draft to pick up an outside linebacker, and while they pursued Jason Taylor and Derrick Burgess, we've seen no action in that regard ever since (Taylor, as we all know, chose to return to the Miami Dolphins). So who steps up to get after the quarterback?

Okay, so he's not directly replacing the spot Mike Vrabel occupied this season. I know that. Vrabel's old spot will likely go to Pierre Woods or one of the other OLB candidates competing with him. However, if it's getting after the quarterback we're talking about, why is everyone ignoring Adalius Thomas?

He was injured after nine games last year (technically ten, but his injury came in the beginning of that Buffalo game). He was one of many players to land on the Injured Reserve list, so was it any wonder that our pass rush was lacking? After playing mostly inside linebacker in 2007, he was a force to be reckoned with in "The game that shall not be mentioned" on the outside, and he had gotten five sacks last year up until he was injured. Those five sacks came in a limited rushing role because he was dropping into coverage a lot (most likely because of our secondary problems and to help Mayo/Guyton as they progressed), which leads me to my next point.

Thomas is our most versatile player on defense. He can play inside and outside linebacker. He can set the edge, rush the passer, drop into coverage, all of it. After Tom Brady, I would argue that he was the next most important player we lost to injury last year. When healthy, the guy hardly ever left the field. With Adalius Thomas back, and Mayo and Guyton hopefully much improved playing in coverage, the pass rush should see improvement. Whoever plays SOLB in place of Vrabel does not need to be a pass-rushing demon, just solid and consistent. As Bill Belichick would say, "just do your job."

And if you need a friendly reminder for what Thomas is capable of, just ask Brett Favre and Leon Washington. 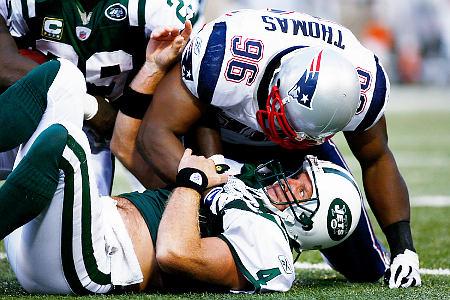