Vince Wilfork can be many things.  To opposing offensive linemen, he's a nightmare; at 325 pounds and with five years under his belt, he's prime, Grade A nose tackle material.  To rival fans, he's a cheapshot artist of the highest order; just ask any Bills fan and they'll tell ya.

But, to me, he's one classy guy.  In the midst of a protracted contract negotiation, Vince has kept his wits about him and is focused on the task at hand, namely football:

"While I’m here, I’m going to pay my dues. I signed a six-year deal and I’m going to play my six years. Some people chose a different route. That’s not me.

"I’m doing what I can do to better myself. Whether I’m here or not here, I’m playing football. By me sitting out, what would that prove? Don’t prove nothing to me."

This is EXACTLY the kind of thing I like hearing.  Nothing ticks me off more than some prima donna wanting to negotiate his contract, and then pulling whiney baby stunts to make his point.  Good for you, you played well.  THATS...YOUR...JOB!!  If you played poorly, is it ok for the organization to renegotiate your contract down?  Wait, I'll give you time to answer...BZZZZZZZZZTTTTTTTT!!!  I thought not.

Instead, Vince does the classy thing and does his job, honoring the contract he signed, even though he's significantly underpaid:

Yet Wilfork’s $2.2 million salary is $3.25 million below the average of the top 10 defensive tackles in the league and $3.858 million below the top five. Pittsburgh Steelers nose tackle Casey Hampton will earn $5.177 million this year for not playing as well, or probably as often, as Wilfork, who has missed only three games in five years and none in the last two.

Now, part of me wants to call up Kraft and rip him a new one, but I've given up on that, especially after the restraining order.  Seriously, what the heck is he thinking:

Why the Patriots continue to low ball (or these days no ball, according to people familiar with the negotiations) Wilfork, only they understand, but they made the same mistake with Curtis Martin, Asante Samuel [stats], Adam Vinatieri, Deion Branch and nearly with Richard Seymour [stats], who, like Branch, stayed home until he was fairly compensated. Now they are perilously close to walking the same road again.

Again, Vince doesn't want to sit; he's got too much class for that.  You know, a guy who actually thinks about his teammates vs. himself:

On the other side of the coin, bidness is bidness.  Part of the reason the Patriots are more successful than any other franchise in the past decade is that mindset.  Don't like it?  There's the door.  I'm sure some other team would be happy to pay you.  Before you go, take a walk through "The Hall at Patriot Place" and pay careful attention to this picture: 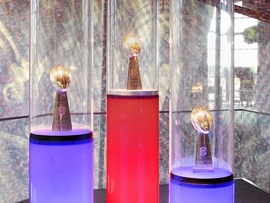 via www.patriot-place.com
Good luck, sayonara.  Don't get me wrong; I think Wilfork is dealing in good faith.  The LEAST the organization could do is to throw him a bone, start a dialogue.  But that doesn't appear to be happening.  Which leads me to my next question: Do you think the organization is correct in their stance?  Should they stick with the Patriot Way no matter who it is, or should they bend a little for Vince?
Life would be weird without the big man.  I'm not sure I want to think about it.