For what seems like an eternity, I've been whining about the lack of a pass rushing outside linebacker.  Now, I'm not saying projected starters Adalius Thomas and Pierre Woods can't do the job.  Far from it.  They're extremely good in coverage and sealing up the edges.  But neither of them were "experts" at rushing the passer.  Remember Mike Vrabel in 2007?  He was an animal.  Opposing QB's were always worried because he was in the backfield.  In my mind, teams with a dedicated, single-minded pass rusher make problems for offensive coordinators.  The moment you have to scheme against one guy, the pass rusher, you're in trouble.  That's what good pass rushers do: they create problems for the opposition.

Enter Derrick Burgess.  The idea of Burgess in Foxboro had been floated around when free agency time hit.  Nothing materialized because, in my opinion, Burgess didn't have any leverage to force a trade, or maybe it just takes that long; who knows.  Now that training camp is in full swing and he wasn't showing up, Raiders Head Coach, Tom Cable, decided to cut him loose.  Now, I'm not a fan of players essentially violating the terms of contracts they sign simply because they're unhappy with their situation.  If they're getting treated unfairly, that's one thing.  But, if they simply don't like where they are or aren't getting paid what they think they're worth, too bad.  However, in Burgess's case, playing for the Raiders under owner Al Davis (aka: Skeletor), I'm almost willing to give him a pass: 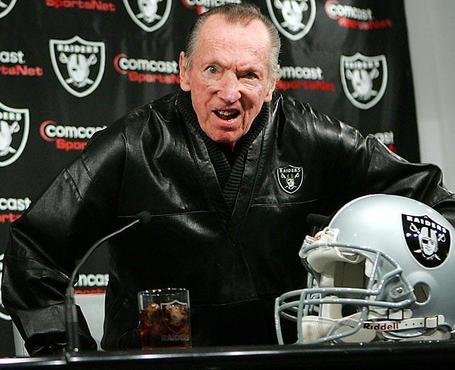 Al Davis is a senile, old fool and should've been run out of town a long time ago.  He's ground that franchise into the dirt.  At any rate, this isn't about Skeletor, this is about Burgess joining the Patriots.  Granted, he was a DE on the Raiders, but at 6-2 260 lbs, he's too small to play defensive end in a 3-4 alignment.  He's much better suited to OLB duties which is where he'll muster up.

You can bet he'll be working hard to make an impact.  The Steelers and Patriots sit relatively equal in terms of potential AFC dominance with the Colts in second or third, depending on how you look at it.  Pitt is in good defensive shape, so why not make a move for a winning organization, one that will give a player the best chances of retiring with a ring?  You know that was going through Burgess's mind.

Welcome aboard, Derrick.  We're glad to have you.  What do you think, folks?  Does he supplant either Woods or Thomas or is he brought in during obvious passing situations to rush the passer?

Props to BabeParilli for his FanPost on the subject.  You called it, Babe.