Playing with the Defense: the New England Patriots experiment with a 4-3

Share All sharing options for: Playing with the Defense: the New England Patriots experiment with a 4-3

Ever since I can recall, the New England Patriots have played a 3-4 defensive alignment.  Or, more accurately, they have been PEGGED as a 3-4 team.  Any observant fan will notice some really wacky combinations, especially when employing a nickel or dime package.

In the 2009 preseason, Belichick appears to be messing with a 4-3 alignment.  We saw a great deal of it in the first game against the Eagles and we postulated on this blog, "Wouldn't it be cool if Ron Brace was lining up next to Vince Wilfork?"  Well yeah, it IS cool. 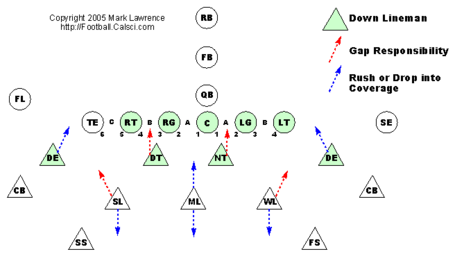 To get all geeky on y'all, a 4-3 alignment is incredibly good at stuffing the run.  It's simple: 4 down linemen to plug up the gaps on rushing plays.  3-4 DE's are primarily used to plug up holes or gaps.  4-3 DE's are fast, athletic, and big - think Julius Peppers.  They are pass rushers first.  The problem?  They are VERY expensive as we saw in the offseason when Peppers was looking for an OLB job in a 3-4 (he must be PO'd we're messing with a 4-3 now, dontcha think?).

The question I'm not clear on is why, exactly, is Belichick messing with his defensive alignment.  Is he unhappy with the 3-4?  Does his current personnel grouping fit better in a 4-3 alignment?  Has no one stepped up to take Bruschi's ILB spot?

It seems Jerod Mayo has emerged as a defensive leader and has been wearing the green dot indicating a radio.  It makes sense for an inside (now middle) linebacker to take that role.  But what is it about the OLB's and DE's that's got Belichick toying with that 4-3?  One theory I have is a 4-3 is excellent at generating backfield pressure; that's probably its greatest strength.  It's possible he thinks his current crop of DE's or hybrid DE/OLB players are better suited for this alignment.  Or he may be trying to fool everyone into thinking he's going in that direction.