A Closer Look at the 2010 Patriots Defense (Halfway Edition)

Share All sharing options for: A Closer Look at the 2010 Patriots Defense (Halfway Edition)

This season I've dedicated myself to focusing on the defensive personnel and strategy that the Patriots are using. I've kept track of formations. I've charted snap percentages. And I've enjoyed every minute of it.

It has been an education and I'm happy to share some attempted insight at just what the Patriots have tried to do on defense that has left them with a 6-2 record, yet a poorly ranked defense.

I bust out the defensive snap percentage charts and provide a break down of the three levels of the Belichick 2.0 Pats Defense after the jump...

If nothing else this season I've discovered why Bill Belichick craves versatility with his players, especially along the defensive line. While the Pats have yet to use a 4-3 front, they've used a number of players in different spots.

Let us begin with an area that huge question marks coming into this season before losing Ty Warren.

In the 3-4 base the Patriots have used a number of different combinations, and despite getting run over by Peyton Hillis, this has been a surprisingly good set of run stoppers. As you can see from the chart below it's been a pretty healthy rotation with Vince Wilfork being the stallwart. 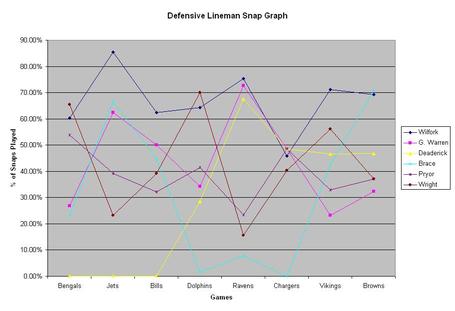 You'll notice a of peaks and valleys, which seems like a good way to keep everyone fresh. Just because a guy doesn't dress one week doesn't mean he won't play 70% of the snaps the next.

Pryor and Wright are a little better at pass rush, while Gerard Warren was used a lot early on, but has seen somewhat of a reduction as the young run stoppers have come on.

Clearly Brandon Deaderick was impressing in practice as he was brought in week four against the Dolphins and hasn't played less than 45% of the snaps in any game.

Ron Brace has been really up and down, hard to know for sure what that's a reflection of. He had a three game low before shooting back up to a defensive line-high of 71% of the snaps.

Gone are the days of Warren-Wilfork-Seymour straight up every time they go 3-4. Now you never know what you're going to get. Wilfork will placed wherever they want to to take away the running game. Then the other spots are manned based on match-up and freshness.

Let's start with with the inside linebackers. Jerod Mayo never leaves the field and Brandon Spikes will be next to him whenever it's a running down. Gary Guyton comes on in for some, but not all, passing situations, and usually he's blitzing or covering the tight end. Dane Fletcher is a part of one 3-3-5 nickel package where his responsibility is to spy the running back.

At outside linebacker we're seeing Jermaine Cunningham and Rob Ninkovich as the starters in the 3-4, and they're primarily there to stop the run. Cunningham started as a DPR but is now primarily only playing the base defense.

Tully Banta-Cain rotates in with Cunningham and Ninkovich but they try to keep him a little fresher for pass rushing. 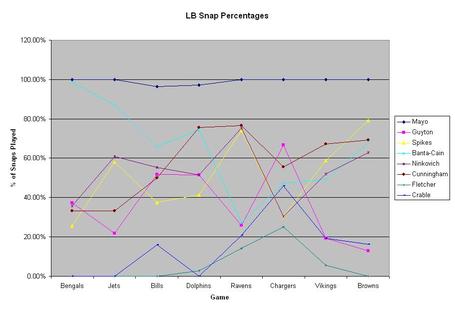 Shawn Crable is used only as a designated pass rusher and he really needs to start producing.

Don't underestimate the effect of getting Patrick Chung back will have on this defense. Chung was second on the team in tackles before going out, causing the team to rely on the solid but unspectacular James Sanders. Brandon Meriweather started the season in the doghouse but has worked himself back up to an every down player.

Sanders will continue to rotate in even after Chung comes back. The real question is when we'll see Jarrad Page back. His playing time was just starting to rise (at the expense of Meriweather and Sanders) when he was hurt against the Ravens. 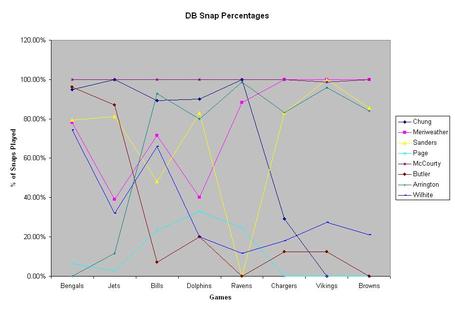 Devin McCourty and Kyle Arrington have been the go-to guys since Darius Butler fell off the map after two poor games to start the season. Jonathan Wilhite has been better this year, having his best game against the Browns, but still has been inconsistent and taken costly penalties (Vikings Illegal Contact in End Zone).

What's most interesting to me would've been if Leigh Bodden had not gotten hurt. Looks like there's a good chance Butler would've been riding the pine then too because clearly Wilhite is still at nickelback over him.

There are a lot of young players getting a lot of experience against a lot of good teams this year. The fact that the Patriots have gotten off to a 6-2 start has to be a surprise to everyone. Especially if you look at how they rank statistically.

But as Bill Belichick says, "stats are for losers", and right now the Patriots have been winning. But it's hard not to start drooling while thinking about 2011 when the Pats will return every starter, add Bodden and Warren back into the equation, along with whatever draft picks they add in 2011.

That makes me feel warm and fuzzy no matter what happens the rest of the way. Let's just hope for continues improvement, especially on third down. The rest will take care of itself.