Share All sharing options for: Boston Herald writer Ron Borges thinks on another level of existence 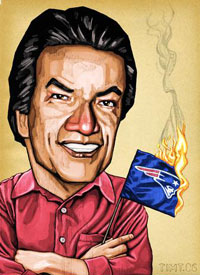 It's pretty obvious that everyone thinks Ron Borges is a over-negative schmuck who cannot find anything good to say about an organization many refer to as "best of the decade." I disagree. Maybe, just maybe Ron is thinking on another plane of existence, channeling energies so vast, so powerful that simple folk like us cannot begin to comprehend.

I mean, how else can you explain his recent article for the Bostion Herald that compares former-Patriots and current Seahawks coach Pete Carroll to guitar legend Pete Townsend?

I mean, clearly, Ron is elevated mentally on some other-worldly dimensional stratosphere where the normal notions of logic, rationale, and intelligence are dismissed and discarded like a college girl in a men's bathroom stall with Ben Roethlisberger.

Perhaps Ron can also see into alternative futures and parallel dimensions while he meditates prior to writing his articles. This might explain why he wrote an article informing readers they should not expect the NFL owners to change the rules for overtime on the very day that the owners voted 28-4 to change the rules for overtime. Maybe it was some weird, multiverse-like, parallel earth Ron was gazing in on as he consulted the magic crystal ball he bought off Amazon for $12.95.

To Ron's credit, when he wrote his follow-up article explaining why his prediction was colossally wrong, he did the right thing by blaming the whole thing on Barack Obama and Nancy Pelosi. Obviously, a heightened individual like Ron Borges knows what to do when he looks like a fool in the eyes of millions of Herald readers: Make a witty, seemingly unintelligible comparison between the vote-counting in congress for healthcare reform and the NFL changing its rules in overtime for the 2010 playoffs.

Next thing we'll tell us is that Vince Wilfork is taking off-season training tips from JaMarcus Russell, doubling his weight so he can play both defensive tackle in Bill Belichick's 3-4 scheme and quarterback in the new "Oakland-style" offense the Patriots are experimenting with.

Again, only someone with telepathic access to the next temporal level of existence can come to the conclusions writer Ron Borges comes to. That, or Borges is a f*cking idiot who is overpaid to write about crap he knows nothing about. We suggest you gaze into your crystal ball, and be judge yourself.