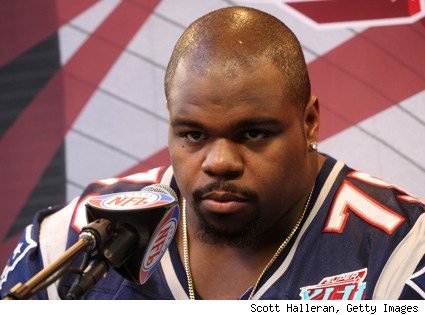 Recently, while sitting on his coach eating fifteen Whoppers dipped in pork lard, defensive tackle Vince Wilfork decided to look at the weight clause in his new contract with the Patriots. This is what he likely saw:

Whether he simply misinterpreted the data, or his arteries where so clogged they were preventing oxygen from reaching his brain, Vince decided that the only way for him to meet his weight bonus milestones was to eat more. This explains why employees at a Watertown KFC have emailed us daily updates on Wilfork driving up to the take-out window in a rented U-Haul truck, ordering 157 buckets of extra crispy and about 500 gallons of gravy.

Fortunately, Pats Pulpit's Marima has intervened and contacted Wilfork's wife, Bianca. We're told Vince has been informed that the incentives are for him to lose the weight. Embarrassed, disappointed, and slightly annoyed that he bought $50,000 of fried chicken for nothing, Vince has agreed to be put on a low-fat, cottage cheese diet... dipped in pork lard.