Chatting with the Bills - No not THOSE Bills, Bill Belichick and Bill O'Brien

Share All sharing options for: Chatting with the Bills - No not THOSE Bills, Bill Belichick and Bill O'Brien

First, I want to thank you for all that you've done for the franchise since you arrived here.  You made the team perpetually competitive and a joy to watch.  First class in every way.  Unfortunately, your success comes back to haunt you as your coordinators and assistant coaches are pillaged and plundered by lesser teams.  As always, you have a back up plan waiting in the wings, but sometimes they may take a year or two to get running again.  That's understandable, and we as fans can sympathize to a degree.

Now I realize that you have forgotten more about football than I know, and normally that would prevent me from discussing the topic with you.  However, it is what you may have forgotten that I want to address.  I know you are a very busy man and wear a number of hats (Head Coach, General Manager, Coach Trainer, Player Instructor, etc.) within the Patriots organization.  At times it must be very difficult to keep everything straight.  In addition, advancing age isn't known to sharpen mental acuity, and you are no longer a spring chicken as it were.  All of that may have culminated in a couple rules you may have over looked.

First of all, Tight-Ends while useful as blockers are also allowed to catch passes.  Really, I checked.  In fact some teams use them extensively.  You remembered that didn't you?  I saw the glimmer of recognition how you game planned on defense to stop other team's what?  Tight-Ends, yes that's very good.  I realize that with a new defacto offensive coordinator, you had to give him a some what limited playbook, but passing to Tight-Ends once in awhile can throw off a defense as well.

Oh, and while we're on this subject, there's that whole Tackle Eligible thing.  Right, I know you know that you have to declare them, but that Eligible thing means they're allowed to catch as well.  No, really, they are.  I was just thinking that tossing old Vollmer out there as what looks like a lead blocker on an end around, oh and while we're chatting here, maybe give Faulk the football and start running that way for the sake of argument.  Then after Vollmer creams the linebacker, he turns around for a nice little toss from Faulk.  Vollmer's what, say 6-8 -ish, and he can catch a pretty high ball.  Now at around 300 pounds with nothing but defensive backs to stop him....  Yeah, you see what I'm saying.  Sure, jot it on that napkin right there, I'll wait.

Ok, one other small thing is that you really are allowed to run the ball in the second half.  Even if you are behind, it helps tweak things and make them funky fresh as it were.  What's that?  Right, I mean it keeps the safeties honest.  Sure and if you catch them off guard you may even be able to break loose a big run.  You know Maroney's capable of it when he's not Dancing With The Stars.  Right, that's a simple one, don't need to write that down.

Sure I know you have to run, so this will be the last one.  I want you to think back to the super bowl days, no not 2007, the ones you actually won.  Ok, now what's missing?  Want a clue?  Screens.  Remember screens?  No?  Well, let's take a look at the tapes.  Got any?  Yeah, I know you hear that all the time.  Hey, nice camera.  Ok, now lets play the tape and....  Right there, and there, and there, and, oops you missed one, and there, and there, and ....  Ok, you see what I mean.  Anyway Welker's not the only guy on the team that can catch stuff like that.  Running backs can do that, Tight-Ends - we talked about those, etc.  Anyway, keep those in mind as you advise Bill O'Brien this year, Ok?  Great!  Good to talk to you, and the hoodie looks mahvelous.

Hey, good to see you.  I chatted with Bill Belichick and he's got some things to go over with you about this upcoming season.  Oh, no - don't say that!  Hey, I'm Wes Welker's biggest supporter, but the season isn't over just because Wes isn't starting.  Cheer up little camper.  Crayons?  Oh, I see, Bill only gave you a box of 8 Crayolas your first year as "coordinator".

Sure, and your fast little white Welker crayon is broken.  Sure is a short crayon...Oh, that's because you just about used it up.  Well, never fear even in the box of eight, there are other colors to use.  Yeah, I know how they keep doubling up that Randy crayon, and.... What?  No, that's just your perception that those Tight-End crayons have to stay in the box and block, really, you can color with them as well.  Yeah, Bill will explain.  But I've got good news for you, Bill went out and bought you a whole new box of crayons this year.  Oh, don't worry, Wes and Randy are still in there and brand new.  Look at this.... 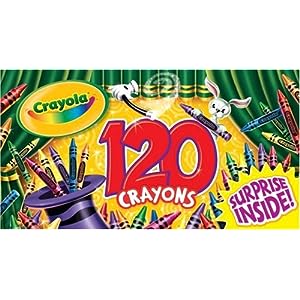 Impressive, isn't it?  And a surprise inside, I can't wait to see what that is.  Oh, sure I know you're excited to go draw with your new crayons, who wouldn't be?  But, Bill I've got one more thing to tell you.  You don't have to color within the lines.  Have fun, Bill, and enjoy.

Sigh.  I can't wait for the season to begin.