1. How's Aaron Hernandez going to fit into the passing game?

Everyone who is covering the Patriots OTAs has mentioned tight end rookie Aaron Hernandez and how he's been absorbing the playbook. He's been spotted playing with the first team offense and he should definitely be able to produce with the big boys. He's, by no means, surpassed fellow tight end draftee Rob Gronkowski, who is pushed behind the more experience Alge Crumpler in the depth chart. Hernandez enters the team at an interesting position- no player can do what he does. No player has his combination of size, strength and speed on the Patriots roster. Hernandez is competing with himself. If he does well, he'll play. If he doesn't play well, he'll sit on the bench. His play time won't be due to another player outperforming him- it'll be dependent upon his own production.

People are talking about how Hernandez will impact the offense with a Dallas Clark like impact on the passing game. I'm going to put Hernandez's target a little lower; Clark put up absurd numbers after many years of experience. I'm just looking for Hernandez to have any impact at all. If Hernandez plays as a WR/TE/HB tweener, I'll be more than happy with a 25 reception, 300 yard season- that'd be fantastic as a rookie.

I know everyone doesn't have full faith in Offensive Coordinator Bill O'Brien to construct a working play on offense that utilizes all the offensive weapons. Therefore, I grabbed my crayons and have taken the liberty to make my own.

See the play and two extra points after the jump! 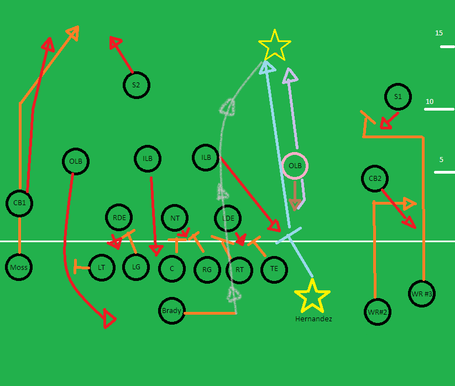 So what happens here? Let's do a run down.

The Patriots are facing a 3-4 defense. In response, the team is going into a two tight end set, with Hernandez set a little behind the other tight end. Moss is isolated on one side in order to draw the safety over to his side of the field. WR #2 (Edelman or Welker) runs up 3-4 yards and heads to the sideline, drawing the cornerback closest to Hernandez away from the play. WR #3 (Holt, Price or Tate), who loves to block, will run downfield, draw the opposite safety and block him to take him out of the play.

Due to how many receiving weapons are on the field, we need the 2 TE set to give Brady time to have the play develop before the pass. Too many times last season, Brady was forced into a bad decision because he wasn't given enough time to have a man become open.

Hernandez runs up on Gronkowski/Crumpler's shoulder and chips the ILB who is chasing Brady. The OLB who is left covering Hernandez bites because he believes that Hernandez is blocking and Brady is left "defenseless". As soon as the OLB bites, Hernandez continues to run up the middle of the field, forcing the OLB is recover and try and cover the strong, tall and fast Tight End down field. Mismatch.

Now Brady will have to deal with the LBs, but I believe that the in-line tight end will be able to leave Sebastian Vollmer at RT to deal with whatever ILB is nearest to Brady. Hopefully, that gives Hernandez enough time to go 15 yards down field with an OLB trying to catch up. WR #3 should be doing his job and occupying the safety in the area, meaning that there should be no support trying to take down Hernandez.

15 yard play and plenty of yards after the catch.

(note: This is basically me playing Madden. I have no idea if this play would work.)

In what has quickly transformed from a weakness into a potentially talent filled position, the Patriots seems to never rest with their wide receivers. Today, WEEI reported that the Patriots brought in WR Rod Owens for a workout. Seeing how this article is one of the first seen when searching his name, I don't think Owens will be a part of the Patriots. That said, I'm curious as to why the Patriots are even still looking at more wide receivers.

You have to think that Moss, Edelman, Tate and Price are the 4 players who are absolutely certain of roster spots, assuming Welker begins the season on the PUP list. I think the Patriots will be willing to hold 6 receivers on the roster just because of the sheer depth available. That means Holt, Aiken, Slater, Patten, Jenkins, Farnham and Anderson are all fighting for the same 2 roster spots.

As a special teams captain, I have to give Aiken a nod for one of those roster spots; that leaves 1 spot for the rest of the available players. Now the 6 remaining players should provide enough competition for the last roster spot, but it seems the Patriots are still keeping their eyes open. How has the chemistry between Holt and Brady appeared? Will Slater have a spot on the team as a special teams player? Will General Patten have a spot?

In my opinion, I think that Holt is fighting Farnham and Anderson for the final roster spot. I eliminate Slater because I think the team can squeeze him in as a defensive roster slot, if they keep him at all. He has no value as a wide receiver. I eliminate Jenkins because I think he would've been promoted to the actual roster last year if he had shown promise- and we needed plenty of help at receiver last season. I get rid of Patten because of his age. I have to believe the team would be willing to have their #6 receiver, who most likely won't see the field at all, be a young player who can learn, rather than an old player with no real future.

I have to think that Holt makes the roster over Farnham and Anderson, mostly because of how smooth Holt is. I think Farnham and/or Anderson will find a nice niche on the practice squad for this upcoming season.

3. Look at the bright side of the Logan Mankins situation- at least we're not these other teams:

a. Tennessee Titans: Their star running back Chris Johnson wants more money. If he doesn't show up, the Titans have no offense. He wants to be paid like the best offensive player in football. Chances of that happening? Near zero. Where does that leave the Titans? In a sticky situation.

b. Cleveland Browns: First off, they're the Browns. That should be enough. However, their only good player, running back Jerome Harrison, wants a new contract. In response, Gregg Rosenthal is making a mountain out of a molehill by wondering why the Browns played Hardesty with the first team offense (did he expect the Browns to practice without a running back?). Still, they ARE the Browns and, much like the Titans, when your only good player on offense isn't happy with his contract...uh-oh.

c. Pittsburgh Steelers: Ben Roethlisberger. Oh, and there are fights at their organized team activities.

d. Buffalo Bills: Much like the Browns, it should be enough that they're the Bills. However, unlike the Browns, the Bills are lucky to have offensive weapons in running backs Fred Jackson and C.J. Spiller, as well as wide receiver Lee Evans. So when running back Marshawn Lynch doesn't show up? Oh dear.

e. Miami Dolphins: While the 'Phins have spent a lot of their off-season upgrading their off-season, Head Honcho Bill Parcells prides himself on having a smart team ("DUMB PLAYERS DO DUMB THINGS. SMART PLAYERS VERY SELDOM DO DUMB THINGS"). This off-season has been off the charts for the Dolphins. Some have turned to calling them the "Bad Boys of the NFL." Two DUIs and two counts of domestic abuse. They resigned a nose tackle who's suspended for the first half of the season. They grabbed the dirtiest player in the league in lineman Richie Incognito. Fantastic.

g. Indianapolis Colts - WR Reggie Wayne, DE Robert Mathis and S Antoine Bethea aren't going to the OTAs. Those are three extremely crucial players for the Colts- which is even better for the Patriots. At least Wayne sounds articulate in his holdout letter!

So the next time we get bummed out that guard Logan Mankins isn't showing up to OTAs, keep in mind: It could be much, much worse.