Share All sharing options for: Top 5 Most Intriguing Defensive Patriots at Training Camp

Not long ago Patriots Training Camp was mostly about praying our star veterans didn't get hurt. Our team was proven at almost every position (except maybe cornerback) and there was little doubt who was going to be playing where.

But now the Patriots are a team loaded with unproven youngsters, and at least four to five positions on the defense could be up for grabs for those players.

If the Patriots hope to repeat in the AFC East it will be imperative that some of these players emerge into high quality starters this year. My five most intriguing young Pats with a chance to make that jump after the jump...

5. Tyrone McKenzie - McKenzie blew out his knee before ever getting the pads on in 2009 after being selected in the third round. McKenzie played in three different defenses in college and contributed to all of them. Based on this quote from Belichick you have to feel pretty good about his character too:

"I would just say of all the players that I've talked to and we've interviewed this year and even through the years, that Tyrone is amongst the most impressive," Belichick said. "Maturity, intelligence, what he's done with the opportunities that he's had or that he's had to overcome, how he's approached them, how he's dealt with them, how he's made the most of them ...

"It hasn't been easy, yet he's continued to excel, jump over hurdles and overcome obstacles that I think would have derailed a lot of other people and/or football players. I think he's a very impressive, mature, humble young man."

The question about McKenzie is really how he will fit into the Patriots defense. Can he rush the passer? Can he shift to the outside in a 4-3 scheme? Is he too similar a player to Mayo? His versatility gives him a good shot to contribute, but until we see him on the field in pads we have no way to know how or where he will.

4. Patrick Chung - I know, you're probably sick of me pumping Chung like he's Rodney reincarnated, but based on what we've seen in mini-camp, and heard  from inside the locker room and practices it sounds like Chung is the real deal. When you look at the great defenses of the NFL past there are always defenders who play on the edge. Rodney Harrison was one and Chung looks to be one as well.  If you haven't seen his blocking in the clip below please watch it now...

If Chung is not the game one starter opposite Brandon Meriweather I will be extremely disappointed. He flies around with reckless abandon, has the speed to play deep safety, but also the size and strength to be a playmaker near the line of scrimmage like Harrison was. He's had a year to pick it all up, now it's time to put it all together.

3. Devin McCourty - is it just me or is everyone sleeping on McCourty right now? What we can say is that as long as he's healthy McCourty will contribute to the 2010 Patriots, whether it's only on Special Teams, as a sub-DB or even as a starter opposite Leigh Bodden.

What McCourty should add is a strong run support presence from the nickel slot position, a place where Jonathan Wilhite was often outmanned in 2009. Teams will often try to run on defenses when they're in a nickel or dime package, but McCourty should be a real asset as a corner who is physical and comes down hard to tackle opposing running backs. Don't underestimate how much McCourty's versatility will help the Patriots keep other promising young players when it comes time to cut the roster to 52. Oh, and he can run backwards almost as fast as he can run forwards:

2. Jermaine Cunningham - For all the Patriots fans who were clamoring for Jerry Hughes or Sergio Kindle in round one Cunningham was the consolation prize that sent us all to the internets to find out how we overlooked the Pats second round pick. After so much buildup about the Pats needing a pass rusher Cunningham was a surprise pick, though Mel Kiper later said upon watching more film he was impressed with how "relentless" Jermaine was.

It's hard to expect much out of a rookie, especially at outside linebacker but given Cunningham's draft position, physicality, and pedigree it's hard not to think he can at least contribute as a sub-rusher in 2010. And of course there's that small part of you that wonders maybe, just maybe, he could be step right in and play all three downs.

1. Shawn Crable - I know I'm going to get killed for this but the fact is on paper there's not another Patriots OLB with better length or speed than Crazy Legs. There is no question that this guy was brought in for one reason: to rush the passer. He's made plays in the few preseason games he's played in, and with two years in the Patriots playbook he should be far more mentally prepared to contribute than Jermaine Cunningham is. And don't tell me he doesn't look like a badass pass rusher in the pic below... 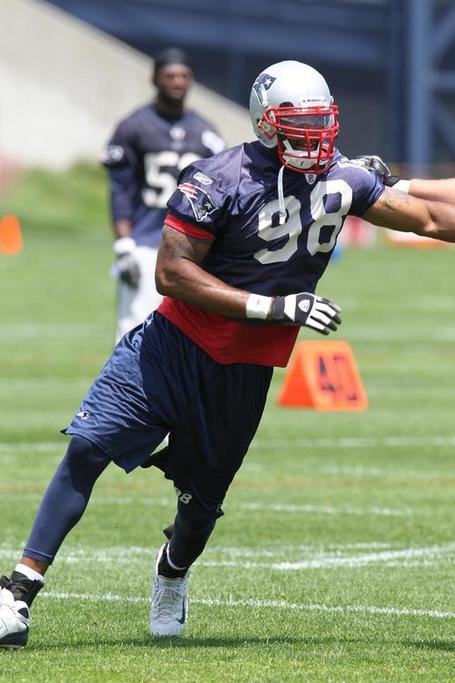 OK, just ignore his calves. You also cannot discount that Crable knows it's now or never for him. He should come to camp with a ferocious attitude if he wants to make the team. For a player who was never injured in college these were surely a rough couple years for Crable, and that is why I believe he is the most intriguing player in Patriots Training Camp.