Share All sharing options for: Patriots-Saints Afternoon Practice: View From The Bleachers

Another terrific practice on a hot and muggy August afternoon in New England.  It's the last one I can attend this year but I'm grateful that I've been able to hit so many.  It's a great deal for the fans and an opportunity to get familiar with the 2010 team before the season starts.

This afternoon's session saw pretty much the same format as the morning, beginning with stretching and warm-ups for both teams.  Saints on the far field and Patriots near the bleachers.  That was followed by individual drills, with each team broken down by position.  One twist here was watching Matt Patricia rolling a large weighted ball at the linebackers as each came off the line at the snap.

Special teams work included New England kicking off to the Saints return team.  The Saints had a play where the returner caught it and promptly threw it to the other side of the field, causing the Pats to have to change direction.  It was thrown back and forth a couple of times before the referee blew the whistle.  Gostkowski practiced some onside kicks here as well.

Seven-on-seven drills are really fun to watch. Tom Brady and Brian Hoyer switched off with Drew Brees and Patrick Ramsey.  Brady completed passes to Hernandez, Taylor and Welker.  Moss dropped one and Brady wasn't too happy with his throw (but managed to throw his helmet down afterward).  Hoyer completed passes to Edelman, Gronkowski and Darnell Jenkins.

Special teams work continued, this time with the Saints kicking off to Patriots returners.  Julian Edelman, Devin McCourty, Brandon Tate and Taylor Price took turns returning.  Tate is shifty and can turn on the burners.  McCourty surprised me with his speed.  Nice getting as many rookies involved on special teams as possible.

More after the break...

Tom Brady made a point to walk the sideline and stop to speak and pump fists with each receiver, tight end and running back after his series was finished and Hoyer was under center. 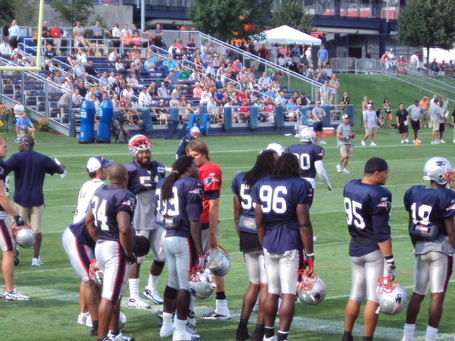 The team period featured the full New England offense vs. the full Saints defense, and the full Saints offense vs the full New England defense.  This is clearly the best part of these practices. Brandon Spikes would have made a highlight reel with his break up of a Drew Brees pass.  Brady had a pass knocked out of his hand just as he was about to throw.  Laurence Maroney had a nice run too.

The two-minute drill featured Darius Butler breaking up a Brees pass.  The Saints were using a hurry-up offense with Brees connecting to RB Lynell Hamilton, throwing an incomplete pass, connecting for a first down and then an overthrow into the endzone.  The Saints series ended with a Terrence Wheatley interception.

Tom Brady began his series with a bomb to Hernandez that he dropped, a pass to Tate, two passes to Welker, one overthrown, and a completed pass to Hernandez.  Brady overthrew Moss with two guys on him and then had a pass blocked. The field goal unit came out with Gostkowski kicking it with 4 seconds left.

The defenders for the Saints were a bit grabby in my opinion, holding onto the Pats receivers and running backs a tad longer than necessary.  This was evidenced by Moss having his shirt ripped and Kevin Faulk yapping at the defenders a few times before walking away.

The practice finished up with the Zac Robinson leading the third team against the third team for the Saints and vice versa.  The players for each team huddled up afterwards, and maybe a dozen players headed off to the bleachers and end zone to sign autographs.  My daughter scored Vince Wilfork and Drew Brees signatures to add to her extensive collection.  Being young and blond has its advantages.

Ron Brace signed autographs for the masses.  At least his hand can pass the conditioning test. 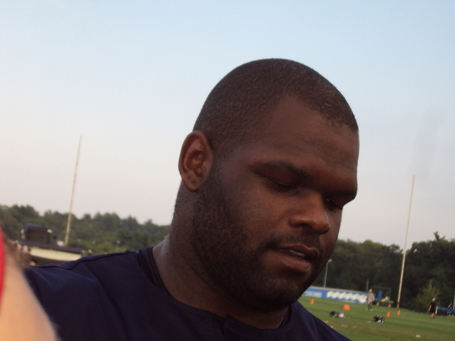