NFL Playoffs: Patriots vs. Jets Will Be a Physical Battle

Share All sharing options for: NFL Playoffs: Patriots vs. Jets Will Be a Physical Battle

If you watched the Jets in the second half Saturday against the Colts, you probably noticed that they out-physicaled the Colts along the line, and chewed up a lot of ground in the running game, ultimately controlling the tempo and keeping Peyton Manning off the field for long stretches at a time.  LaDainian Tomlinson and Shonn Greene had a combined 35 carries for 152 yards and both of the Jets touchdowns.  Lets look at the Jets two touchdown drives:

More on the Jets-Patriots and what the Patriots need to do after the jump!

Also consider that the Colts were a little beat up on their front seven, with the likes of run-stuffing defensive tackle Antonio Johnson out.  The Jets took advantage.  Looking ahead to the Jets-Patriots match-up, I think the Jets will likely try to employ similar tactics.

The Patriots are best stopping the run when they have the defensive line of Ron Brace, Vince Wilfork, and Gerard Warren.  Of course, Brace is out for the season, so that group is no longer a possibility.  So how should the Patriots counter in their front seven?  Taking a lot into consideration, here's what I feel the Patriots' front seven should look like: 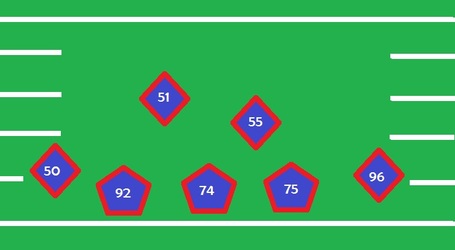 As you can see, I went with Kyle Love at nose tackle.  If the Patriots want to bring their most physical line-up, I think Love is the answer.  While he certainly isn't the most polished defensive player, I think he can hold his own, especially with the return of Brandon Spikes.  Speaking of Spikes, he's back in his usual strong-side inside linebacker position.  When Spikes left the line-up due to his suspension, the Patriots' had a serious drop-off in their run defense.  Spikes should be able to eat up, knife through blocks, and come up with big plays against the run.  At defensive end, I put in Vince Wilfork and Gerard Warren.  Having them on the inside shoulders of D'brickashaw Ferguson and Damien Woody should certainly help to take away the off-tackle runs that the Jets love, and had great success with against the Colts.  At outside linebacker, I went with Jermaine Cunningham on the strong-side and Rob Ninkovich on the weak-side.  Both are good at setting the edge (with Ninkovich slightly behind Cunningham).  However, Cunningham has been struggling with a calf injury as of late, so I wouldn't be surprised to see Eric Moore get some run on the strong side.

Other players that could see some time in the base 3-4 include Brandon Deaderick, who will likely move to right end with Wilfork moving over to nose and Gerard Warren switching over to the left.  Myron Pryor could also see time in place of Kyle Love at nose tackle, or even play a pinch at defensive end.  Tully Banta-Cain should also get some playing time, mostly as a right outside linebacker.

But what if the Patriots want to change things up a bit?  I could definitely see the team going to a "big nickel."  A package that enables them to still stop the run, while having the versatility to defend the pass.  Here's what I came up with: 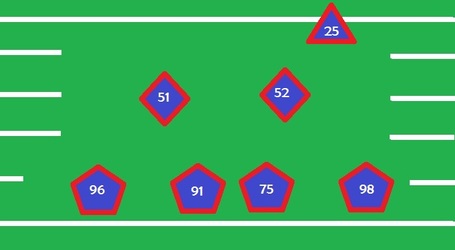 In this sub-package, you've still got Vince Wilfork in there at left-defensive tackle to stuff the run and push the pocket.  He's paired with Myron Pryor, who is the team's top healthy interior rusher, but can also hold his own against the run.  At defensive end, I've put in Eric Moore strong-side, and Jermaine Cunningham weak-side.  This sub-package would likely be a great spot to stick Mike Wright, as he can do a little of everything.  Unfortunately, Wright is out of action, meaning the next-closest thing to him is Eric Moore, who has shown a variety of skills in his month with the team, from his ability to rush to passer with his hand down, to his ability to set the edge and makes stops against the run.  At ROLB, the Patriots can rotate Cunningham with Tully-Banta Cain, although Cunningham can stop the run better.

There is one major change at linebacker.  At sam-linebacker, I've put in Dane Fletcher.  Fletcher is a better force stopping the run than Gary Guyton is.  He has also held his own covering running backs and tight ends.  And as I've said, Guyton isn't a very good run defender.  So when the Patriots go to their "big nickel," Fletcher is a better option than Guyton.  Lastly, in this big nickel package, I've got Pat Chung moving down into the box, presumably with Brandon Meriweather and James Sanders as the safeties (not pictured).  If the Jets turn to a three-receiver package, Chung can move out and cover the slot.  If not, he picks up the tight end in passing situations, or assists against the run.

Of course, these are just two packages that I think are well-suited to stopping the run.  There are plenty more packages and substitutions the Patriots can make.  The bottom line is this: next Sunday's game will be a very physical one.  And if the Patriots want to win, they can't let the Jets control the tempo like they did against the Colts on Saturday.