We've already talked X's and O's for this Sunday's divisional playoff match-up between the New England Patriots and New York Jets, and now we'll talk about a potential x-factor for the Patriots.

One of the main reasons the Patriots were able to put up 45 points on the "vaunted" Jets defense in week thirteen was because of the offense's ability to create mismatches on Jets defenders. One play you would see three tight ends in a bunch formation, the next, you would see one of those tight ends, say, Alge Crumpler, split out wide (and drawing Darrelle Revis in coverage). Using different movements and motions, the Patriots could then bring in a player such as Wes Welker into the backfield, and have him matched up against a linebacker (a real win-win for the Patriots).

With all of the different personnel packages the Patriots were able to use, the Jets often found themselves out of position and with linebackers matched on skill players. We know that both teams are going to employ a lot of new strategies and ways to combat the other team's strengths. The Patriots will probably try to employ new tactics to create mismatches on Jets' linebackers. One player probably not on the Jets' radar: Julian Edelman.

Find out why Edelman could be the x-factor for the Patriots after the jump!

Yes, I'm fully aware that Julian Edelman hasn't been featured much on the offensive side of the ball this season. In fact, heading into last Sunday's victory against the Miami Dolphins, Edelman had just four catches for 14 yards on the season. But that doesn't mean he isn't talented, and it doesn't mean the Patriots haven't tried to get him involved.

First of all, Edelman will be a force as the Patriots' primary punt returner. But I think, if the Patriots use him in a variety of ways, he could be a weapon on offense. If the Patriots can motion Edelman out of bunch sets and into the backfield, he can create some big time mismatches on linebackers. Hell, the Patriots could even throw him a shovel pass, pitch, or let him carry the ball on a direct snap.

We saw the Patriots use Edelman in the backfield at times during training camp, and even a little bit early on in the season, before the emergence of Danny Woodhead. He's got his confidence up after a big time performance against the Dolphins and showed just how elusive he is with the ball in his hands. With both teams looking for a new wrinkle to catch the other team off guard, don't let Julian Edelman be a forgotten man.

As a bonus, and just for fun, consider a play like this: 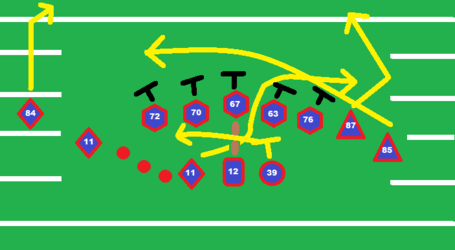 In this play, you've got a basic shotgun, with two tight ends bunch to the right in Aaron Hernandez and Rob Gronkowski (Gronk inline), Deion Branch as the flanker to the weak-side, and Julian Edelman as the slot receiver next to him, with Danny Woodhead as the lone back in the backfield. Edelman motions from the slot receiver position into the backfield with Danny Woodhead. At the snap, Brady actually fakes the play action to Edelman, who sneaks through the 2-hole and sneaks out to the right flat. Ideally, a linebacker would be matched on Edelman if the Jets are in man defense. And if the Jets are in man, you've got Aaron Hernandez crossing over the middle to set a "pick" for Edelman, as well as acting as Tom Brady's second read on the play. With the Patriots bringing two tight ends, and just one receiver out wide (hopefully to occupy Darrelle Revis), you're bound to have either Aaron Hernandez or Julian Edelman getting free.

Should the Jets switch to zone to account for mismatches like this, you've got two thing working in your favor on this play. First, Tom Brady is unbelievable at picking apart zones. Second, you've got Rob Gronkowski running a very zone-friendly route, that should get him matched up against a much shorter safety such as Eric Smith.

Lastly, Danny Woodhead will likely stay in to pass protect. However, he could also act as a last-option for Brady as a checkdown. I should also add that Deion Branch (this could also be Brandon Tate) is running a post route to take the top off the defense, and to occupy a Jets cornerback, preferably Darrelle Revis. This play was designed with Julian Edelman in mind, but could easily be run for a guy like Wes Welker. Finally, tight end Rob Gronkowski will mike a hit on the Jets' outside linebacker coming out of his route to disrupt the defenders timing. Hell, if you wanted, you could even switch out Danny Woodhead for Wes Welker, putting both Welker and Edelman in the backfield, and really have fun with that. Ultimately, it's play designs like these that could force the Jets to switch to a zone, which will certainly make things easier for Tom Brady.