Story of the Season: Development of the Secondary

Share All sharing options for: Story of the Season: Development of the Secondary

Hey everyone! I'm back from my vacation with some fun facts for the Patriots' Bye Week. One of the most important storylines for this season has been the development of the Patriots' young secondary. Over the course of the season, the Patriots have utilized rookies Devin McCourty and Sergio Brown, sophomores Darius Butler, Pat Chung and Tony Carter, 3rd years Kyle Arrington and Jonathan Wilhite, and then 4th year Brandon Meriweather, 5th year Jarrad Page and 6th year James Sanders. This is a young secondary with very little veteran leadership and to see them develop over the course of the season has been a treat for Patriots fans everywhere.

I know that I've spoken poorly about this secondary, especially during the beginning of the season. However, this defense has grown into a unit that can be trusted. Here are some fun facts about this defense:

The Patriots have an interception in each of their past 8 games.

The Patriots have sacks in 7 of their past 8 games (the only non-sack game was against the elusive Peyton Manning).

Opposing quarterbacks completed 68% or more of their passes in each of the first 8 games.

Opposing quarterbacks have completed 68% or more of their passes in only one of the past 8 games (again, Manning).

Opposing quarterbacks have completed under 59% in 5 of the past 6 games (Matt Flynn is the only exception).

Only one quarterback has had a multiple touchdown game in the past 6 games (Matt Flynn), and quarterbacks have thrown zero touchdowns in 3 of the past 5 games.

Let's take a look at some impressive trends after the jump!

The following table is a list of the opposing quarterbacks' statistics while facing the Patriots.

Just look at the numbers. Three of the past four quarterbacks (the Dolphins quarterbacks are combined), have completed under 50% of their passes. Only Ryan Fitzpatrick has topped 250 yards through the air in the past 5 games and he threw for 251 yards. This secondary has clamped down on opposing quarterbacks and are having great success.

Some might point and say that the Patriots offense is running on all cylinders and are forcing opposing teams to throw the ball more frequently- so of course the defense is going to be more opportunistic. Well, quarterbacks threw 35 times/game in the first half of the season and have been throwing 39 times/game in the second half. However, they averaged 25 completions in the first half and under 23 completions in the second half. That means that despite quarterbacks throwing the ball more often, the Patriots are allowing fewer completions. 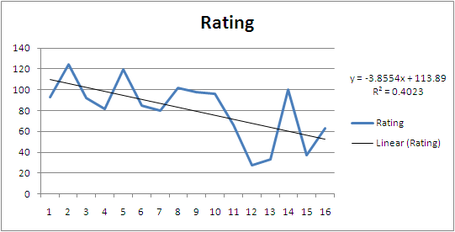 While 16 games is a small sample size, there's a clear downward trend in opposing ratings, which means that the defense is finding ways to stifle opposing offenses.

Just look at the line go down. This defense is locking down on opposing quarterbacks and the key to the continued success of this team is shutting down the opposing team's quarterback in the playoffs. The Patriots will be matched up against Ben Roethlisberger, Peyton Manning, Matt Cassel, Joe Flacco and/or Mark Sanchez in the AFC, which is a great group of players. The prime candidates to win the NFC include Matt Ryan, Jay Cutler, Michael Vick, Drew Brees and Aaron Rodgers. The only name missing from this list is Phillip Rivers and then all of the top quarterbacks in the league would be on the list (and Sanchez). The Patriots have their work cut out for them if they want to win the Super Bowl and it starts with stopping the quarterback. The growth of the young secondary from McCourty to Chung has certainly helped the Patriots defense.

There was very little trust in the defense by fans, myself included, early on in the season, but it looks like this secondary is up to the task. I think that they've earned some trust.