Looking at your standard box score, it's easy to see why someone could believe that Patriots defensive lineman Albert Haynesworth is struggling.  He hasn't recorded a statistic since week one and no one is going to deny that he has struggled to see the field consistently due to a lingering back injury (and possibly poor conditioning).  However, in re-watching last Sunday's game against the Dallas Cowboys, there is clear evidence that Haynesworth is headed in the right direction.

All of that being said, lets break down three plays where Haynesworth seemed to make a positive impact (Haynesworth logged 27 snaps total). 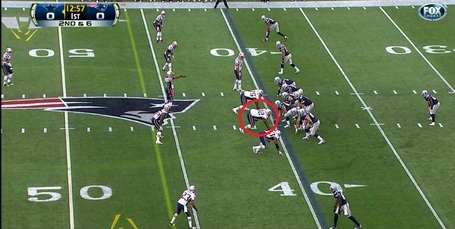 On this play, the Patriots are lined up in a basic 3-3-5 defense, with Rob Ninkovich acting as a hybrid DE/SLB and Kyle Arrington as the star cornerback.  Dallas is lined up in a basic "11" personnel formation (one back, one tight end) with Tony Romo over center and two receivers to the right. 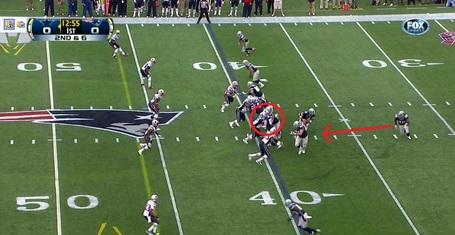 The play is a simple hand-off between the left guard and tackle (B gap, 3 hole).  Haynesworth got a good jump off the line and briefly faced a double team from Dallas center Phil Costa and left guard Bill Nagy. 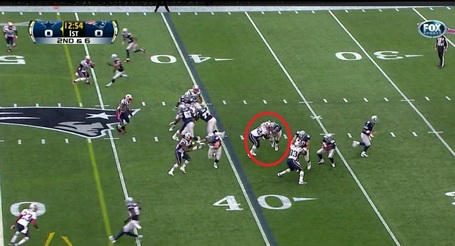 As Haynesworth continues his push, Nagy releases and goes out to block linebacker Brandon Spikes on the second level.  Defensive end Andre Carter also gets a good burst off the snap, initially eliminating Felix Jones' option to break the ball to the outside. 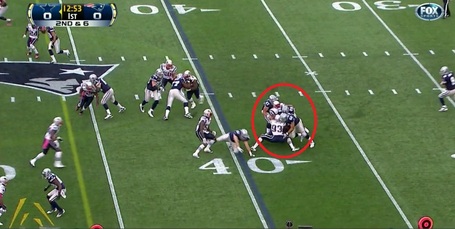 Haynesworth then continued to push Costa back until he broke off the block and engulfed Felix Jones.  Unfortunately, Haynesworth wasn't able to finish off the tackle.  Jones broke away, and because Andre Carter was sucked into the play, was able to bounce back outside and pick up three yards.

Nonetheless, Haynesworth's penetration into the backfield helped slow down the run and prevent Felix Jones from getting into open space against Brandon Spikes.  The very next play, Kyle Arrington intercepted a Tony Romo pass and the Patriots had successfully thwarted the Cowboys' opening drive.

Analysis of two more plays after the jump! 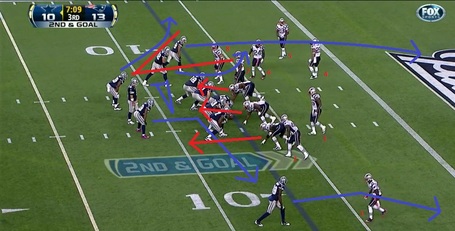 The Cowboys are lined up in a shotgun formation with two backs in the backfield (21).  Tight end Jason Witten is lined up in the slot to the left, bunched next to receiver Miles Austin who is on the line.  On the bottom of the screen, Dez Bryant is lined up in one on one coverage with Devin McCourty.  On this play, the Patriots are in a 3-3-5 and are showing blitz with their three linebackers.  However, the Patriots will drop 8 into coverage, with each of the linebackers in man (Guyton-RB, Spikes-RB, Ninkovich-TE) while rushing only three - Haynesworth, Vince Wilfork, and Andre Carter. 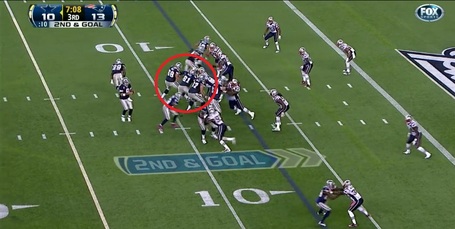 On the snap, Haynesworth and Carter get terrific jumps.  Wilfork gets held up at the line by right guard Kyle Kosier. 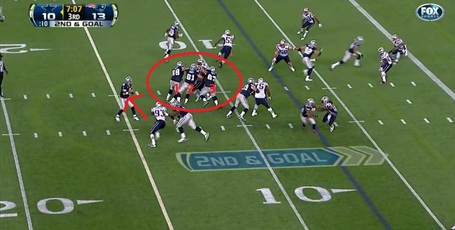 As the play continues, Albert Haynesworth takes on a trio of Dallas blockers (Doug Free, Nagy, Costa), and continues to generate a push.  By eating up three blockers, it allows Andre Carter to be freed up in a one on one scenario with Dallas' rookie right tackle Tyron Smith.  Carter blows by Smith and takes Tony Romo down for the sack.  The Patriots end up holding Dallas to a field goal, which becomes crucial to the outcome of the game. 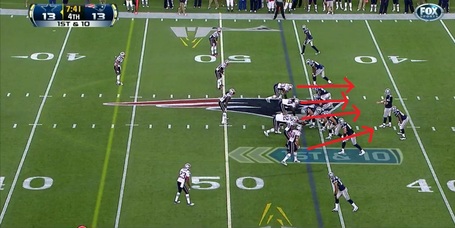 On this fourth quarter play, the Patriots are once again lined up in the 3-3-5 front with linebackers Ron Ninkovich and Gary Guyton stacking the line against tight end Jason Witten / running back Felix Jones of the Cowboys, who are once again in '11' personnel..  On the snap, the Patriots rushed four (Carter, Kyle Love, Haynesworth, Ninkovich), while dropping seven into coverage. 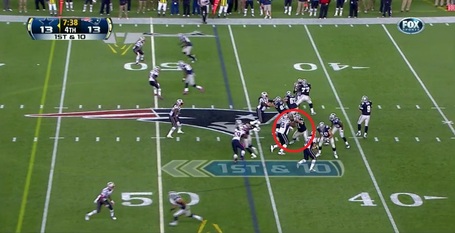 Haynesworth took on Cowboys left guard Bill Nagy one on one.  Haynesworth once again got a great burst off the snap, and drove Nagy straight back. 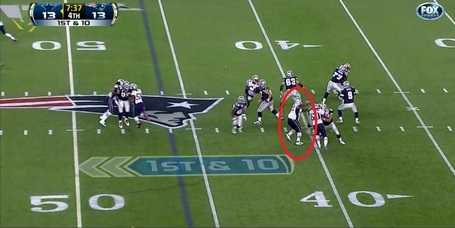 With Ninkovich and Carter rush upfield and contain Romo within the pocket, Haynesworth continues to drive Nagy back and eventually sheds the block. 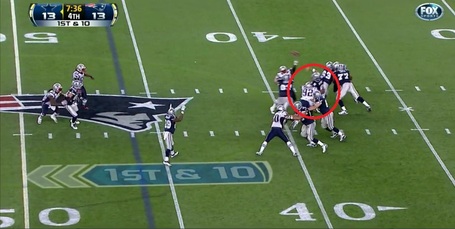 After shedding the block, Haynesworth then closes on Tony Romo and makes the hit just after Tony Romo gets rid of the ball.  As a result of the pressure, Romo throws up a duck that is nearly intercepted by Kyle Arrington / Patrick Chung of the Patriots.  There's nothing too fancy about this play, just an example of Haynesworth winning yet another one on one match-up.

Albert Haynesworth didn't have a monster game last Sunday.  However, it was clear from my re-watch of the game that Haynesworth is making a positive impact on the field.  The Patriots were playing Haynesworth mostly in sub-packages against the Cowboys, but in a variety of down and distance situations.  As the season wears on, I would expect to see Haynesworth in even more base defense situations, and I think we could see him playing 35-45 snaps per game.

One of the things that really stood out to me from Haynesworth's performance was his effort in taking on double and triple teams.  He was occupying blockers, still getting a push, and not giving up on any plays.  Sure, he didn't put up any big numbers, but he's helping the rest of the team play better.  And that's exactly what the Patriots need from Haynesworth - someone who is playing with a high motor and making his teammates better.

All of this isn't to say that Haynesworth is going to be the end-all answer for the Patriots defense.  But what I saw last Sunday against the Cowboys really encouraged me, and I'm going to be intrigued if we will see more of the same from Haynesworth in future weeks.