Share All sharing options for: Patriots MVP Bracket Round 1: #7 Bodden vs. #10 Spikes

[Editor's Note: Today, we're going to officially begin our Most Valuable Patriots Player Not Named Tom Brady Bracket. I wanted to give a quick thanks to everybody who submitted their brackets, as we got a pretty good turnout. If you really still want to submit a bracket, you can. However, you just will not be eligible for any "match-ups" you miss. For those interested, here are the documents:

Thanks, and be sure to vote each day for who you think the Patriots' MVP (not named Tom Brady) is!]

The Case For Bodden: Leigh Bodden missed the entire 2010 season with a rotator cuff injury. However, in 2009 (his first season with the Patriots), Bodden was the team's number one cornerback, making 55 tackles, 18 pass deflections, and five interceptions (one of which was returned to the house). He also had two interceptions called back. He isn't the most athletic cornerback, but he is physical, smart, fluid, and has good ball skills. Next year, he could very well be the answer to a secondary that struggled at times in 2010.

The Case For Spikes: After being selected in the second round of the 2010 NFL Draft, Brandon Spikes came into training camp and immediately earned a starting job as the Patriots' SILB, beating out incumbent Gary Guyton as well as Tyrone McKenzie. Despite having marginal speed, Spikes brings tremendous instincts, strength, awareness, smarts, and explosiveness to the table as an inside linebacker. He is able to take lineman head on as well as knife through blocks to blow up plays in the backfield. Although Spikes' numbers were decent (61 tackles, 1 interception in twelve games), his biggest value may have been to Jerod Mayo. With Spikes manning the strong side and taking up blockers/freeing up space, Mayo moved back to his more natural position as a WILB, and turned back into the All-Pro player the Patriots saw glimpses of in his rookie season.

For those interested, see how I chose my bracket after the jump! 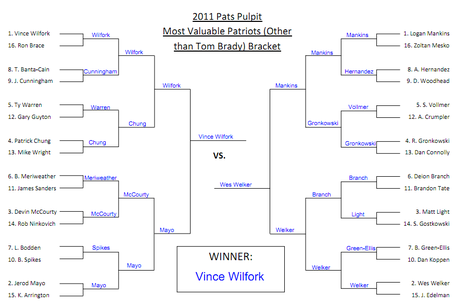