[Editor's Note:Yeah, I'm a little bit late on the whole bracket thing, but with the Final Four starting tonight, why not join in on the fun? ]

All NFL and Patriots fans alike know that Tom Brady is the most valuable player on the Patriots roster.  There isn't much debate about that.  But how about after Brady?  What Patriots player is the second most valuable?  The third most valuable?  That's the question that we're asking you to answer with our first annual Most Valuable Patriots Player Not Named Tom Brady Bracket (lets shorten that to PMVPNNTB... there we go).

Find the bracket after the jump!

The voting process is relatively simple.  We'll write up one match-up each day (possibly more in the first round), until we narrow the field down to the Patriots' MVP (not named Tom Brady).  You should base your votes not on players that you think mean the most (have the biggest impact) to the Patriots.  What they offer in the present should matter most, but their potential/future should also be considered.

I split the bracket into offense/special teams and defense, so that we can separately identify the most valuable player from each group.  Without further ado, here's the bracket: 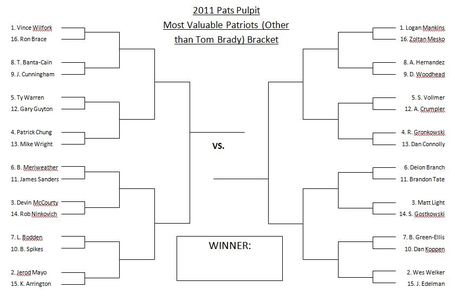 As for a little competition?  Why not?  I can't guarantee any prizes for the mean time, but I think we should do a bracket challenge.  If you send a completed bracket to PatsPulpit@gmail.com by 9:00 AM on Monday morning, you will be eligible for the competition.  I've attached the word document with the bracket at the end of this post, and I'll post a reminder tomorrow, but the first match-up will take place 9:00 sharp on Monday morning, so make sure to have emailed them to me by that point.  As for sending the bracket, I suggest using microsoft word, although you could also put your selections in via paint or a similar program.  If you really have trouble editing the document, feel free to send me a list of your selections via email.  If you have any other questions, feel free to leave a comment below or shoot me an email.