Looking at Baltimore Ravens and their deep attack, and how the Patriots can take it away.

In their week three match-up, Baltimore Ravens receiver Torrey Smith torched the Patriots secondary, recording six receptions for 127 yards. Of course, that came at a time of year when the Patriots were really struggling to defend the deep ball. Over the second half of the season, the Patriots have really improved in that area. Nonetheless, they haven't played a deep threat like Torrey Smith lately, and you can bet that the New England Patriots will make it a focus to stop him tonight.

But how do the Patriots go about doing that?

The first thing you have to consider is that the personnel for the Patriots secondary has shifted dramatically since that early season game. The Patriots starting cornerbacks in week three were Kyle Arrington and Devin McCourty. Now, they have veteran Aqib Talib and rookie Alfonzo Dennard manning the left and right cornerback positions respectively.

That makes a major difference. These two players didn't play a snap in the Ravens vs. Patriots week three contest. Heck, Talib wasn't even on the team yet. But there's one thing about these players that could worry mean when it comes to defending Torrey Smith and Joe Flacco: speed.

While Dennard and Talib can be physical, and have good closing speed, neither of them, Dennard in particular, have elite straight line speed. Against most match-ups, that might not be a huge deal, but against a speed guy such as Torrey Smith, that extra step or two could make a huge difference.

Consider this play from DeVier Posey in the second quarter of last week's Divisional Playoff game against the Texans: 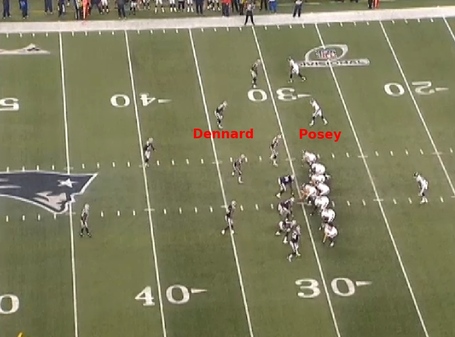 The Patriots are in their base defense here, against a basic 12 personnel package from the Texans (one running back, two tight ends). The Patriots are running man coverage, with Alfonzo Dennard in the slot on DeVier posey, and Aqib Talib at the top of the screen on Andre Johnson. Devin McCourty and Steve Gregory are the two safeties. 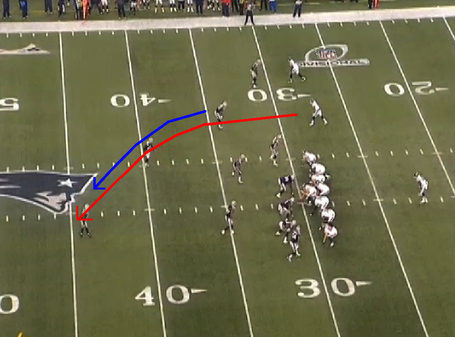 The route is a simple one. Posey is simply running a very soft post, more of a deep drag 15 yards down the field. There's no double moves, no pick plays. Simply Posey running across the field with Alfonzo Dennard in man coverage. 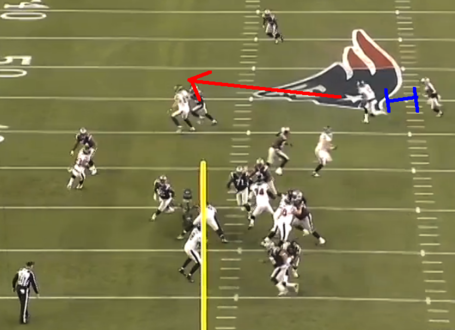 As you can see, Posey simply runs away from Dennard to create separation, and ends up with a big 25 yard gain. Of course, this isn't all on Dennard - part of the downside to man coverage is that you sometimes can give up those inside crossing routes. Nonetheless, Posey is a 4.44 guy, while Dennard is a 4.55 player. Dennard's likely match-up this week, Torrey Smith, runs a 4.4 flat, and that's a scary thought streaking down the sideline.

The easy solution to the above problem would be to move to zone coverage. However, from what I've seen the Patriots run this season, the zone hasn't exactly worked out for them. The improvements in the Patriots' pass coverage has largely been tied to the team trusting Dennard and Talib on the boundaries, and allowing them to play man coverage.

All of this being said, here are the two things that I think the Patriots must do to take the big plays away from the Ravens tonight:

1. Mix up both man and zone coverages. Be unpredictable. While I generally like the Patriots defense in man coverage, occasionally going to the zone allows some unpredictability that may make Joe Flacco feel less comfortable throwing those crossing routes.

2. Shade Devin McCourty on Torrey Smith. This is the key. Everything that Alfonzo Dennard lacks in athleticism, Devin McCourty has it. In week three, McCourty was at the left cornerback spot. Since then, McCourty has played at a Pro Bowl level at free safety. The Patriots need McCourty to be that center fielder. They need him to take good angles, and they need him to shade Torrey Smith over the top to take away that deep ball. Joe Flacco is still going to take his shots to Smith, and it's going to be up to McCourty to make the big plays, and make up for the step of separation that Smith is capable of getting on Dennard, or possibly Talib.

In fact, if Devin McCourty is able to take away the deep ball from the Ravens, it will allow the Patriots to work out of their base defense more and defend Ray Rice and the Baltimore running attack, and also allow Talib and Dennard to remain in man coverage on the boundaries.

While the Ravens still have the ability to victimize the Patriots deep, Devin McCourty is a wild card, playing a different position than the first time around, that has the ability to change the outcome of this game.