How can the Patriots justify their snap distribution for their running backs?

I'm going to lead this off by saying that this isn't a debate. This is a teaching exercise. The Patriots coaching staff has curiously decided to stash away Stevan Ridley in favor of LeGarrette Blount on early drives and it's the absolute wrong call.

I'm not going to include Shane Vereen or Brandon Bolden in this breakdown because they're both the clear choices on passing downs and in the hurry-up. I don't have a problem with that. My beef is with Blount getting early game time over Ridley.

Don't get me wrong, though: Blount does have a role on this team that's more than just being the 16th best kick returner in the league, sandwiched between Tedd Ginn Jr. and Darren Sproles (oh yeah, you think Blounts tough to watch? Half the league has it worse off). I just think his time early in the game is a waste for the Patriots.

There's no debate that having a successful play on first down will make second down all the easier, just like having a good second down determines the difficulty of the third down conversion attempt. It's also etched in stone that when a team gets an early lead, they can dictate the pace of the game. Setting the tone early is extremely important, so here's why Ridley deserves the look over Blount:

Although, to be fair the discrepancy isn't as drastic on first down, with both players receiving 11 attempts; Ridley gashing for 69 yards (6.27 ypc) and Blount bulldozing for 49 yards (4.45 ypc). That difference of 2nd and 4 and 2nd and 6 is considerable, but not worth losing sleep over, especially due to the small sample size. What is cause for concern? Second down.

Yes, I left Brady and Edelman in there for good measure. On seven carries on second down, Ridley has an explosive 7.43 yards per carry. Blount, on the other hand has a horrifying one yard on his seven attempts. One. Single. Yard.

As soon as the Patriots traded for Blount, we ran the numbers to see that Blount is actually one of the worst short yardage backs in the league, with a 54% conversion rate, while Ridley stands in the middle of the pack at 63%. While I appreciate the thought that Blount's size is supposed to make him a premier short yardage back, the reality just isn't there.

When inside the opponents 5 yard line, where anything less than a touchdown for the team should be considered a disappointment, one running back has shone, while the other has been a flop:

Oh. Yes, I included Tom Brady in those numbers to make a point. Somehow Blount managed to turn lemonade back into lemons. Ridley has been money in the end zone, with Bolden being a not-so-sneaky extremely solid second option. Blount? Averaging negative one yard per carry.

And looking at downs with <2 yards to paydirt?

Bolden's been the most effective of any of the backs, although that likely has to do with the opposition's personnel when Bolden's on the field (pass defense), but maybe Bolden should be the third down back no matter what.

But still, when comparing just Ridley and Blount, it's not close in the short yardage space. Ridley's pedestrian 50% conversion rate glows in comparison to Blount's 33% rate. Whether it's the red zone or between the 20s, Ridley plays as a much better option.

I said that I would find a place for Blount in this offense, and I wasn't joking. Blount is the team's best closer. 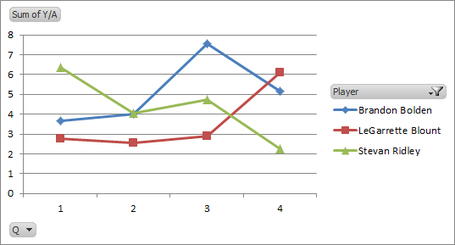 The graph shows the running back's yards per carry, based upon the quarter. While Ridley shines in the first quarter, he regresses back to the mean in the straddle quarters. Meanwhile, Bolden explodes in the 3rd quarter (again, Bolden could sneaky be the best running back option right now), while Ridley continues a strong average.

Through three quarters, Blount doesn't average above 3 yards per carry. For whatever reason, the 4th quarter brings out the beast in Blount and he more than doubles his output with a 6.12 YPC clip and has exactly 60% of his season's yardage in the final box. Ridley, on the other hand, falls down to a 2.26 YPC rate, which is lower than anything that Blount averages in any quarter.

So the Patriots do have a spot for Blount on the offense. He's the team's closer. He can barrel over worn down defenders and he can churn out the needed yards. Ridley has the burst and skill set to thrive in the early game and can turn over the car keys to Blount and his absurd YPC rate in the fourth.

In a perfect vacuum, the Patriots would play Ridley in the first, a combination of Ridley and Bolden in the second, Bolden in the third, and then Blount in the fourth, but that's not how football works. The Patriots should continue to operate out of the committee in order to keep defenses off balance, but serious considerations for snap distribution must be made.

Ridley deserves more snaps in the first half and in short yardage. Blount deserves his time to knock out the opposition in the fourth. Bolden can keep Bolden on.

This shouldn't even be a debate. These are just the basic facts.