Better late than never- let's see what people were saying about the game.

A quarter of the season down and I've figured it all out. Rookie wide receiver Kenbrell Thompkins' career is already on a track that he will forever be unable to shake.

Thompkins is going to have Pierre Garcon's production arc, while playing Brandon Lloyd's game, while winning the hearts of the fans like Deion Branch. Book it.

Let's start with Pierre Garcon. You might remember him as the former Indianapolis Colt with a penchant for dropping the ball- and you'd be absolutely correct. When he was with the Colts from 2008 to 2011, he was targeted 33 times against the Patriots (second most behind Reggie Wayne), but only managed to pull down 17 of them, for an anemic 51.5% catch rate. To be fair, he racked up 262 yards and 3 touchdowns on those passes, but that catch rate had to be painful.

And still his production held slightly better expected production than Reggie Wayne against the Patriots. For every target thrown towards Wayne, the Colts averaged 7.83 yards/attempt. Garcon? 7.94. Is that to say Garcon is just as good as a receiver as Wayne? Heck no, and I'd go to Wayne on crucial downs every time. I am saying that there was value in throwing to Garcon because for every drop or misconnection, he'd make a catch and break open the game.

Which is exactly what Kenbrell Thompkins is providing right now.

Oh, and for Garcon's catch rate? Starting with his sophomore year, his rates have been 51.6, 56.3, 52.2, [Signed to the Redskins] 65.7, 65.9. After a rough starting period, his catch rate his now a solid 2/3, which, I'll have you know is exactly the range of former-Patriots receivers Aaron Hernandez and Wes Welker.

Give Thompkins some time to iron out his drops and work on his concentration and transition to the NFL. The Patriots will stick around and reap the rewards.

As for the Lloyd connection, it could totally just be fitting a square peg into a round hole, but Patriots offensive coordinator Josh McDaniels seems keen on having Thompkins playing a similar role to last year's target #3 Brandon Lloyd. And why wouldn't he? Thompkins might not have the best of concentration, but he'll lay out for every target and he'll fight for the ball. And, most importantly, Brady trusts him. 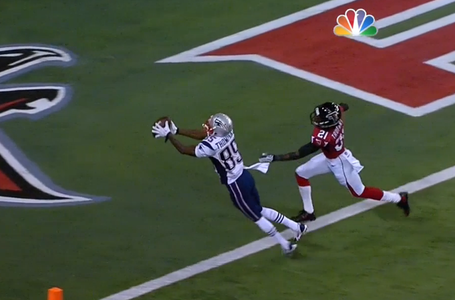 And then there's the hearts of the fans. Really brief. Had to appreciate him sticking by fellow rookie wide receiver Aaron Dobson after Dobson was crumpled in the end zone and writhing in pain. Thompkins took a knee and looked concerned for the well-being of his fellow player. Not concerned, like he'd be nervous for the same thing to happen to himself. No. He looked concerned, added fire to his heart, and wanted to play the rest of the game for the honor of his friend. And damn it, he did. 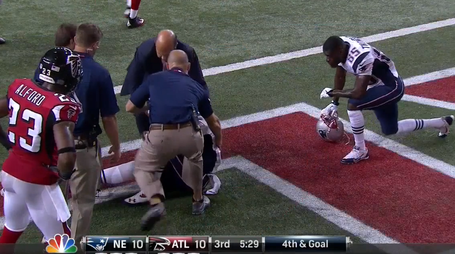 On the very next Patriots drive, the offense was pinned back in their own zone on a 3rd and 19, up only 13-10. Someone had to make a play and they had to move the chains. Thompkins stepped up and in a big way. 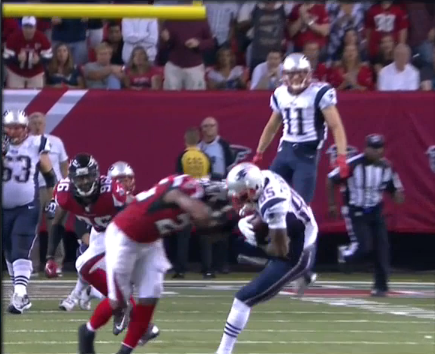 Middle of the field, coming down with the ball and squaring up against a bowling ball safety leading with the crown of his helmet? No problem. Thompkins came up with the 26 yard grab and allowed the Patriots tack on an extra 15 for the personal foul.

The Patriots scored a touchdown on the very next play.

There's no question that there's going to be some exceptional growing pains surrounding Thompkins. I just think the pain will be worth it as he wins the hearts of the fans, the minds of the coaches, and the bodies of the players on the field.

And on to the tweeters:

Buchanan and Vellano in on that big third-down sack. Just as we expected in training camp

We won't go too much into the loss of Wilfork. Stats are already coming out saying that when Wilfork was off the field, the Patriots had numbers that projected to the worst run defense in the league. Now I don't have the numbers on hand, but I feel like that concern might be a little overblown. The Patriots often take Wilfork off the field on obvious passing downs- so wouldn't it make sense that the Patriots would be in a lighter defensive front and would allow for the opposing offense to catch them off-guard and smash them for a big gain?

As for the pass rush, Wilfork's biggest value was that he was a space eater. He could hold the point and he could occupy multiple blockers and allow the other players on the field to make the plays. While this makes the defense a little more versatile- Wilfork would be sitting at the point in case of a scramble and to open up windows in the pocket for the pass rush- not having Wilfork forces the Patriots to put two defensive tackles with pass rushing skills on the line. It'll take a while to evaluate, but that might make the Patriots pass rush in the base four-man fronts even more dangerous (albeit more susceptible to draw plays).

Without Wilfork, the Patriots played some three-man fronts with both Chandler Jones and Michael Buchanan holding the defensive end spots, with Tommy Kelly as the nose tackle. Jones (6'5, 270) and Buchanan (6'5, 260) might not have the bulk to hold the points at defensive end, but on clear, 100% passing downs, their combination can generate some serious pressure. Buchanan's looking like a steal and with Rob Ninkovich locked up, it looks like the Patriots defensive end position is prepared for the long haul.

Yes, Welker's career high for touchdowns is 9, and yes, Manning is totally going to smash it. But let's be serious: the Patriots aren't missing Welker at all. That's not to say that Brady isn't missing his best friend- that's completely possible and likely- but the Patriots have been more than able to fill his vacant shoes.

Welker's 26 receptions on 36 attempts is a solid 72.2% catch rate, outpacing his three year average of 69.1% with the Patriots. His current 7.39 yards/attempt is down from his 7.97 Y/A with the Patriots. Edelman, playing the same role, has 34 receptions on 43 attempts, or a 79.1% catch rate- a 10% improvement over Welker in the slot. And while his 7.42 Y/A isn't the same as Welker's, he's been playing without Rob Gronkowski or Aaron Hernandez or Brandon Lloyd. Once Gronk and Danny Amendola return, I wouldn't be surprised to see Edelman's production spike upwards as well.

And for the season? Edelman's on pace for 136 receptions on 172 attempts (probably unsustainable), for 1276 yards and 8 touchdowns. That just so happens to be right around Welker's average production in New England of 112 receptinos, 1246 yards, and 6 TDs.

So feel free to miss Welker all you want. The offense has been producing the same amount with his replacement.

If the replay system was down in Foxboro, the national media would go triple Mangini on the Hoodie.

Fact. No way would people be fine if this had happened at The Razor. I understand why letting the play stand was the right call since it had been made, but holy cow, the NFL shouldn't let this happen. And Belichick definitely wasn't happy about it. He let loose in Belichick fashion on WEEI:

In that situation, you’re just playing without replay...That’s what it is, but I mean, the fact we have however many zillions of dollars committed to this system and it doesn't work, that’s a whole another discussion. That’s a question that really should be asked to the league office and the officials, because I don’t have a good answer for it.

You can just feel the disdain dripping from his mouth. He knows the Patriots defense was jobbed out of a box score that showed how good they actually were. He knows that he can now tell his team to work harder and not be satisfied with having a lead because any team can come back to win. He knows that he's absolutely 100% right and that no one would question if he went on a tirade about the situation.

But he didn't. He stayed Belichick and kept his cool after the fact. Still- how would the circus be if this incident was at home?

Sudfeld finally did something to impact a game #PatriotsTalk

Speaking of letting teams back into the game. Sudfeld. C'mon brotha. You were supposed to be the chosen one. Sudfeld to Dudfeld to Ughfeld all in the first quarter of the season. Maybe he can turn it around when Gronk returns, but when Matthew Mulligan's stat line of 1 reception for 1 yard- nevermind the touchdown that came with it- far surpasses any of your output on the season (Brady's 2 picks on the season were passes thrown his way, botched onside kick, no receptions at all)...well, maybe he needs a Mulligan of his own.

As for the future of the position, I don't think it would be a shock to anyone if the Patriots drafted another tight end in the first or second day of the next draft. The Patriots need depth and Sudfeld and Mulligan aren't going to cut it.

Major props to Michael Hoomanawanui and James Develin, though, for putting in a very solid effort.

Mr. Talib, in the conservatory, with the candlestick.

Does Talib get an island now?

Aqib Talib has been thrown at eight times tonight. He has allowed one catch for one yard.

Talib has been the team MVP through the first quarter of the season. He has 7 passes defended (second in the league), 4 of them picks, and he's been lockdown on some of the top receivers in the league. And by league, I mean he kind of skated by in the first two weeks, only getting targeted once against the Bills (touchdown to Robert Woods) while he shadowed the #2 guy on the field, and he matched up against whatever wide receiver the Jets could manage to find on their bench (5 passes, 2 completions, 2 interceptions).

The next week against Tampa? Talib shadowed Vincent Jackson, a legitimate top 10 receiver in the league, for the whole game and allowed only three receptions on six passes- and even managed to snag a pick while he was out there. Once VJax was hurt, Talib took over on Mike Williams and just removed him from the game.

This week, according to Pro Football Focus, Talib was targeted 7 times for 0 receptions. That one pass difference from Oliver Thomas' stat went for 1 yard and it wasn't in man coverage. Sure, he had that pass interference call, but wow, what a day. Talib shut down Roddy White (since 2007, #7 in TDs, #5 in receptions, #3 in yards) and Julio Jones (a current top 3 receiver in the league).

Through four games, Talib leads the league in passer completion percentage (30%), and is second in passer rating (24.8). That just doesn't happen unless you're one of the best corners in the league. And right now, he's playing better than any other.

It's likely that Talib is playing out of the Patriots price range, but if he can keep this up, he might be able to leave New England with some hardware.

And that's when Belichick knows that the team escaped with something. He flashed the same smile after holding on to beat the Jets. It may be all the emotion that he'll give us, outside of an awkward fist pump, but it's enough.

Belichick knows the Patriots had a great win. And he's ready for the next one. Maybe this time, the replay will work.

On to the Bengals.