As the 4-0 New England Patriots prepare to face off against the 2-2 Cincinnati Bengals, they held practice this morning in Foxboro, Massachusetts. There were some newcomers on the practice field, such as wide receiver Austin Collie, and special teamer Matthew Slater returned to practice for the first time this week.

Special teams captain Matthew Slater, who broke his wrist in week two against the Jets, was back at practice today with the New England Patriots. Reports say that he was still wearing a cast around his broken wrist, but this is a sign that he is progressing forward.

The special teams have taken a little bit of a hit without the star gunner out on the field, but it would be quite a surprise if he suited up and played on Sunday against the Cincinnati Bengals. With Slater on the field today, it appears that he could at least be back as early as next week against the New Orleans Saints.

Stevan Ridley missed practice for the third straight day this week, with either a minor knee or thigh injury. It's rare that a player misses three days of practice and plays on Sunday, but it's possible that this rest only increases his chances of playing against the Bengals. However, his bags were not packed after practice, a sign that he will not be traveling with the team tomorrow.

If Ridley is inactive, expect increased snaps for LeGarrette Blount. Normally Blount and Ridley alternate each series, with Blount taking almost the entire load towards the end of games, but if Ridley is out, Blount should play at least 75 percent of the snaps.

Amendola and Gronk's bags are packed

After practice, wide receiver Danny Amendola said to reporters that he had a good day and was "looking forward to Sunday." Read into that any way you want to, but I think that is a sign that he will return against Cincy. His bags were packed, as were Rob Gronkowski's. Of course, both could end up not traveling tomorrow.

If Amendola returns, that will present many problems for the Bengals, who are playing with a banged up secondary. Both Julian Edelman and Danny Amendola are incredibly difficult to cover, and once Rob Gronkowski returns, no one will be able to be double-teamed. Pick your poison, defense.

Could Austin Collie play on Sunday?

Bill Belichick wasn't even asked if Collie would play on Sunday during his Friday press conference, he was only asked if his transition from the Indianapolis Colts' system to New England's would make things easier on him.

Belichick was open with his thoughts and said, "Yeah, I don't know - he seems like a pretty smart guy, so I think probably what we're doing are things he's done before, just had different ways of calling it or terminology or that type of thing. We'll see."

He then expounded on his initial statement, which is unusual, and opened the door for him to play this Sunday. "We've had him on the field for one day, so we'll see how it goes today. We'll kind of recall where he is and see where we're at tomorrow and make a decision. I don't know. "

Collie: "[Football talent] is a gift I've been given and I want to maximize that gift. I feel like I have a lot more left to give."

Interesting. When healthy, Austin Collie is a versatile player that does a good job in the slot and outside. He had some terrific seasons with Peyton Manning, though chronic concussions have held him back from blossoming as a star wide receiver. If he does play this week, everyone will be rooting for him to succeed, and not just New England Patriots fans.

In with Collins, out with Spikes?

I have always thought that Rob Ninkovich would get his contract extension before Brandon Spikes, and he did. To be honest, I have always thought that Spikes will jet out of town to a team closer to his home in 2014 as well. Spikes, though he is one of my favorite players, is an expendable one. As passing becomes more prevalent in the NFL, the need for run stuffing beasts like Spikes becomes less and less important.

Last week rookie linebacker Jamie Collins played more snaps than the veteran, Brandon Spikes. As Belichick said today, who plays has more to do with what the other team is doing.

"A lot of our defensive game plan depends on what matchups we have and what our calls are, what personnel they use and so forth, and we don't have a lot of control over that at times like what group they're going to have on the field."

Exactly. The Falcons run a lot of three-wide receiver sets, and Tony Gonzalez needs a coverage linebacker (or two of them) on him. Spikes is weak in coverage, so his positives in the run game weren't useful. 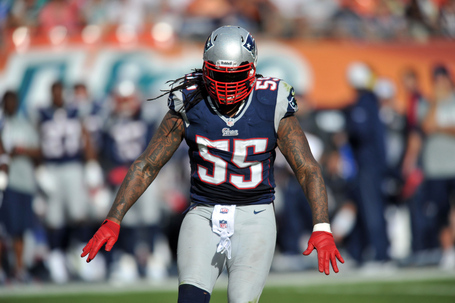 With Vince Wilfork likely out for the rest of the season, one would expect Spikes to automatically receive more snaps this year, but that is not necessarily the case. This week, for example, the Bengals will employ many two-tight end sets with Jermaine Gresham and Tyler Eifert. Both players are pass catching threats, so it would serve better for the Patriots to put a Jamie Collins or Dont'a Hightower on the field over Brandon Spikes.

The snaps will come for Spikes when they face off against teams that run a lot, but how often will that occur? We're seeing the NFL evolve before our eyes, and a player like Brandon Spikes might not be worth the money that he probably deserves. As we move forward this season, expect to see more and more of the young and talented Jamie Collins.

BB gets a bad reputation around the league for giving bad, unthoughtful, and occasionally rude answers to the media, but I have been watching or listening to each and every one of his press conferences the past ten years and have learned quite a lot about football because of it.

Here and there Belichick gives a better answer than any reporter could ask for. Sometimes he goes above and beyond with his thoughts, giving you a deep insight into the NFL's great history. Today was one of those days when he was asked about his thoughts on being the longest tenured coach in the NFL.

"Yeah, I feel a loyalty to all the people that are in the organization. And I'm not saying I'm great or anything, that's not the point. The point is when you're the head coach; there are a lot of people that are dependent on you. Having been an assistant coach for a long time and been the son of an assistant coach for a long time, you know that your future is, to a certain degree, tied to the head coach."

"I mean, I feel a loyalty to them and I think they also feel a loyalty to me along those same lines. I mean, it's a two-way street. I know everybody has got to take care of themselves and their own needs and all that. I do have a lot of loyalty and respect for the people who work for me and I want to try to continue to provide a good working environment for them to be successful, for us to be successful, so that we can all benefit from that."

"So yeah, I would say that's definitely important to me and that's the way I was brought up. I mean, when you're an assistant coach and the head coach isn't there, you're probably not going to be there either. That's just the way it is. I learned that a long time ago."