Rules: Breaking Down the Final Play

Ya either like it or you're a Patriots fan. Here's what happened.

Share All sharing options for: Rules: Breaking Down the Final Play

This will get beaten to death. This is why the call is horrible, terrible, no good, but reasonable given the circumstances. I don't like it, but hopefully you can see why it was called. 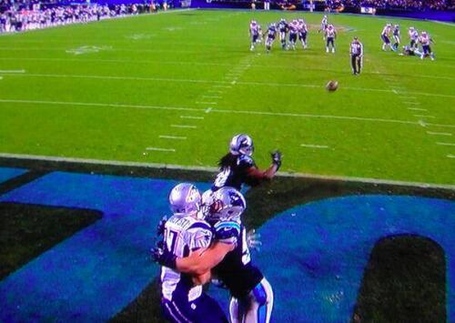 Contact Beyond Five-Yard Zone. Beyond the five-yard zone, if the player who receives the snap remains in the pocket with the ball, a defender may use his hands or arms only to defend or protect himself against impending contact caused by a receiver. If the receiver attempts to evade the defender, the defender cannot initiate contact that redirects, restricts, or impedes the receiver in any way.

Verdict: Gronk was held while Tom Brady no longer held the ball in the pocket. Therefore, illegal contact cannot be called.

What about defensive holding? That's a hold if I've ever seen one, right?

Defensive Holding. It is defensive holding if a player grasps an eligible offensive player (or his jersey) with his hands, or extends an arm or arms to cut off or encircle him.

Fits the fill, right? In every way, shape, and form?

Rule 8, Section 4, Article 7, however rains on the parade:

If the quarterback or the receiver of the snap demonstrates no further intention to pass the ball (i.e., hands off or pitches the ball to another player, throws a forward or backward pass, loses possession of the ball by a muff that touches the ground or a fumble, or if he is tackled) the restrictions on the defensive team prohibiting illegal contact, an illegal cut block, or defensive holding against an offensive receiver will end.

Which means that once the quarterback throws the ball, the restrictions stopping defensive holding ends.

Which leads to pass interference:

(a) Contact by a player who is not playing the ball that restricts the opponent’s opportunity to make the catch.

(c) Grabbing an opponent’s arm(s) in such a manner that restricts his opportunity to catch a pass.

(d) Extending an arm across the body of an opponent, thus restricting his ability to catch a pass, and regardless of whether the player committing such act is playing the ball.

(e) Cutting off the path of an opponent by making contact with him, without playing the ball.

So it's clear that Panthers linebacker Luke Kuechly violated the above four rulings on pass interference, at the very least.

(c) Contact that would normally be considered pass interference, but the pass is clearly uncatchable by the involved players.

Was it clearly uncatchable? I don't think so. But with all the moving parts, it's obvious the refs missed some aspects of the play.

The back judge closest to the play threw the flag, so I think he'd have a fairly good idea. Add in the fact that Gronkowski started to get mugged at the rough location the ball landed, and you have my thought on whether or not that was catchable.

But that's the discussion and that's the call that the refs had to make at the time. That's what their conference was at the end of the game. They determined that it was uncatchable and that's why they ended the game.

They should have had a better explanation of why they picked up the flag, especially in such an emotional game, and they owe it to Bill Belichick to at least admit that they could have handled it in a much better fashion.

But there it is.

The calls couldn't be illegal contact or defensive holding. The only possible call was defensive pass interference and the refs deemed it uncatchable.

The end. On to the next one.