Julian Edelman Ask Me Anything Highlights

Share All sharing options for: Julian Edelman Ask Me Anything Highlights

New England Patriots wide receiver and punt returner Julian Edelman held an Ask Me Anything (AMA) on Reddit this afternoon. If you aren't familiar with what an AMA is, a celebrity can provide a "proof picture" and allow commenters to ask any question they want. Of course, not all questions have to be responded to, but Edelman followed through with some laughs. If you'd like to read the entire conversation, click here for a link, but here are some of the highlights:

Q: "Do you look at a guy like Tim Tebow, who refuses to adapt to his skill set and play a different position and think to yourself, 'Wow. I am a lot more handsome than that guy.'"
JE: "i lol'ed"

Q: "What has laid the hardest tackle on you so far?"
JE: "brian dawkins or ray ray...thankfully he's talking on sundays much respect to both of em"

Q: "What's your favorite kind of penguin?"
JE: "I'm normally an emporer penguin guy but lately I've been partial to the chinstrap penguin"

Q: "What has been your favorite part about being a player in the NFL?"
JE: "you get to compete at the highest level of that crazy dream you had growing up. it's amazing"

Q: "What would you say your favorite thing about being a Patriot has been so far?"
JE: "its always fun to win ballgames and this franchise has been consistent for a decade...and its a fun cast of characters in the locker room"

Q: "Has anyone ever told you that you look a lot like the WWE wrestler Fandango?" 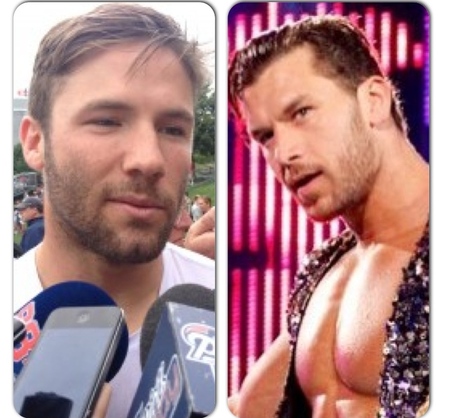