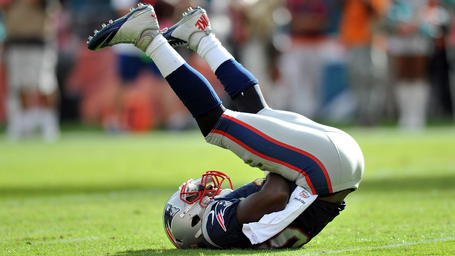 ISN - A Patriots Defensive Back in his natural position.

poindexterregan - Brady: That's not what I meant when I said, "Give me a bigger target"!

Greg Knopping - Hey Slater! That's not what we mean by deep threat!

cruelangelT - Slater: Gronk! I told you to cover your nose when you sneeze...Hey, where is Woodhead?

New Century Silver - Unfortunately for him, Slater is choosen as a test target in the NFL's attempt determine whether Mark Sanchez really does home in on butts.

FlaxonWaxon - BB : and thats why your not a wide receiver, Tom : yep he puts the special in special teams

Oughat - The hot air spewing out of the Jets camp this offseason has been so strong it has reportedly started knocking people off their feet as far north as Foxboro.

Greg Knopping - Hey Slater! That's not what we mean by Defensive Back Position!

The rules are simple:

1) Write a funny caption for the picture, if you can't think of one, then you can still play (keep reading).

2) If you like any of the captions, Recommend them. Even if you wrote one of your own. It is better to give than receive.

3) We'll give a shout out to the top three most Rec'd captions in the next contest, along with a new picture.

4) Please, please, please, remember this is just for fun and don't create other screen names just to recommend yourself. If you're that funny, you'll be recognized.