The 2013 NFL Draft has a number of large receivers that New England Patriots fans have been clamoring for the past few seasons. There are receivers that might fit that mold such as Tennessee's Cordarrelle Patterson and Justin Hunter, California's Keenan Allen, and Tennessee Tech's Da'Rick Rogers. Today a look will be taken at the receiver that arguably fits the Patriots the most, DeAndre Hopkins from Clemson.

DeAndre Hopkins constantly finds open spots on the field before and after the catch. He is a sensational route-runner who uses his top-notch footwork to get open. After the catch, he has a remarkable ability to find open space to get more yards. He's a fighter and never seems to give up until the whistle is blown. Hopkins is a clutch player that makes plays in big games. With his long arms, he has a large catch radius so he's able to extend and make difficult catches. He's been consistent throughout his college career and took on a leadership his junior year.

Hopkins isn't exactly a burner, running only a 4.57 40-time at the combine. He won't be able to consistently take the top off the defense, though he does have a second gear when the ball is in the air. It would do him some good if he put on some more muscle so he is better able to beat the press when facing NFL-caliber cornerbacks. Despite his huge catch radius, he'll sometimes let the ball come to his body instead of catching it with just his hands. Drops aren't a big problem but he has dropped balls due to turning his head and not seeing the ball in. He's also not an effective blocker.

DeAndre "Nuk" Hopkins absolutely dominated in his junior year at Clemson. He had 82 catches for 1,405 yards and 18 touchdowns. Hopkins' consistency is impressive since he was able to make an impact in every game last season. His best performance came in his final game as a college athlete, versus LSU at the Chick-Fil-A Bowl, where he had 13 catches for 191 yards with two touchdowns.

Against LSU's 12th ranked defense, allowing only 17.54 points per game, Hopkins showed off all his tools for NFL scouts to see. He helped lead Clemson to a 25-24 victory with timely plays throughout the game. (Make sure to take notice throughout the article for the hyperlinks, timestamps, "click here" mentions for video clip references of Hopkins.)

When you watch tape of Hopkins, the first thing you notice is his ability to make plays after the catch. He isn't the shiftiest player, but he certainly has a nose for finding open space. At the 1:09 and 3:09 marks of the video above are two great instances of that. For some other pieces of footage, click here to see him make a move Aaron Hernandez seems to make on a weekly basis, and click here to see him drive hard to assure he picked up a first down. He consistently shows exceptional heart and determination to get extra yardage. What's most exciting is his ability to be quick in his decisions. It seems like every time he catches the ball, he has an idea on what he's going to do once he has the catch.

Hopkins' ability to get extra yardage is admirable, but it sometimes gets him into trouble with dropped passes. Because of his eagerness to move the ball up the field, he occasionally takes his eyes off passes before completely bringing it in. At the 3:31 mark of the video above, DeAndre doesn't look the ball in the whole way in and instead begins to look up field, resulting in a drop.

It might appear that DeAndre "hears footsteps" and is afraid to get hit, but it's more likely that he's just looking to make a move to pick up more yardage. At the 4:11 point of the LSU video is an example of a catch where he looks ahead before he completes the catch, but holds on.

That clip also shows his outstanding footwork and ability to read coverages to find open parts of the field. At 20 years old, Hopkins has shown route-running talents beyond his years. At the 35-second mark of the clip above, he runs an insane out route and then has to fully extend to make the catch. His ability to stop on a dime and then accelerate is excellent for a player of his size. He shows great body control by staying balanced on each and every one of his cuts.

DeAndre Hopkins is not only pristine route runner, but a smart one too. At the 19-second mark of the clip above he runs a nice route to create space against the safety. During Clemson's game winning drive, DeAndre once again showed his ability to not only make a clutch catch, but his knowledge of the situation. With only 1:22 to go on 4th and 16, he ran a quick route to get to an open part of the field. Of course, he made a sensational catch, but the route to get to the spot highlighted his acceleration and ability to read coverages, which is even more impressive.

In addition to his route running, when the ball is in the air he tends to go up and fight for it. In this clip versus Georgia Tech and this video versus South Carolina, he makes two incredible catches in tight coverage. Hopkins consistently shows the ability to make hard catches in traffic. At the 1:49 point of the LSU clip, he does a beautiful job turning his body, going up high and making a sideline grab. On one play he shows his aggressiveness and body control. Even when the quarterback is under pressure, he has shown the ability to make the right play in coming back to the line of scrimmage. That can be seen in this clip against Georgia Tech. 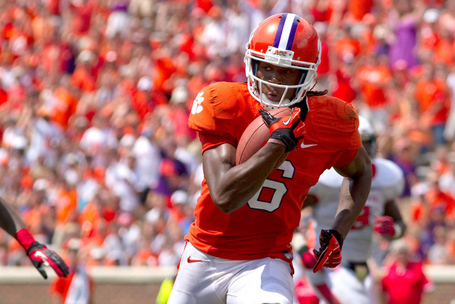 DeAndre Hopkins truly doesn't have a good comparison on the New England Patriots. The best there is could be Aaron Hernandez, only because of the ability to get yards after catch they both share. Hopkins makes a lot of similar moves that Aaron does. However, Hopkins is a completely different player, which is why Patriots fans have longed for a guy like him for so long.

Around the NFL, Roddy White, Stevie Johnson or Reggie Wayne seem like quite fair comparisons. Like Roddy White, Hopkins can stretch the field but is also very physical when the ball in his hands. However, Hopkins comes into the league as a more refined route-runner. White was very raw coming out of Alabama-Birmingham, which is why a comparison to Reggie Wayne or Stevie Johnson might be more appropriate.

Like Johnson and Wayne, Hopkins runs pristine routes at all level of the field. Utilizing elite footwork, Wayne has had a successful 13-year career. Johnson hasn't had nearly as much success but much of that is due to the team and his quarterbacks. Both Wayne and Johnson both have a special ability to find pockets in the opposing defenses, and Hopkins shares that skill.

DeAndre Hopkins would be an immediate fit and a potential first year starter with the team. With the loss of Brandon Lloyd and Emmanuel Sanders staying with Pittsburgh, the Patriots lack a true starting X-receiver. While the team signed both Donald Jones and Mike Jenkins, they can't be totally counted on as starters.

With Hopkins route-running ability and experience, he is one of the more polished receivers in this draft. He can arguably considered one of the safer selections in the draft but still has a lot more upside due to his skillset. He could be the perfect number one receiver to pair with Tom Brady.

And let's just make this clear, DeAndre Hopkins is everything that Brandon Lloyd isn't. Lloyd had a better year than a lot of people want to give him credit for, but he did fall to the turf after virtually every single catch he made. Hopkins rarely does that and instead looks to go up the field. It's a special ability and is no doubt one of the intangibles that could make him an exceptional receiver in this league.

All signs point to DeAndre Hopkins being a mature individual despite only being 20 years old. He took on a leadership role his junior year and New England has a long track record of drafting team captains. While he wasn't a captain, he would've been his senior year. A lot of his maturity might have to do with some tragedies he endured growing up.

Considering how deep this draft is at wide receiver, its possible that New England would prefer to draft another position or trade out of the first round. Hopkins will not fall to the second round, so he isn't an option with a trade down either.

If the Patriots don't feel he is ready to jump into a role right away, he does have some value on special teams. During his freshman and sophomore year he spent some time returning kicks and punts.

DeAndre Hopkins would no doubt be one of the more safe receiver picks that the New England Patriots have made in their history and if they do decide to go receiver in round one, he might be the guy.