Teams looking for value in the second or third round should look no further than Tyrann Mathieu, the troubled but talented star cornerback from LSU. Mathieu was once considered a potential first round draft pick but was suspended from school after failing drug tests and he got arrested for possession of marijuana. Despite the concerns, Mathieu will get the chance to redeem himself after he is drafted this week in the 2013 NFL Draft.

Tyrann Mathieu is a true playmaker that has the ability to score touchdowns on both special teams and defense. On defense he has experience playing both corner and safety. Mathieu's zone coverage is very good considering he is such an instinctual player. Despite being 5'9", he has the ability to compete for jump balls. He makes up for his height with a highly aggressive, tenacious, never-give-up type of attitude. LSU often blitzed him and he showed fearlessness in doing so. He's like a missile when he's pursuing the ball carrier. Mathieu never stops until the whistle is blown, always trying to rip the ball from the carrier. Tyrann's natural instincts work for his benefit, as he seems to have a good idea of what is going to happen before it does, often beating a player to a spot. As a punt returner, he has elite potential due to his incredible burst that he shows when changing directions. Mathieu's nonstop motor shows in each and every game he plays. Mathieu has all the positive intangibles that you would look for in a player and is a highlight waiting to happen.

Unlike his zone coverage, Mathieu is very inconsistent in man coverage. He especially struggles in press coverage due to his lack of strength. He is not a very disciplined player due to the fact he relies mostly on his instincts. Because of his height, he will have a harder time against the larger receivers in the NFL. In run defense, despite the positives, he still is easily blocked due to his lack of size and strength. He also misses tackles at times since he always goes for the strip. The obvious concern is his character, considering he was suspended by LSU, failed over ten drug tests and was arrested for marijuana possession. Considering he hasn't played football in over a year, durability and conditioning will be a concern, though he never had issues with it in the past.

(Make sure to take notice throughout the article for the hyperlinks, timestamps and "click here" notices for plenty of video clip references of Tyrann Mathieu.)

Tyrann "Honey Badger" Mathieu had loads of success at LSU, finishing fifth in Heisman voting in 2011. In 26 collegiate games, he had 133 total tackles, 16 for loss, six sacks, 11 forced fumbles, six fumble recoveries, four interceptions, 11 passes defended and two touchdowns. He was also one of the top punt returners in the nation, averaging 17.2 yards per return with two touchdowns in 2011.

Mathieu has a unique ability to make huge, clutch, timely plays. Whether it's a forced fumble, a punt return, an interception, or a sack, Mathieu seemed to make the highlight reel for LSU each and every week. If a team is in need of a playmaker, Tyrann could be the guy because his intangibles are off the charts. As his former coach Les Miles said in a 2011 interview, "I think I've seen guys make plays like this every year, it's just Tyrann Mathieu seems to make them in every game himself."

Like Les Miles said, Tyrann Mathieu made big plays every single game. He has intangibles unlike any other player in the draft. Mathieu has a nose for the ball and is always a threat to create a turnover when he is on the field. In his sophomore season at LSU, Mathieu had a touchdown one every three games. Statistics like that are out of this world for a defensive player. It's not that these touchdowns fall into his hands either; he creates the moment, either with a punt return or a forced fumble.

There is really no argument amongst any scouts that his instincts and recognition skills are elite but there are other question marks surrounding him. Everyone knows about Mathieu's problems at LSU; he was kicked off the football team for failing multiple drug tests and was arrested for possession of marijuana. Tyrann's draft stock took a hit, but he has so far proven that he has moved past his problems, by answering well to questions at the NFL combine and passing his drug test. He went to rehab and seems to be prepared to make a name for himself in the NFL.

In terms of coverage skills, Tyrann Mathieu has trouble with his technique and size when playing man-to-man or press coverage. Mathieu is not very strong and will have a hard time covering big receivers or tight ends in the NFL. Check out this clip of Da'Rick Rogers punishing Mathieu for trying to press him.

While Mathieu can compete when going for a jump ball, he is limited considering his height. However, he is very good tracking the ball when it's in the air, timing his jumps perfectly, it's just a matter of being able to get to the ball. In this clip, he does. His effort and competitive spirit shows since he plays bigger than his actual size.

Mathieu's movements are sometimes not so fluid as he relies on his instincts to make a play instead of technique, like you can see in this clip against Alabama and this one against Tennessee. At times his stride is too long and his hip movement can be relatively stiff.

Tyrann Mathieu has shown the ability to make a lot of good plays when playing zone coverage. He does bounce around a lot and still lacks technique, but his instincts suit him a lot better in zone. His instincts allow him to have incredible field awareness when playing zone, which shows here and here in this game against Georgia. The second clip is man coverage but it's still a perfect example of his ability to make the read when he is in open space like a player would be in zone coverage. Mathieu is a smart player and tends to know where the ball is going to be. Despite not having amazing straight-line speed, he is very agile in small spaces. In this clip against West Virginia, he shows off that agility by closing quickly.

Mathieu's aggressive could lead him to potentially bite on pump fakes against smarter quarterbacks. In order to get the opportunity to be a starting cornerback, he will have to improve his decision making by taking less risks. Mathieu's zone coverage is pretty good but he will have to improve on his man coverage in order to be a starting outside corner at the next level. At the moment he is better suited for work in nickel or dime packages or even at safety. 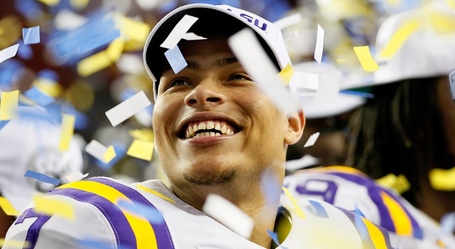 He always attempts to force turnovers by grabbing at the ball. At the 2:51 and 4:19 marks of this clip you can see him rip at the ball, forcing a fumble. However, there are plenty of instances where he does go for a strip and fails to make the tackle, like at the 3:29 mark of this video. Tyrann can get himself into trouble because of his technique but there is a risk versus reward factor that teams must account for if they want him to continue to force turnovers at this rate.

As a punt returner, Tyrann Mathieu was very accomplished as the successor to Patrick Peterson, averaging 17.2 yards per return, taking two to the house. At the 1:46 mark here and the 2:22 mark here, you can see both of his returns for a touchdown. In a game versus Georgia, at the 4:00 mark, he had one of his more impressive returns. While he didn't score, he showed off his incredible instincts, acceleration and change of direction ability. One potential negative is his over aggressiveness in grabbing bouncing punts, like in this clip here. Mathieu will have no trouble converting his punt returning skills to the next level.

Besides his success as a punt returner, Mathieu has had played on both kickoff and punt teams as a gunner. Tyrann Mathieu's aggressiveness yields well for him in this role. He would immediately improve any teams special teams unit either as a returner or a gunner.

There are some questions on whether or not he can take the pounding from a long NFL season. Considering his small 5'9" frame, there are these concerns, especially after taking a full year off of football. However, he never had issues in the SEC as far as his conditioning.

Forcing fumbles is an art form, not luck. While Mathieu isn't a physical coverage cornerback like Charles Tillman, his ability to force fumbles is very similar. Tillman is a vulture for the ball, forcing 39 fumbles in his ten-year career, with a career high ten last season. Mathieu is very much the same with his nose for the ball. Mathieu waits for the right moment to strike and takes it.

Mathieu has potential to be a Devin Hester type of punt returner. Coming into the NFL, Mathieu is far superior to Hester as a cornerback but the comparison is fair for their punt returning abilities. Mathieu doesn't have the breakaway speed that Hester has but they are just as shifty and explosive in space.

As for former Patriots, there really isn't a perfect player to compare him to. In terms of his ability to jump routes and make plays on the ball, he is comparable to Asante Samuel. But Asante was more advanced coming into the league with his coverage than Mathieu will be.

The Patriots need a true playmaker on defense despite having some fantastic players such as Vince Wilfork and Jerod Mayo. Since Asante Samuel left the team in 2008, the team hasn't had a player that creates turnovers at a high frequency. For a second or third round draft, Mathieu has the tools to be fit that need.

Put aside Mathieu's character question marks and he is easily a late first or early second round pick. To get that value late in the second or the third round would be ideal. New England has shown that they aren't afraid to take risks on a player with a history smoking marijuana-drafting Aaron Hernandez in fourth round of the 2010 draft-so it wouldn't be a surprise if Mathieu found himself in Foxboro.

Tyrann does have his issues in man-to-man coverage but New England plays in zone quite often, which suits Tyrann Mathieu well. He could be used in sub-packages that involve a corner or safety blitz considering his experience and success doing that at LSU; six sacks in only two seasons is very impressive for a corner. Every cornerback in this draft has question marks--whether it's zone or man coverage--but Matthieu's extra baggage is what hurts his value even more.

Mathieu's versatility would also be a positive for the team. At LSU, he excelled at gunner on both kick and punt teams and of course was an amazing punt returner. While the team has Julian Edelman and Leon Washington as punt returners, neither player may be a long-term solution considering they are signed to one-year deals.

Vote on the poll below and make sure to comment to get your thoughts across Tyrann Mathieu.