The Patriots have a ton of potential at wide receiver, but little proven value. Who do you think will step up their game?

That's been the story of the Patriots offense every season since they lost Randy Moss to "Randy being Randy." In 2010, the Patriots decided to transition into a tight end focused offense, partially due to market inefficiencies and under-appreciation of the tight end role, but also because of need.

Moss had declined and there was no one there to pick up where he had left off. The Patriots made the move to acquire Deion Branch, who played admirably, but was never the imposing physical player that New England needed. His rapport with Brady will never be in question- he just lacked the ability to take the offense to the next level.

So outside of the few seasons of Moss and last year's Brandon Lloyd, the Patriots haven't had a reliable outside target. And when looking at the receiving yards by the receivers on the outside? 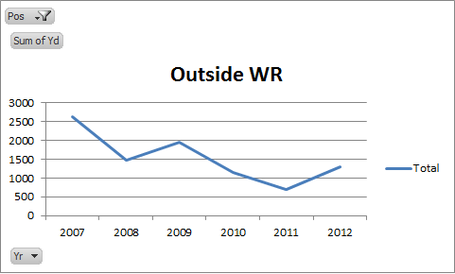 You can see that over the past five years, the yards directed at receivers on the outside has cut itself in half. There's been a clear increased reliance on tight ends, while Welker's hovered around 1/3 of the offense's total output through the past five seasons. That offensive focus shift on the interior receivers was clearly apparent in the past few playoff exits as the Ravens were able to bunch the middle of the field and the Giants were able to disrupt the passes up the seam.

Last season's acquisition of Brandon Lloyd came with the clear goal of balancing the offense by reintroducing an outside element which, in my opinion, would have succeeded had the tight ends remaining healthy all season. 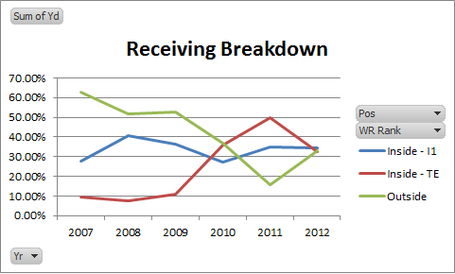 The above chart shows the breakdown by receiver- the blue line represents Welker, the red represents the tight end impact, while the green line is the outside receivers. Last season had all three roles level out in nearly exact thirds. Of course, this balance is more visually interesting than it would seem to be on the field- you can be sure the output wouldn't be balanced had Gronkowski played the full season- but it shows that the Patriots made a clear attempt to try and balance out their offensive attack with an outside receiver.

And this attempt for balance was evident in the draft as the Patriots used two of their draft picks on potential outside receivers- Aaron Dobson and Josh Boyce. Which leads us to the debate question:

Who will be the Patriots top outside receivers this season?

Danny Amendola (The Replacement) - Amendola is likely to be used in the Welker role in the slot, which should reduce some of his expected production on the outside. That said, don't be surprised to see Amendola to have a much bigger impact on the outside. Amendola has the size to be more productive on the sidelines and can bring a flexible element to the offense that the Patriots would love to take advantage of. While you can almost certainly write down a healthy Amendola for 75 receptions and 1,000 yards out of the slot, keep an eye out for his production outside the hashmarks.

Aaron Dobson (The Hands) - Dobson will likely have an absurd amount of unreasonable pressure on his shoulders for a few reasons: a) He went to Marshall, home of two of the best Patriot receivers of all time (Troy Brown, Randy Moss, definitely in that order); b) He has ridiculous highlights, so everyone will be expecting that every single game; c) The Patriots have been terrible at drafting receivers, so if he doesn't live up to his moon-level of hype, then everyone will call him a wasted pick. Dobson has the inside track as the #1 outside receiver this year, but it's enough to expect a rookie to have a basic level of impact, never mind the necessary WR1 level of impact.

Julian Edelman (The Convert) - Edelman is on a one year make-it-or-break-it deal. He'll always have a home somewhere due to his all-time level of play at punt returner, but he has to take his game at receiver to the next level. He has flashed potential as the #3 receiver in both 2009 and in 2012, but he needs to stay healthy and he needs to be consistent because he has a rapport with Brady that none of the other receivers on the roster has. Edelman's the dark horse to be the team's top outside threat.

Josh Boyce (The Wheels) - Bethel Johnson (5'11, 4.38, 10'7), Chad Jackson (6'0, 4.32, 10'2), Brandon Tate (5'11, ACC All Time Kick Return Leader). Josh Boyce (5'11, 4.34, 10'11) is the next in a line of athletic speedsters that Belichick loves to hope will develop into studs in the NFL. Boyce might be the most athletic of all of them and, unlike the others, comes with a basic aptitude of route running. Boyce can bring an element to the Patriots offense that they haven't had since Donte Stallworth in 2007 or Donte Stallworth in Week 14, 2012. While he's recovering from a foot injury that could set him behind the other prospects, Boyce is a big play receiver and could surprise everyone with some big numbers.

Donald Jones (The Duck) - Jones hopped over from the division rival Buffalo Bills and everyone (myself included) started licking their chops at the prospects of another Wes Welker- an in-division receiver who had plenty of success against the Patriots. Jones stands at 6'1, runs a respectable 4.46, and has plenty of potential. In fact, should the Patriots view Edelman as insurance for Amendola and should Dobson still be learning the offense, Jones might be the one to start the season as the outside receiver. If he does a good enough job, he might not let it go.

Michael Jenkins (The Vet) - Old Man Jenkins looked to be an early favorite for the WR3 spot during the off-season; he would've gotten away with it too, if it weren't for those meddling kids. Jenkins will be 31 when the season starts (younger than the top 2 Patriots receivers from last season), but he'll likely be the old man out in training camp. Should he stick around, Jenkins had been good for 40 receptions for 450 yards in the WR2/3 role for the Vikings- he could still provide value in the WR4/5 spot for the Patriots.

T.J. Moe (The Clone) - Moe is far from guaranteed a roster spot as an UDFA, but he comes with plenty of potential. He led all receivers in the combine in the bench press, 3 cone, and short shuttle- which basically makes him perfect for a slot receiver. Moe put up a 1,000 yard season as a sophomore, but he saw his numbers drop as a junior as Missouri moved from first round pick Blaine Gabbert to a new prospect (reason 1). As a senior, his numbers fell even further as the Tigers moved from the Big 12 (a league with no defense) to the SEC (a league with all defense), and had a quarterback change midway through the year. Moe stands at 5'11 so he could be considered a back-up for Amendola and Edelman- but that also means he could flash some value on the outside.

So who has the best chance of showing up and taking over the outside receiver positions for the Patriots?

Dobson is a clear favorite. Amendola and Edelman will likely be relegated to the slot role. I wouldn't be surprised if Boyce starts to have an impact around mid-season.

Who do you see having the big impact?