The Tampa Bay Buccaneers were in Foxborough for their second day of joint-practices before they face off against the New England Patriots on Friday. A Tom Brady injury is clearly the story of the day, but there is a lot more to take away from today's practice. Here are my observations: 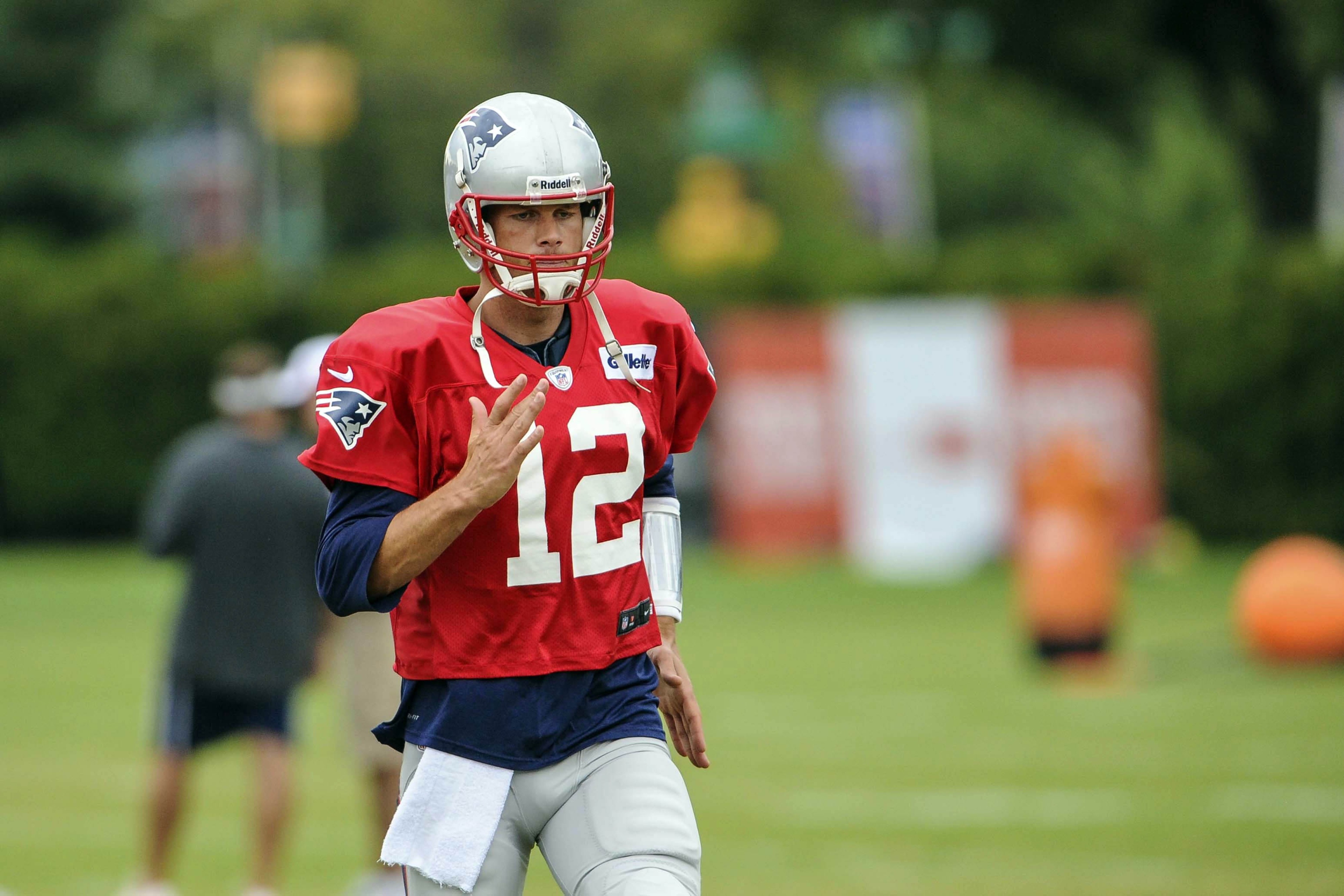 If you didn't know already, Tom Brady hurt his knee around the middle of practice and left for an MRI. Fortunately, he appears to be okay. In Brady's absence, both Ryan Mallett and Tim Tebow excelled. In my notebook, I have pluses all over the place for both players.

For Ryan Mallett, he showed very good touch on his passes, something that he tends to lack. There isn't one play in particular that stands out, but at one point he threw an absolutely beautiful 18-yard back-shoulder pass to Aaron Dobson, which was dropped. However, after successfully leading his 11-on-11 offense all the way down to the one-yard line, he made one of the worst plays I have ever seen him make. After looking away from his first read, Mallett turned to his right and fired a 95-mile-per-hour pass into the end zone. I don't know whom it was intended for but I do know Tampa Bay linebacker Dekoda Watson intercepted it and started running the other way. Mallett had one of his better all-around practices but it's those plays that worry me in the event that Tom Brady goes down with a serious injury.

Much of the same can be said about Tim Tebow, who was easily the best "#5" on the field today (Josh Freeman being the other one). Tebow is still too slow at making his reads but manages to make a lot of quality plays. Highlights include some picture-perfect passes to Julian Edelman in the end zone and to Zach Sudfeld in the seam. I wish the coaching staff would let Tebow loose during practices and let him run, because there were a few opportunities when he could've ran for a large gain, but instead forced a bad pass into traffic. Now, I don't want to mark this as a negative, because I think it's the obvious the Pats don't want him wasting reps by running -- we already know he can do that -- but some of his forced passes leave me questioning his decision-making ability. 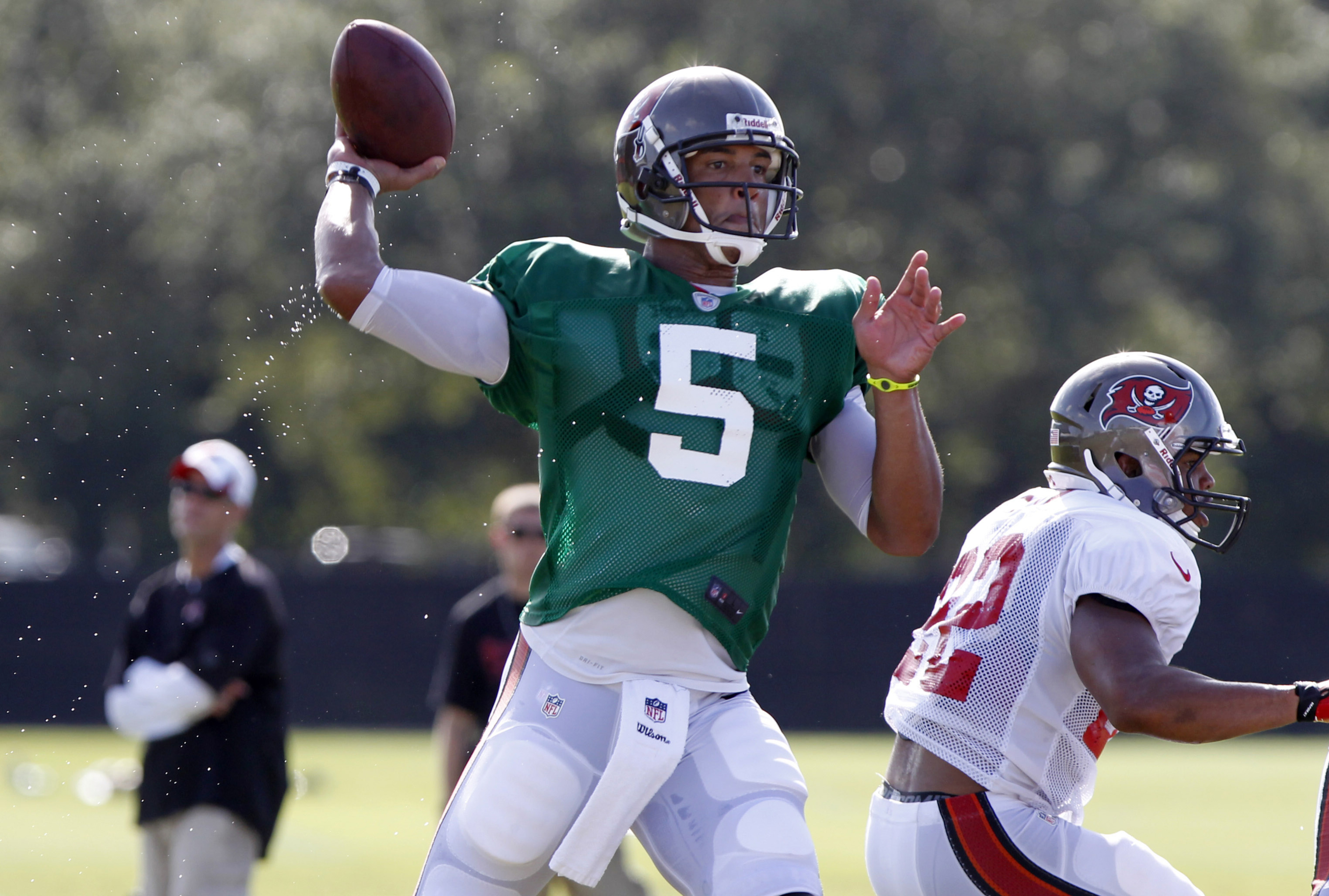 I thought Josh Freeman was absolutely horrible today. After he impressed me on Tuesday, he looked like the Freeman from the last two months of last season (you know, the quarterback that led the Bucs to a 1-5 record). I have him down for two interceptions; one by Aqib Talib and another by rookie Logan Ryan. There were also two passes that Steve Gregory could've intercepted but was unable to finish the play. While Ryan and Talib deserve credit for their interceptions (both of them jumped routes), it was more of a terrible play by Freeman than anything else.

I criticized Kenbrell Thompkins early in training camp for running relatively sloppy routes and dropping passes, but I have to admit that he has grown on me lately. I thought today was Kenbrell's best day of camp. His footwork on his underneath routes seems to have improved and he has had no dropped passes as of late. After initially projecting Josh Boyce ahead of him on the depth chart, I think Thompkins has surpassed him. 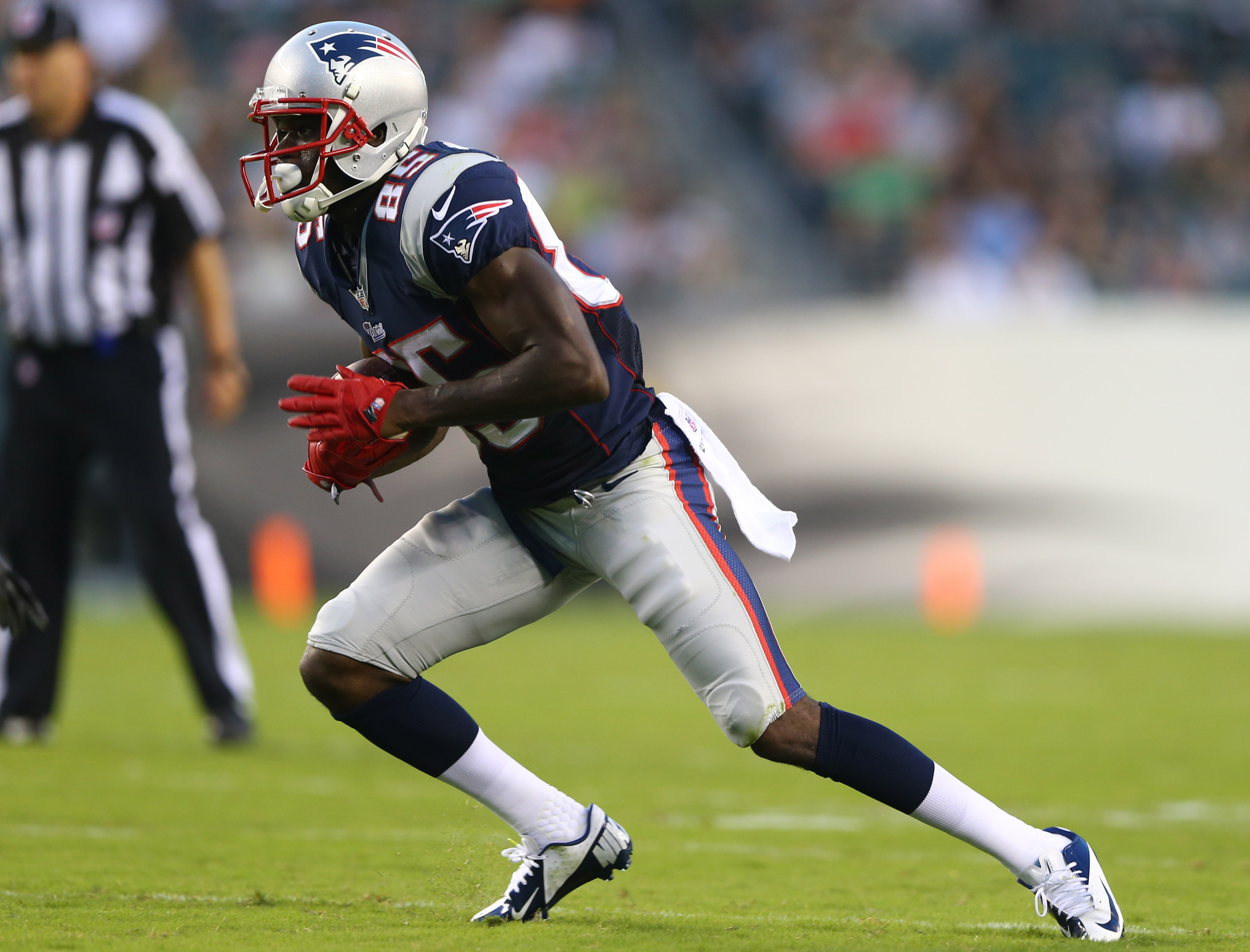 Thompkins didn't make any highlight-reel plays today but he did a lot of the little things that I look for in a wide receiver. During 7-on-7 drills, Thompkins made a sensational adjustment on a route to find the soft spot 20-yards down the field, allowing Ryan Mallett to make a nice completion over the middle.

Later on during full-contact 11-on-11's, I wrote in my notes that "85 finds soft spot again, same route as earlier." It's these little adjustments that Thompkins seems to have a very strong handle on. Technically he may not be as talented of a route-runner as Josh Boyce, and he may not be as athletic as Aaron Dobson, but right now he seems like a flat-out smarter football player and has chemistry with all three quarterbacks on the roster.

Expect a heavy dose of Edelman this year

A lot of people expected Danny Amendola to fill Wes Welker's role (he will for the most part, but Amendola can do a lot of things outside that Welker can't) but a guy that does all the things Welker does is Julian Edelman. Since Julian returned to practice last week, he has quickly become a fixture on the first-team offense. Edelman has worked almost exclusively out of the slot, whereas every other receiver moves around, much like with Welker the past six seasons.

Julian Edelman made some outstanding plays today, including two astonishing catches in the back of the end zone for touchdowns. One of them came on a terrific pass from Tim Tebow during the one-minute drill. Edelman ran a quick seam and extended to his apex to make the catch. Had the pass been any higher it would've been impossible for Edelman to make the grab. If Julian Edelman manages to stay healthy over the course of the season, I don't think it's unreasonable to expect him to catch a career-high 70-balls this year.

With Fells Out, Up for Sudfeld, Down for Ballard

Tight end Daniel Fells was absent from practice today and that opened up the opportunity for Zach Sudfeld and Jake Ballard to get increased snaps with the first-team offense. Unfortunately for Ballard, he still seems to lack top-end speed that he had before he suffered his ACL/micro fracture injury in early 2012. He doesn't move very well on seam-routes and loses a lot of his speed when cutting towards the sideline. Even though Ballard could eventually return to form, it might be too late for him to earn a roster spot on this team. 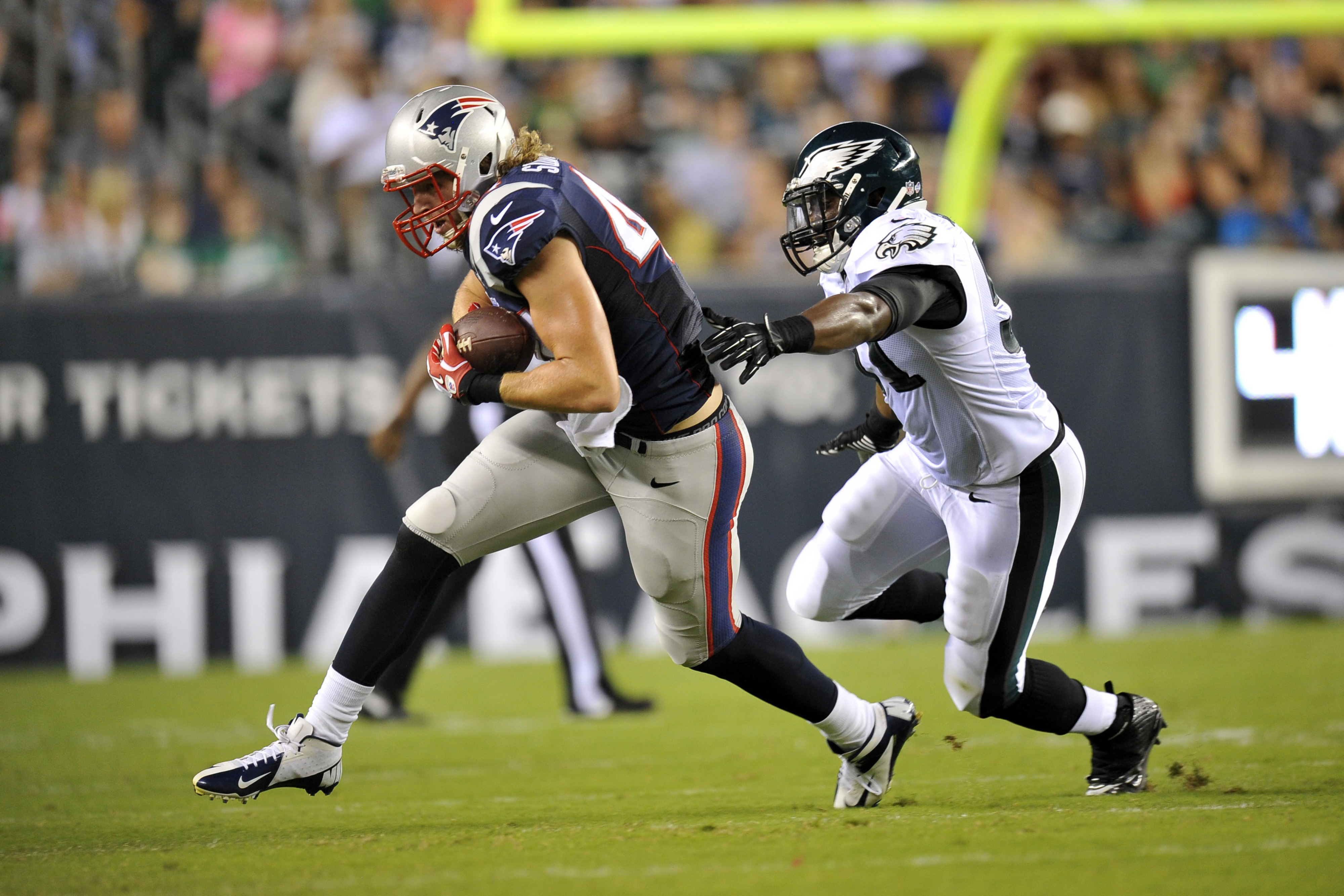 Zach Sudfeld is better in almost every category than Ballard. He's faster, runs cleaner routes, and appears to even have better hands. (It's also worth noting that Sudfeld received more snaps than Michael Hoomanawanui.) I have Sudfeld down for two touchdowns on the day, though one of them was called back on a bogus offensive pass interference call. However, his best play from practice came during Tim Tebow's repetition in the one-minute drill. Sudfeld ran a Gronk-like seam on the right-hash of the field but adjusted the top of his route to ease towards the open space on the right sideline. Tebow spotted him and fired a bullet in there for a long completion. It's these little adjustments on his routes that place him above Jake Ballard on the depth chart, and possible above HooMan.

It's football...there were some scuffles

During goal line punting work, Tavon Wilson and a player on the Buccaneers got into a shoving match that landed them both on the ground. Aqib Talib, who has blossomed into a team leader, sprinted over and grabbed the player off of Wilson. Shortly thereafter, working on the other end of the field, two players go into a scuffle during goal line work. I didn't get a good look at which players were involved, but one of them could've been Jake Bequette. Fortunately no players were kicked out of practice.

Alfonzo Dennard and Ras-I Dowling remained on the sidelines and were inactive for today's practice. In my opinion, the Patriots secondary, and thus defense as a whole, hasn't been as productive without Dennard playing at outside cornerback. Kyle Arrington isn't nearly as effective out there and as a result, that puts more pressure on the safeties. While the defense didn't play bad today, I don't think they are at the level they can be without Dennard.

If you're like me, you're well invested in the battle between Zoltan Mesko and Ryan Allen for the starting punter job. It's been close throughout camp but I thought Mesko outperformed Allen today. Mesko appeared to be more accurate and was booming his punts, averaging a 4.57 hang time. On the other hand, Allen was less than stellar with an average hang time of 4.17. Both players had miscues, as Allen had a punt blocked, and Mesko muffed one of his own. 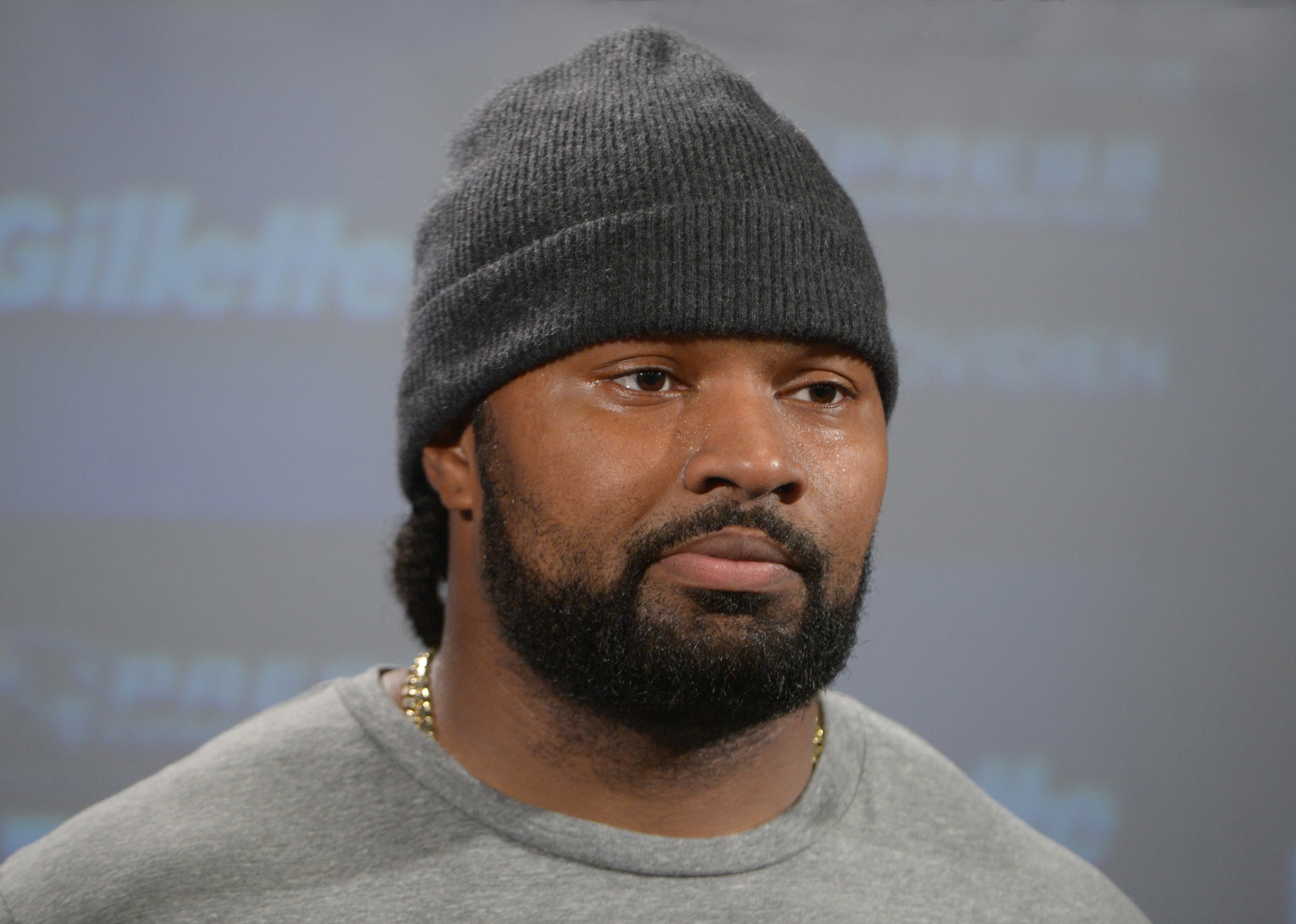 - Jerod Mayo lined up once in a three-point stance right over the center. I couldn't tell if it was the 0-gap (right in front of the center, like a nose tackle) or the 1-gap (over one of the center's shoulders), but it was very weird to see Mayo with a hand on the ground. At the snap it appeared Mayo jumped up into a two-point stance and then rushed the passer, but I'll be looking for that element of disguise again later in the season.

- Rob Ninkovich was practicing as a long snapper with Ryan Allen after practice. Ninkovich is the team's emergency snapper, though you could make the argument that he could easily start if he weren't such a good defensive end. Each snap was absolutely perfect.

- Special teams coach Scott O'Brien spent a lot of time during practice speaking one-on-one with Kannorris Davis, who is a rookie safety out of Troy University. Davis has worked almost exclusively with the special teams, so either he was making some mistakes out there today, or O'Brien wanted to spend extra time with him because he sees potential.

- Aaron Dobson had quite an up-and-down day against the Buccaneers secondary. In addition to three bad dropped passes, there were a few instances when he was dominated and was unable to break free from coverage. One play that stands out came during 11-on-11s when he was matched up in the slot with safety Mark Barron. Dobson ran about ten-yards down the field and cut in for a post but Barron was glued to him the entire time. At this point in training camp, I am concerned about Dobson's ability to create separation between the 20's. However, in the red zone his length and leaping ability makes him a threat.