The Patriots were expected to take the field against the Detroit Lions, but I'm fairly certain they never made it past the airport. Let's relive the moments through the lens of Twitter.

Share All sharing options for: Social Commentary: Patriots vs Lions

Anyone else glad the game ended?

That was the Patriots first half. Nine possessions. Four turnovers (five if you count the turnover on downs). The offense crossed midfield three times and only got 3 points to show for it. Silver lining? Somehow the Lions offense only managed to post 16 points, which means the Patriots first team was definitely doing their job.

And looking at the bright side?

This Patriots offense is doing a good job of putting their defense in valuable tough preseason situations.

In true Belichick fashion, it's clear that the Patriots offense was really just setting their defense for real life situational football. The defense faced off against the Lions with a short field (<40 yards to paydirt) three times and only gave up 10 points- and two of those drives started in the red zone. On the five drives where the Lions had to go 60+ yards, the Patriots forced four punts (all three and outs) and let up one field goal.

With Vince Wilfork getting the night off, rookie Joe Vellano played the nose tackle spot and did a solid job. While he didn't collapse the pocket, he wasn't blown off his spot and that's a good enough start against first teamers in my book.

Next to Vellano was the veteran Tommy Kelly who continued to have an awesome preseason, racking up a shared sack and a QB hit. Sophomore Chandler Jones looked good as he pitched in a QB hit of his own and notched a couple of good pressures that forced Stafford to throw some ugly passes.

Mr. Rob Ninkovich. Nink was easily the best defensive player on the field and that's been a consistent theme this offseason. He's been generating plenty of pressure, he's been showing strength in pushing the pocket and maintaining his point. They've been dropping him into the slot to complicate looks (even though he usually just chips the receiver and rushes the passer). Ninkovich has been a crucial chess piece for the Patriots defense the past few seasons, a movable weapon that can flex into any front.

What does all this mean? It means that Nink will be able to find some place next season who, if he remains healthy, will offer a minimum of two years, $8.5mm. Ninkovich is closing out the last season of a two year, $2mm/year extension. If the Patriots want to avoid another Wes Welker debacle (and I honestly think Ninkovich is too valuable of a flex piece to lose on this defense), they'll be looking at three/four years and $4.25mm/year.

Of course, that would put Ninkovich in between franchise cornerstone Jerod Mayo and wide receiver Danny Amendola when it comes to the cap hit. It would put him above Sebastian Vollmer and Rob Gronkowski (to be fair, Dan Connolly is higher than both of them as well), but I think that may be worth it. Would Nink be willing to take less money for additional years? One can hope.

Ninkovich definitely continues to help his case for a big time contract.

When looking at the other big names up for free agency (center Ryan Wendell, linebacker Brandon Spikes, cornerback Aqib Talib), I think Nink is the most indispensable. Wendell is clearly a rising star, but it seems like Dante Scarnecchia can turn any Joe Schmoe into a top starter in the league. Talib absolutely solidifies the defense and is the best corner on the roster- and is playing very well this preseason- but I don't consider him so much of a franchise player as a one year rental. If he wants to come back, that'd be great, but I don't think anyone counts him in their long term plans.

And then there's Spikes. He is a brutally awesome run stuffer and blitzer. He's also brutal in coverage. The Patriots played Spikes alongside Dont'a Hightower in their nickel defense (4-2-5) and both Spikes and Hightower were abused by the shifty Reggie Bush, as well as the receivers streaking across the middle. Spikes is a great thumper for the 3-4, but he'll keep getting exposed dropping into coverage. I wouldn't be surprised if the Patriot are thinking of a Hightower - Mayo - Collins future line-up.

And when it comes to the other Patriots veterans...

Gregory gets on Duron Harmon about blowing his assignment on the TD. Blaming the rookie. Slick veteran move

Back to the game. You'd be surprised that the first team defense only gave up one touchdown. The touchdown was a total breakdown in coverage. 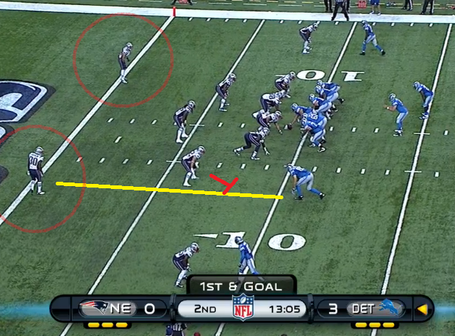 The play starts and it's a simple enough attack by the Lions (I'm telling you as Mr. Hindsight). Lions are going to run the play action, with the intent of throwing the ball to tight end Tony Scheffler up the seam. This is the Patriots bread-and-butter so they should be experienced against this in practice. In this match-up, the Patriots are playing Cover 2.

Duron Harmon and Steve Gregory's role in the Cover 2 are to watch over their respective deep halves of the field. Of course, this is a short field so they don't have to do much with regards to the deep ball. Still, with the Lions showing two outside receivers, both safeties have to be aware of the possible threat. To counter the Lions package, and to allow the safeties to still contribute in defending the middle of the field, the two cornerbacks are funneling their receivers to the center of the field. This prevents any excessive damage on a backshoulder throw, it allows the linebackers to help with interior coverage, and it helps the safeties so they don't have to drift to the deep corners of the field. 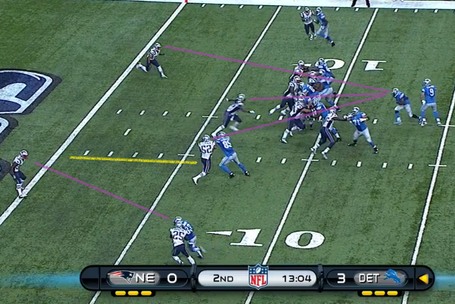 Play action. Everyone bites, except for the rookie Duron Harmon. Weakside linebacker Dane Fletcher's main role was to chip at the tight end and, (I don't know since I'm not the coach), he either can crash the box to stop the run, or run with the tight end a little bit to help with the coverage.

I'm under the impression that Fletcher bit too hard on the play action since his chip at Scheffler was hardly sufficient and he left the tight end wide open up the seam.

For the safeties, Gregory actually has nothing to do with this play since it's not his responsibility. Harmon sees the wide receiver on the inside of the cornerback so he steps over to assist with the coverage, just in case Stafford throws the inside slant. 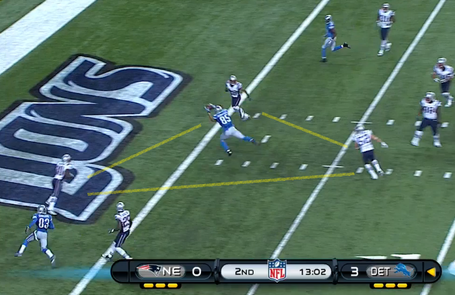 The end result is the Bermuda Triangle of coverage. Scheffler is wide open up the seam with everyone caught looking. 99 times out of 100, this is a touchdown (I'm assuming that Mark Sanchez gets that one miscue).

While technically this is Harmon's coverage responsibility, he also had to help Kyle Arrington with coverage on the inside of the receiver. I believe that Fletcher needed to do a lot more when it came to his contribution (but it's up to the coaches if he acted as he was supposed to on the play action).

At the end of the day, everyone was doing the role they thought they were supposed to be doing. They just didn't do it well enough, and I'm sure the coaches will let them know how they can fix it in the future. For now, though? 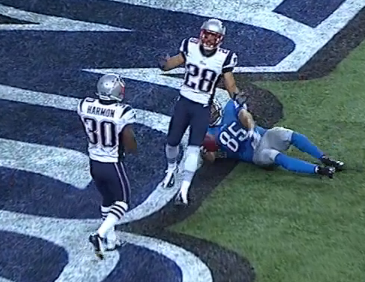 Dan Connolly has 4 kick returns for the Patriots for 106 yards. His yards/return rate is the second best of any Patriot since 2008 with two or more returns (behind Ellis Hobbs).

Let's hope the Patriots can find some mojo in the kick return area as Leon Washington really hasn't had a chance (his three returns for 66 yards are good, but not great). Washington needs to flash as a kick returner to save him a spot since he's not really going to beat out Shane Vereen or Brandon Bolden as the hurry-up back, and he's not going to be replacing Edelman at punt returns any time soon. If he doesn't, there might not be a roster spot for him.

Might be a slightly uncomfortable environment in the Patriots locker room at halftime.

Fitzy and former Boston Globe writer Albert Breer summed up the half time moment for the Patriots. If only we could hear what was going on inside of that locker room...I feel like it might be something straight out of Full Metal Jacket during boot camp.

And in case you thought whatever happened during the half time coach up might have worked...

It's not getting better.

Spoiler: It did not. The second half was just as, if not more, painful than the first half and they didn't turn the ball over in the second half. The defense couldn't stop anything. The offense couldn't put anything in the end zone. Special teams was sub-par.

The Lions scored three touchdowns and a field goal on their four second half drives. The Patriots had two three-and-outs, a turnover on downs on the 4 yard line and one touchdown in the final minute. The Lions could do no wrong and the Patriots could do no right.

And the star of the second half?

Either Joique Bell is using a truck stick cheat or the Patriots are having some serious troubles tackling. I may bet on the former.

But a final reminder for all of you on a cliff after that game:

this #Patriots offensive performance is going about as well as it did when they came here 3rd preseason game in 2011...

Step back from the edge. It's going to be okay. The 2011 season went pretty well for the Patriots, if I recall correctly.

If Danny Amendola, Kenbrell Thompkins, Aaron Dobson, Josh Boyce, Rob Gronkowski, Zach Sudfeld, Stevan Ridley, and Shane Vereen can't match the 2011 weapons (which featured Deion Branch and Chad Ochocinco as the WR2 and WR3 and BenJarvus Green-Ellis as the feature back), then I will be genuinely surprised.

Add in the fact that our defense heavily featured the likes of Antwaun Molden and Tracy White back in 2011? Well, our defense has come a long way in the year+ since that time. From 31st in yards allowed to 25th (who cares), and more importantly 15th in points against to 9th last season (no one talked about that). If the defense can take another step forward, they can more than make up for some of the growing pains that will take place until Gronkowski is healthy and the rookie weapons adjust.