After two weeks of training camp practices, the New England Patriots open up the preseason tonight at 7:30 p.m. against the Philadelphia Eagles. Here is what I'll be watching for tonight:

Whether you're a hardcore Patriots fan, a fantasy football freak, or a pink hat fan watching only for Tom Brady (and Tim Tebow), everyone will be keeping a close eye on who Brady is throwing the ball to. Besides Danny Amendola, who is going to stand out? Throughout camp the majority of Boston beat writers have praised rookie wide receiver Kenbrell Thompkins, but I have been more impressed with both Aaron Dobson and Josh Boyce. 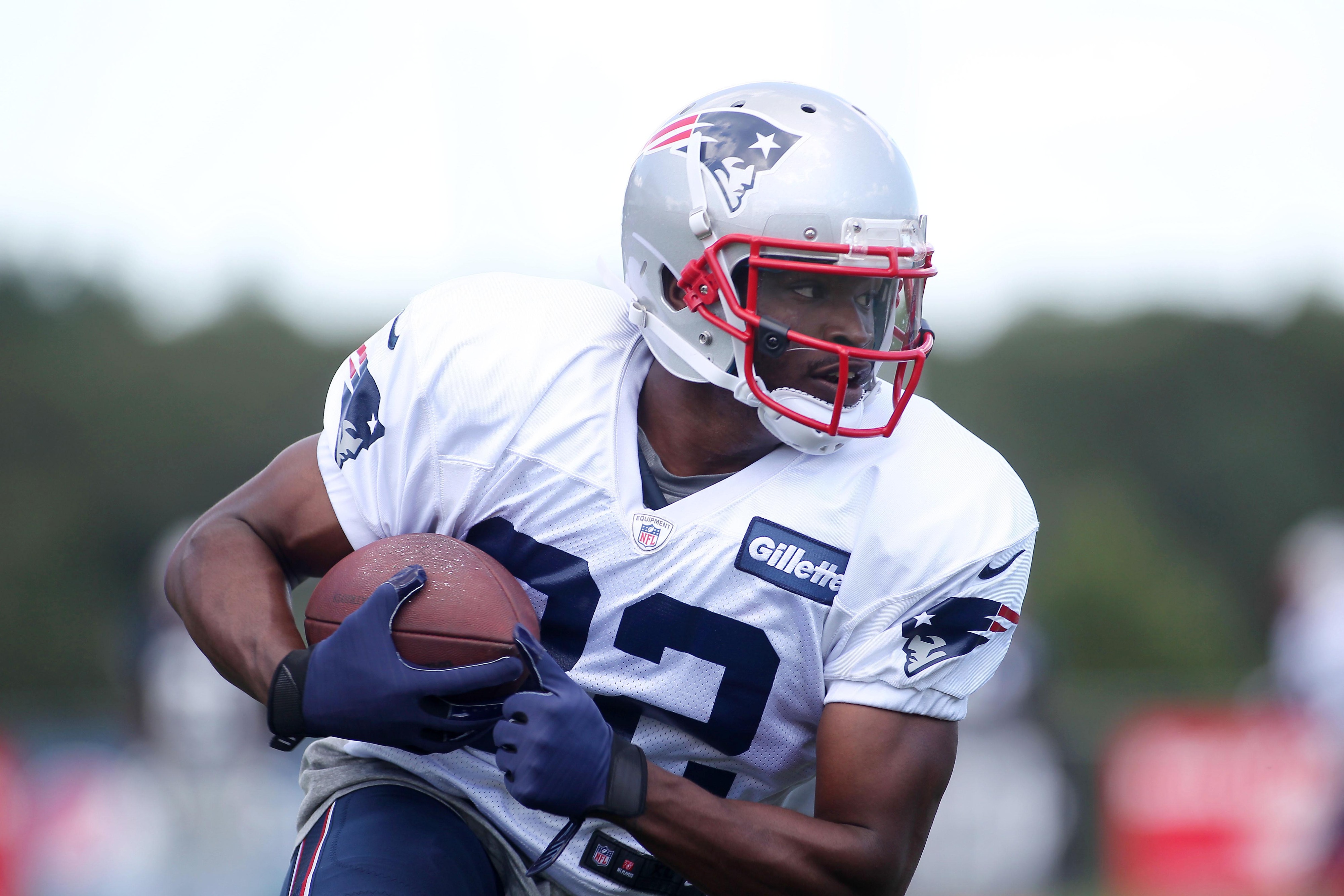 I'll be keeping an eye on who starts, but more importantly where each player lines up. I have been surprised (and encouraged) to see Aaron Dobson lining up all over the field even though he primarily lined up as an "X-receiver" in college. I think Josh Boyce is an exceptional route-runner and that is what sets him apart from Kenbrell Thompkins. Both players do similar things but Boyce, in my opinion, is fundamentally better. Dobson probably has his spot established as a starting outside receiver, but that third wide receiver spot is up for grabs.

With Rob Gronkowski currently on the physically unable to perform list, and Aaron Hernandez wearing a "new uniform," the Patriots are without their terrific tight end duo. Even though Gronk will return at some point, it's very important that tight end depth is solidified behind him. Michael Hoomanawanui will most certainly earn a roster spot due to his versatility, but there are a lot of question marks after him.

Veterans Daniel Fells and Jake Ballard play a similar role as "Y" tight ends, but Ballard still looks like he's less than 100 percent after suffering a torn ACL and micro fracture over a year ago. Zach Sudfeld is a rookie tight end that has played both the "Y" (like Gronk) and "F" positions (like Aaron Hernandez or HooMan) to an effective level throughout camp. I'll be watching how he is utilized and I'm curious to see if he gets playing time ahead of both Ballard and Fells.

Chandler Jones has filled out his frame and appears to be much more muscular than he was at the beginning of last season. This sounds all well and good but it doesn't mean a lot if he hasn't improved his pass rushing moves. Last season Jones was fairly raw despite having six sacks after eight games. If it weren't for an ankle injury in week ten, Jones most certainly would have eclipsed ten sacks on the year but that's only the beginning of what he's capable of.

If Jones enhanced his pass rushing repertoire of moves half as much as he improved his body, I would expect him to reach 15-plus sacks on the year, as well as consistent pressure on the quarterback. He could also begin to draw double teams, opening up more space for blitzers. Again, this all hinges on his development rushing the passer from a skills-standpoint.

I never expected the Patriots offense to look so good early in camp. Every single young player on offense seems to have a good grasp of the offense. Considering each receiver has lined up at different spots and appear to know what they are doing, I want to see if it will translate to the field. I hope to see the Patriots run the no-huddle because that will do wonders for the development of each young player. Knowing where to be is extremely important because it establishes trust with Tom Brady. Even if a backup quarterback is in the game, the repetitions are useful. 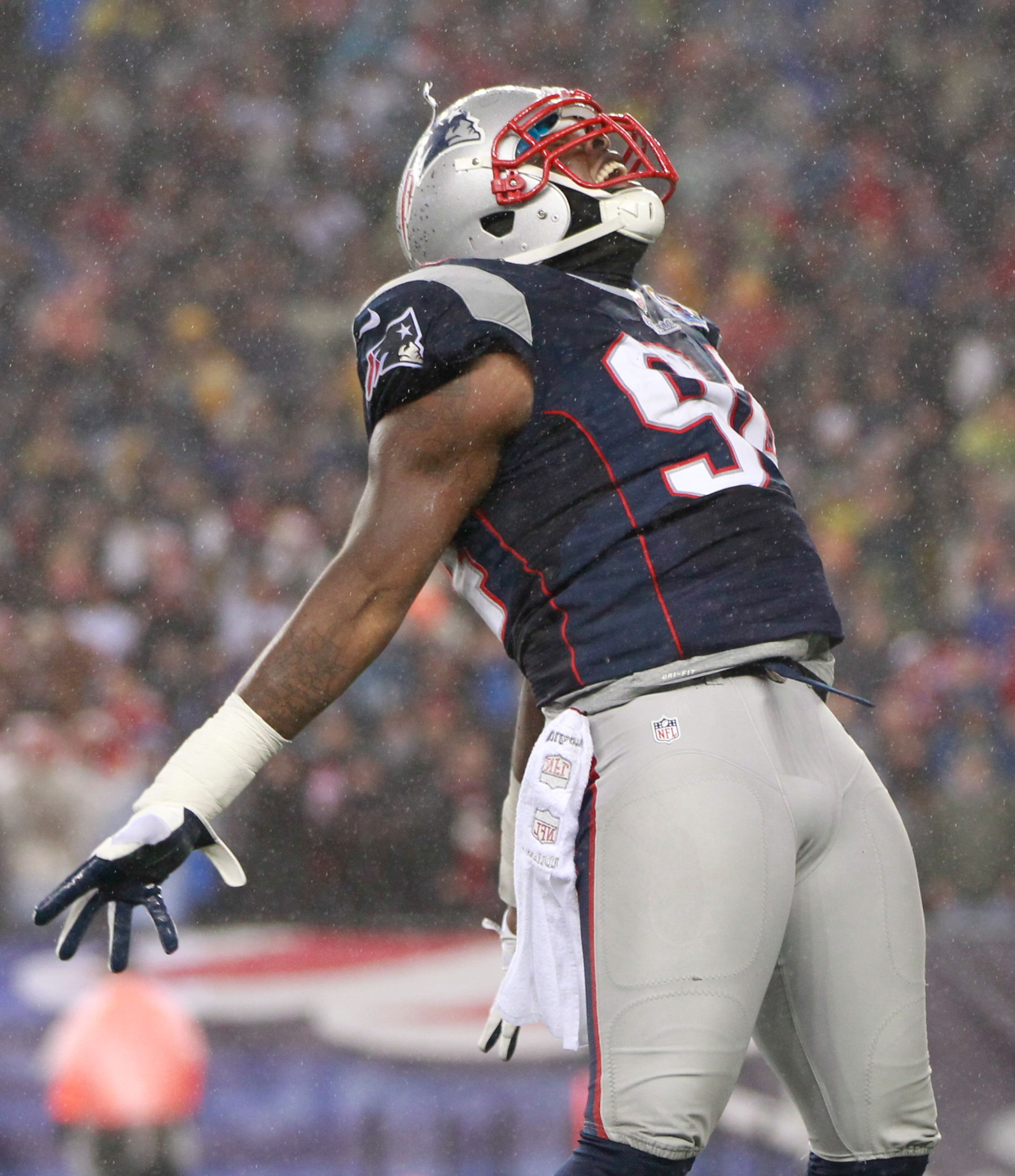 Throughout camp there have been a number of different defensive alignments and blitz packages that reminds me of Patriots defenses from the mid-2000s. During the fourth practice there was one blitz when Justin Francis lined up in a three-point stance (one hand on the ground) at the right defensive end position, but he stood up at that snap and dropped back into coverage; Adrian Wilson instead rushed the passer. Even though this won't happen very often, it's another disguise on defense that Bill Belichick hasn't been able to use effectively since the days of Rodney Harrison.

5. Utilization of the fullback

Josh McDaniels loves to use fullbacks and that was apparent when he was brought on last season. Michael Hoomanawanui is often used in a fullback or H-back role but I have been surprised to see James Develin receive so much playing time during camp. I highly doubt he makes the roster but the fact he has played so much makes me wonder if there is a possibility he makes the team. At a couple practices I saw LeGarrette Blount line up at fullback ahead of Stevan Ridley and I want to see if that package is used in goal line situations tonight.

Aqib Talib has been extremely impressive throughout camp but Alfonzo Dennard has been up-and-down, and has even spent some time playing the second unit. If Kyle Arrington lines up outside, I want to see if it's rookie Logan Ryan or veteran Marquice Cole that gets the nod as the slot-corner. Every NFL team spends the majority of their time in sub-packages, so this personnel is tremendously important.

At safety, Devin McCourty has his spot solidified (unless he moves to corner), but Adrian Wilson, Steve Gregory, Duron Harmon, and Tavon Wilson have all shared playing time. Sometimes Adrian Wilson is shifted into the box in a cover linebacker type of role, and Gregory is inserted at safety. Behind them, Tavon Wilson has had a subpar camp but I want to see if Duron Harmon can potentially pass him on the depth chart. 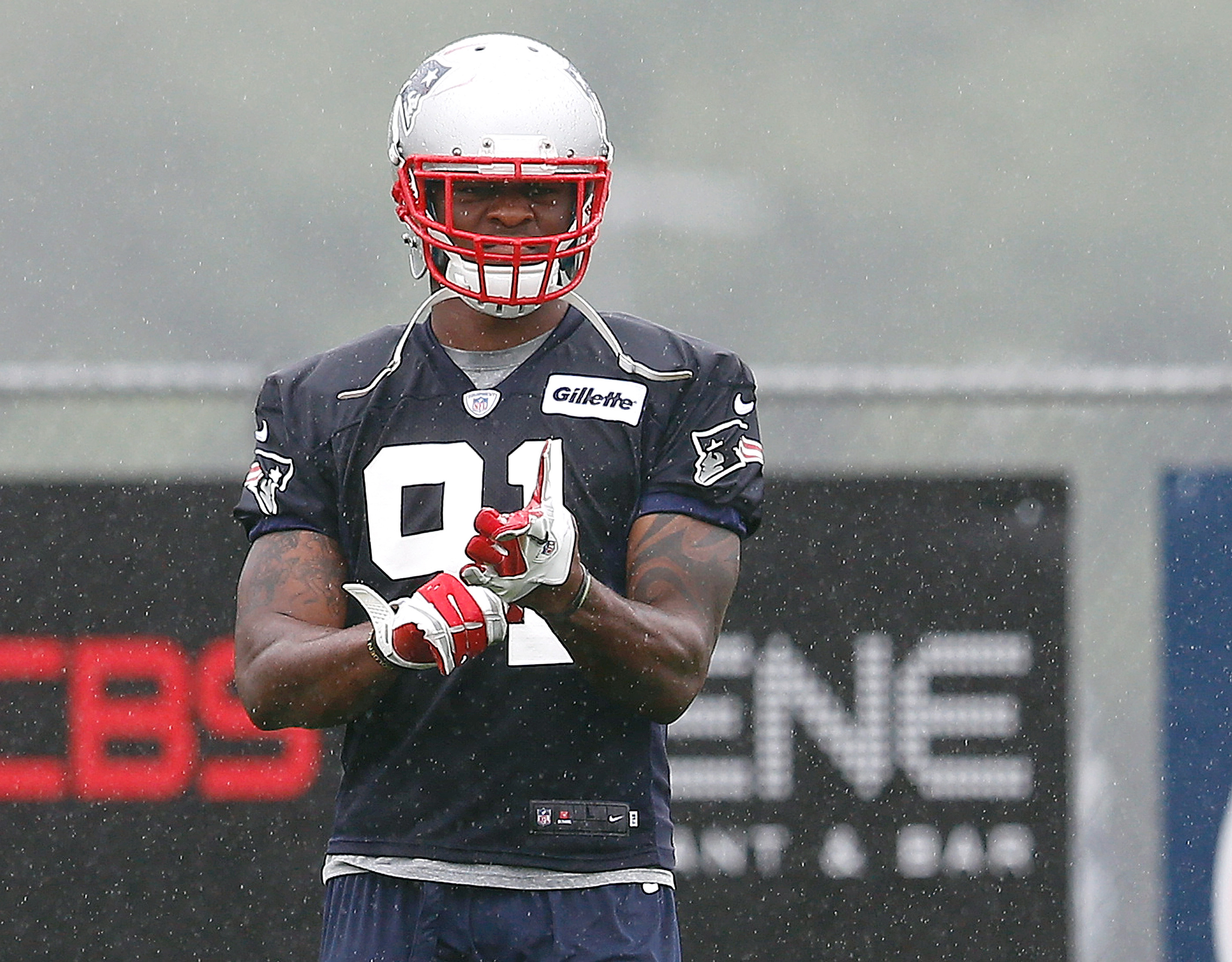 Rookie linebacker Jamie Collins could potentially play a vital role this season as a linebacker that substitutes on passing downs. Whenever Brandon Spikes comes off the field, it seems like Collins is the player coming on. Throughout camp Collins has rarely blitzed and instead has spent most of his time covering tight ends. The Eagles have three talented tight ends in Brent Celek, James Casey, and rookie Zach Ertz, so I want to see how efficient Collins is at covering each of them.

This is likely for maintenance but keep an eye on Sebastian Vollmer's playing time throughout the first half. I would assume he sits the entire second half but in camp backup offensive lineman Will Svitek has gotten his fair share of first-team reps at right tackle. Is there a battle brewing? Vollmer has been better so I doubt it. But he does have a history of back trouble and I'm guessing the Patriots just want to minimize the chance of him reinjuring it. With Dan Connolly still on the mend, take notes on who primarily plays at the right guard position. Marcus Cannon played well early in camp but has been held out of practices lately. 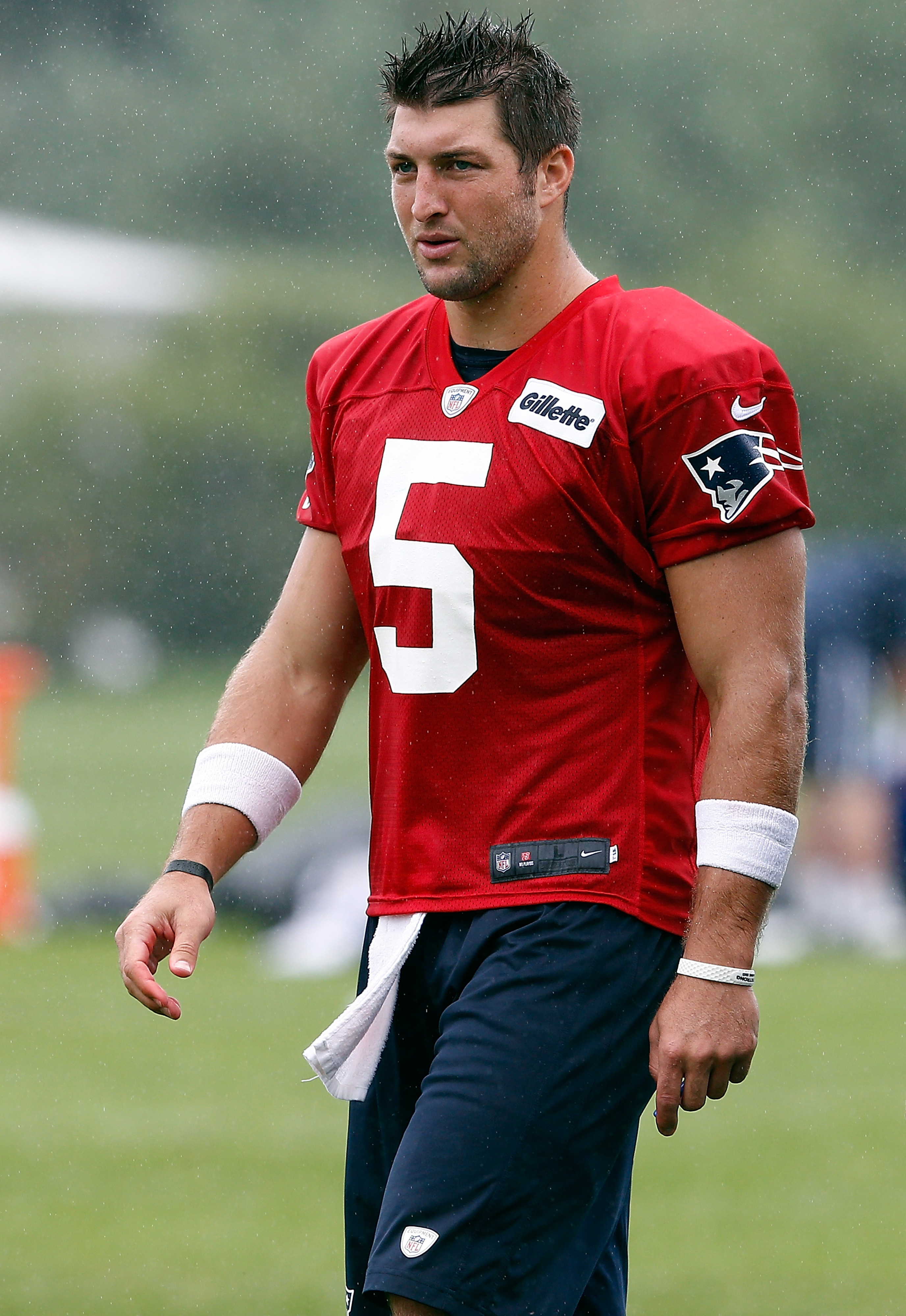 Tom Brady isn't expected to play much tonight so Ryan Mallett and Tim Tebow will get a plethora of opportunities to prove that they belong in the NFL. Interestingly, both players have similar strengths and weaknesses. Both are too slow at making their reads, but they do throw a stellar deep ball. Sometimes I think Mallett lacks touch on the ball (something Tom Brady is the absolute best at), but he has looked more polished at certain points throughout camp. I want to see Mallett establish consistency, something he lacked the past two preseasons. I'm more excited to see how Tim Tebow is utilized by Josh McDaniels. I've got a funny feeling the offense will look like a different team when Tebow is on the field, which should make for a fun fourth quarter.

Okay, okay, I know I might be alone here but I think this battle deserves more attention. Football is a game of inches and if Ryan Allen outperforms Zoltan Mesko in the pre-season, I believe he will win the starting punter job. I have written all training camp about how extraordinary both punters have been but in-game situations are their chance to truly shine. I'll be paying attention to not just each punters hang time (both are about equal throughout camp), but their accuracy on punts from mid-field; that's where I think Allen has been better than Mesko in camp. Will that carry on during a live game? We'll find out starting tonight.

There is probably a player that nobody is really talking about right now that will step up throughout the preseason; maybe that player shines on Friday night against the Eagles. A few names to keep in mind happen to be defensive linemen: Marcus Benard, Michael Buchanan, Joe Vellano, and Marcus Forston. Vellano is a high-energy player from Maryland that could make some noise in the pre-season, though it's not often you hear his name mentioned in training camp.