Shaking my head, Mike. C'mon now. Cover that up.

Well, we knew it was going to happen. Mike Lombardi was brought aboard to help with the scouting and had the benefit of a headstart due to the Browns not being in the playoffs. The expectation was that he'd have some advanced knowledge.

Looks like he kept some of the knowledge he acquired with the Browns. 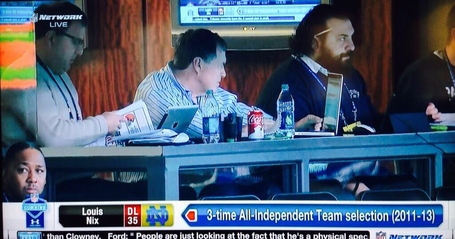 Picture courtesy of @PatriotsSB49 and the NFL Network

That is Mike Lombardi with Bill Belichick and Matt Patricia at the NFL combine, watching the defensive linemen run through their drills. Lombardi is clearly thumbing through a book with a Cleveland Browns logo on the cover.

I mean, no one should be shocked by this. Lombardi did the research and had the book. Maybe it's something from the past. Heck, maybe it's a generally issued book and that page just so happened to have the Browns on the cover. Or maybe it's from Belichick and Lombardi's original stint together.

But the smell test doesn't pass and it's likely that right from the Browns. C'mon Mike. At least cover that with a newspaper, or something.