Some players can't succeed in the cold. Let's take a closer look at how it affects quarterbacks.

He can't throw in the cold. He throws ducks. The wind is too much. Why is he going sleeveless?! He's lucky it's nice out. Domes are easier than playing outside. They hope they don't have to travel to New England. San Diego is gorgeous. Take the wind.

I feel like weather was been a greater topic of interest this past season and very little is understood. General statements are thrown around, like "run when it's cold," or "it's hard to throw below 32 degrees," without actually understanding the real impact. People have tossed around how Brady is an elite cold weather quarterback, while Peyton Manning can't handle the elements. But how true are these statements and how does the cold really affect quarterbacks?

I decided to see how much temperature affects a quarterback's completion rate and how that should be included in future discussions. Let's start with a picture: 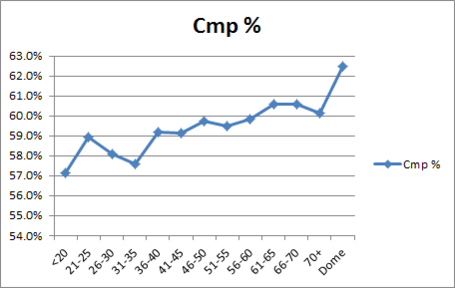 That's the average quarterback's completion rate by temperature over the past 10 seasons. No, I'm not going to factor in global warming.

Now I've decided to apply the above averages to this past season to compare how quarterbacks fared to how an average player would have played in those situations. A player who completes 60% in the bitter cold will be awarded greater than one who completes 60% inside. I will only be looking at those who started 75% of their games (and Aaron Rodgers and Jay Cutler because people will be curious), which knocks down the list to 25 qualifying QBs.

Method: I've categorized each game of the past year according to the temperature at kick-off and compared how the quarterback fared in relation to the expected production. I weighted each game according to the percent of the quarterback's total passes on the season. Playoffs are included. Defensive prowess is not factored in, but totally should be if someone with greater resources wishes to push this concept forward.

The results may, or may not, surprise you. Here are the top and bottom 5 quarterbacks in weather adjusted completion rates:

So here's a list of best-to-worst completion rates in 2013, taking weather into account. The Packers' Aaron Rodgers adjustment is the best in the league, while the Jets' Geno Smith sits at the bottom. Our own Tom Brady had a less than stellar season, performing worse than expected in the elements. Quarterbacks like Phillip Rivers, Peyton Manning, and Matt Ryan owned the elements, which may catch some people by surprise due to Rivers being based in a warm-weather city, Peyton having the documented claims of his struggles all season, and Matty Ice being a dome player.

Now, of course these numbers will be skewed by receiving talent. Those with great talent around them will succeed in any weather, while those with a dearth of talent will struggle. Still, it seems as if this issue is exacerbated with inclement weather.

What can we take away from this? Last year definitely wasn't Brady's finest. Sure, he didn't have any of his expected talent, but he definitely didn't elevate his teammates in the way he normally does. As Brady gains familiarity with his new targets (and his older ones return from injury), his completion percentage should increase in all weather.

We also can see how much weather has an impact on the quarterback position. While no one is freezing their hands off week-in and week-out, those who come from fair-weather locations or domes clearly have an advantage when examining the raw stats. The challenge is in understanding the elements and adjusting the lens through which you evaluate the players.