The Patriots might be moving forward without a core special teamer. Let me tell you why LeGarrette Blount is a key player.

Share All sharing options for: Hidden Value: LeGarrette Blount and the Kick Return

The Patriots have an extremely important special teamer that's due for a new contract.

No, it's not two-time All Pro gunner and captain Matthew Slater, who is up for free agency after this season, and carries a potential cap savings of over $1 million this year.

No, it's not All Pro kicker Stephen Gostkowski, who tied for the league lead in field goals made and attempted, ranked second in field goals made of 40+ yards (behind only Adam Vinatieri), ranked 4th in touchback rate and 6th in average return yards, and who is also up for free agency and carries a larger cap savings of $2.6 million.

It's been a long time since the Patriots have had such an impactful return man on special teams. The last I can think of is Ellis Hobbs in 2008. And as it stands, the Patriots could be losing their franchise leader on kick returns.

The player that I'm going to talk about is LeGarrette Blount and his undeniable importance to the Patriots return game.

To start, let's look at a graph: 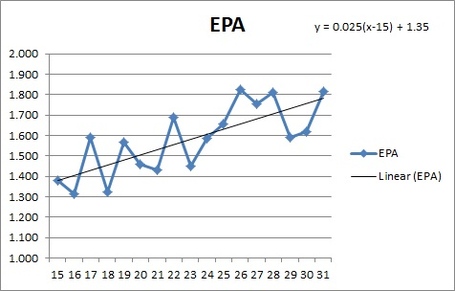 This is a graph for the Expected Points on a drive, based upon where the team returns the kick-off (including touchbacks as going to the 20 yard line). These numbers are based on the past five seasons of data and are generally accepted.

What we can take away from this chart is that the expected points from a drive increases with every additional yard on a return. A player with four extra yards per return (the difference between Devin Hester and Tedd Ginn Jr.) would be valued at an additional 0.1 points per drive.

The league average in returns over the season was 83.4, with an average of 40.9 touchbacks per team. This means the average team would expect to return 42.5 kickoffs last season. An average of four extra yards per return would yield roughly 4.25 additional points over the course of the season.

That said, it's rare for one player to return every kick for their team. The Bears led the league with 99 kick returns and Devin Hester only fielded 52 of them.

The Patriots returned the ball 39 times. Blount took back 17 of them, which is less than half. I think he was greatly underutilized.

Blount ranked fourth in the league in yards per kick return, with an astounding 29.1 yards/return (minimum average of one return per game). He is the only player in the top 20 to weigh over 215 lbs- and he tips the scales at over 245. Blount is the only person in the top 10 to not have 4.4 speed, a history in track and field, or be a historically dominant return man in college.

That Blount is at the top.

Over the course of last season, the Patriots were middle of the road when it came to returning kicks; it was generally a coin flip, with the Patriots returning 39 out of 79 opportunities (12th most frequent). The more aggressive teams?

2. The Vikings have Cordarelle Patterson (ranked 1st) and they returned 67.3% of the time.

Two other teams with a top seven returner were Dallas, with Dwayne Harris, and Baltimore, with Jacoby Jones. Those teams returned the ball 50.6% (15th) and 55.0% (6th), respectively. Trindon Holliday ranks in the top 7, but the altitude influences how frequently the ball is returned in Denver.

So when evaluating kick returners, four of the teams that feature a top seven returner rank in the top 6 in return frequency.

Conclusions? Maybe Blount should return the ball more. The average kick return in 2013 went for 23.3 yards and Blount's 29.1 yards per return yields an expected 0.145 points per drive above an average returner. While Blount returned it only 17 times, that still presents an additional 2.47 expected points over the course of the season.

For comparison, Hester returned the ball 52 times and he returned for 4.3 yards more than average. He added roughly 0.108 per drive and, over the course of the season with his 52 returns, added 5.59 expected points.

This means that even though Blount was a more effective returnman on a per-return basis, Hester's utilization (3x more returns) yields much greater expected returns.

But what if the Patriots used Blount like, ahem, Hester? Hester returned the ball for roughly 74.3% of the Bears opportunities. Blount saw 43.6%. If Blount saw Hester's usage levels, he would have had 29 returns on the season; if he maintained his average, Blount's added value balloons to 4.20 expected points.

But perhaps Blount's value isn't just how he runs, but when he chooses to run (and this could be some added value from Matthew Slater telling Blount when to run).

As a rule of thumb, if a kick returner doesn't believe he can get to the 20 yard line, he should down the ball in the end zone. That's just playing the numbers. There's value in understanding when a player should and should not attempt a return and it seems as if Blount plays his role well.

For reference, Josh Boyce was stopped behind the 15 yard line three times in nine attempts. His yards per return is slightly above the league average (23.8), so you can just imagine how other returners fare. Of the 1360 returns in 2013, 214 of them resulted in a player stopping before the 15 yard line, for roughly 15.7% of the plays.

Dwayne Harris of the Cowboys, the other returnman that was comparable to Blount in % of returned kicks? He was stopped once on his 28 attempts. 3.6%.

So maybe there's some merit in reducing risk. There are different styles of coaching; while some are more aggressive and will return the ball more frequently, others like Bill Belichick will try to reduce the negative plays in the game.

We can tell this is what Belichick values as it's a constant thread in all facets of the game: don't turn the ball over; take advantage of high percentage plays on offense; force turnovers; don't break. Limit the underside risk.

We can see how Blount falls into the role of Belichick's ideal kick returner. He may not ever go the distance, but when he runs he'll go far. He limits the risk for bad decisions and runs when he's assured of adding value. Blount's average of 29.1 yards per return is the best in franchise history, almost a yard and a half greater than Ellis Hobbs.

While Blount's still on market, with little interest, perhaps he's worth some value coming back to New England. Never mind his value as a running back; the Patriots haven't had a kick returner like Blount in a long, long time.