Finding Sammy Morris: Who Can Be the Big Back?

The Patriots have had plenty of success with bigger running backs and they're on the prowl for their next target.

Share All sharing options for: Finding Sammy Morris: Who Can Be the Big Back?

These are the running backs, and their respective weights, who have led the Patriots in carries for short yardage situations since 2001. These are the players tapped to gain those one or two yards needed for a first down carry.

None have been more impressive than Sammy Morris.

You'll remember him from 2008, where he stepped up in the stead of an injured Laurence Maroney. A 31-year-old journeyman who wasn't supposed to be a key player after two lackluster careers with the Bills and the Dolphins.

Yet if you look at the list of Patriots running backs with 20 or more carries in short yardage situations, you'll find Sammy Morris comfortably at the top. Creating a list of those with 60 or more carries?

Seven running backs spanning 14 seasons. You might not be surprised to see Kevin Faulk at the top of the list for converting first downs, but what about Laurence Maroney? Or what about how Stevan Ridley fares next to BJGE or Antowain Smith (not too different)?

I originally started out trying to point out the decline of the Patriots interior line. The line posted the second highest yards per carry in the Belichick era at 4.39 (08: 4.43), yet they seemed to fall short when needed the most. This is the team's yards per carry in short yardage situations (two or fewer yards to go): 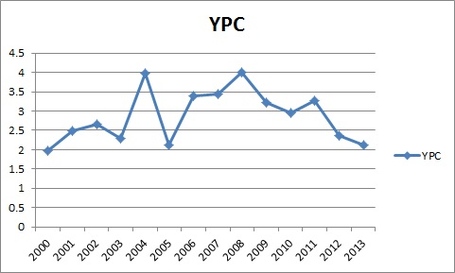 The team's been average nearly half of what it was in 2008. There is no coincidence that this time frame coincides with the decline in center Dan Koppen and right guard Stephen Neal, both of whom the Patriots haven't been able to replace. The spike in 2011 is Brian Waters. That's the caliber of player the Patriots need on the interior.

These rates are alarming. Add in that Tom Brady was sacked more times in 2013 (40 sacks) than in any other season since he became the starter in 2001 (41 sacks) and this line is in greater trouble than anticipated. The return of Ryan Wendell and Dan Connolly mark a continuance of the status quo. That level of performance cannot be accepted.

But those are numbers I wanted to present. Instead, I was just too befuddled by Sammy Morris's incredible rate of performance. I had to share it. Sure, you can remove his largest run to draw him back into the pack with Maroney and Faulk, but eliminating the top play from each back still leaves Morris far ahead.

You remember Morris in short yardage plays. The Patriots would feature two players in the backfield, one feigning the lead blocker role. The upback would receive the hand-off every time, slam into the interior line, and fall short of the first down. That back was always Morris.

Yet somehow he finds himself at the top of the list.

The Patriots need to find themselves another Morris. Having a player who can assure the drive is extended is a crucial player to have, perhaps up there with kickers and punters. The team has been working out numerous backs in the draft with the hopes of adding to the depth of the stable.

Until the offensive line can fix itself, the Patriots are going to need a big back. Not purely in size, although that assuredly helps. They need a back who can deliver when called upon, who can fight for the yards that the interior line won't be able to provide.

They need a Sammy Morris more than ever. I wonder who it will be.